Lessons of Maria Butina: Are men too easily flattered by young women to be trusted with power?

Should men be allowed to have power at all? Latest scandals in TrumpWorld suggest they simply can't be trusted 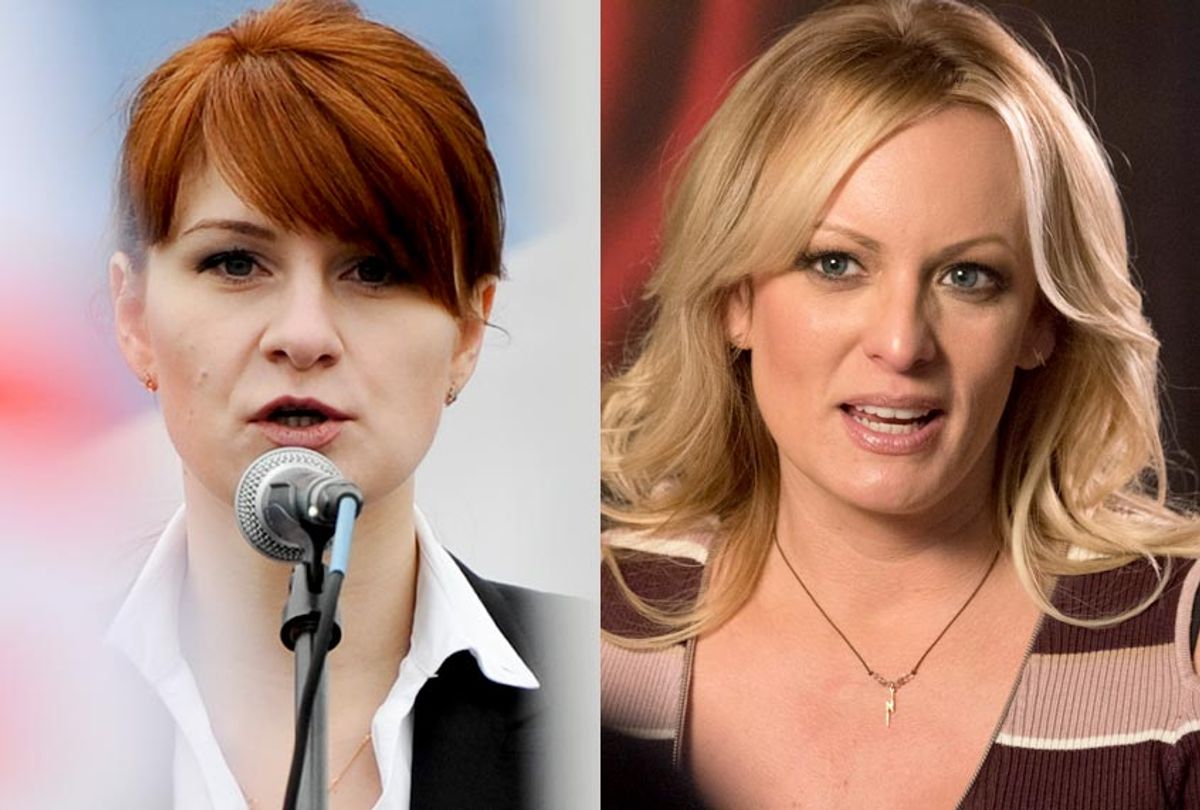 Overall, the various scandals involving Donald Trump, his associates and Russian agents tend not to bring to mind sexy spy thrillers so much as screwy comedy. One theme, however, would fit just as comfortably in classic film noir as in absurdist comedy: Powerful, aging men brought low by their own pathetic desire to believe comely young women are really into them.

While there's no telling what special prosecutor Robert Mueller — or any of the other federal investigators pulling various strings in TrumpWorld — might eventually discover, much of what's coming out right now is a direct consequence of this male peccadillo, nurtured into being by a world that offers undue flattery to powerful and wealthy men so often that they start to buy it.

Trump is personally under suspicion for a large number of crimes, but the one that's come most clearly into focus in the past month involves his role in paying off women to stay silent about their past sexual encounters with him. His former lawyer, Michael Cohen, has pled guilty to his role in this and has publicly insisted that Trump knew exactly what they were doing. Now it appears that David Pecker, CEO of the company behind the National Enquirer -- which helped pay off Trump's alleged mistresses -- also seems to be cooperating with authorities.

"It may have been the least impressive sex I'd ever had, but clearly, he didn't share that opinion," Daniels wrote of her encounter with Trump. Instead, it seems Daniels was hanging around Trump in hopes of getting a TV deal, and acquiesced to the sex because she thought it might help get her what she wanted.

Why the Trump campaign wanted to cover this up at all has always been a bit of a mystery, since Trump has never tried to conceal that he's a lech. But it appears the cover-up was part of a larger strategy of portraying his marriage to Melania Trump, 24 years his junior, as a love story for the ages, instead of a transactional relationship between a rich celebrity and a failed model.

That effort continues to this day. In an interview with Melania Trump on Fox News Thursday, Sean Hannity asked when she knew Donald was the one. She recited, "We had great chemistry when we met in 1998, we started dating, we dated for a long time before we got married, we got married, we had a son, but we had great chemistry from day one." So convincing!

Why does it even matter why the Trumps are together, or at least why does it matter so much so that Trump was willing to dish out huge amounts of money to protect this love story narrative? Part of it likely has to do with appealing to the Christian right, which can be a tad touchy about the institution of marriage. But part of it probably also has to do with flattering the sensibilities of the Trump base, the majority of which is made up of older white guys who would themselves like to believe that Melania loves Trump for his dashing good looks and delightful company.

On Thursday, apparent Russian spy Maria Butina pled guilty to an illegal conspiracy to influence American politics while hiding her status as an agent for the Kremlin. Butina's mission involved creating friendly relations between the Russian government and Republican figures and organizations, including the NRA and Donald Trump. And the government case against Butina suggests that she relied heavily on the desire of older Republican men to feel that a hot young woman was attracted to them in order to get the job done.

The most obvious target of this was Paul Erickson, a Republican consultant who was in his 50s when he met then-25-year-old Butina. They started dating and she eventually moved in, all while getting him more and more involved in efforts to forge links between the Republicans and the Russians, and even an attempt to set up backchannel communications between the Kremlin, the Trump campaign and the NRA. Butina's lawyers have portrayed the affair as sincere on her part, and perhaps it was, though it's worth noting that this was part of a defense strategy of trying to minimize the evidence suggesting that Butina was cultivating an asset.

What we do know is that government filings against Butina expressed deep skepticism that her love was sincere, instead arguing, "Butina appears to treat it as simply a necessary aspect of her activities" and noting that in papers seized by the FBI, "Butina complained about living with" Erickson and "expressed disdain for continuing to cohabitate with" him.

Flattery and flirtation were at the forefront of Butina's strategy generally, as Molly Roberts of the Washington Post wrote in July:

"She had an extra button or three unbuttoned,” said one female activist who dined with her. A handful of additional descriptions include the word “flirtatious.” Her Instagram also showed that she exercised and cooked, and it included overtures to men whose hearts had "been broken.” She had gun photos, too. She was baring less skin in them than your typical gorgeous gun girl, but then again, she was going after the Republican notables, not bros on the Internet.

To be clear, Butina wasn't some world-class seductress. She didn't need to be. Such was the thirst of her targets that some ham-handed eyelash-batting seemed to have done it. Any woman under 30 with a pulse and a lack of shame, it appears, could have pulled this off.

The moral of this story should be obvious: The patriarchy is a threat to national security. There are all sorts of moral reasons why it's wrong that our society treats aging women like old hags and flatters men with lies about how they're like fine wines. But this is about more than lofty philosophical arguments about gender justice. This is about the immediate and hopefully obvious dangers of giving so much power over to a group of people who are ready to hand over the car keys and the deed to the farmhouse the second a young lady makes goo-goo eyes at them.

Not all men are idiots, of course. It's hard to imagine, for instance, Barack Obama being brought low because a 25-year-old woman flirted with him. Still, we cannot escape the conclusion that we need to find another gender to take the reins of power, perhaps one whose aging members are not flattered and told their sexual appeal to 20somethings remains unchanged with time. It's time, in other words, to let women take over.