A child's death in U.S. custody highlights the widespread corruption and failure of border authorities 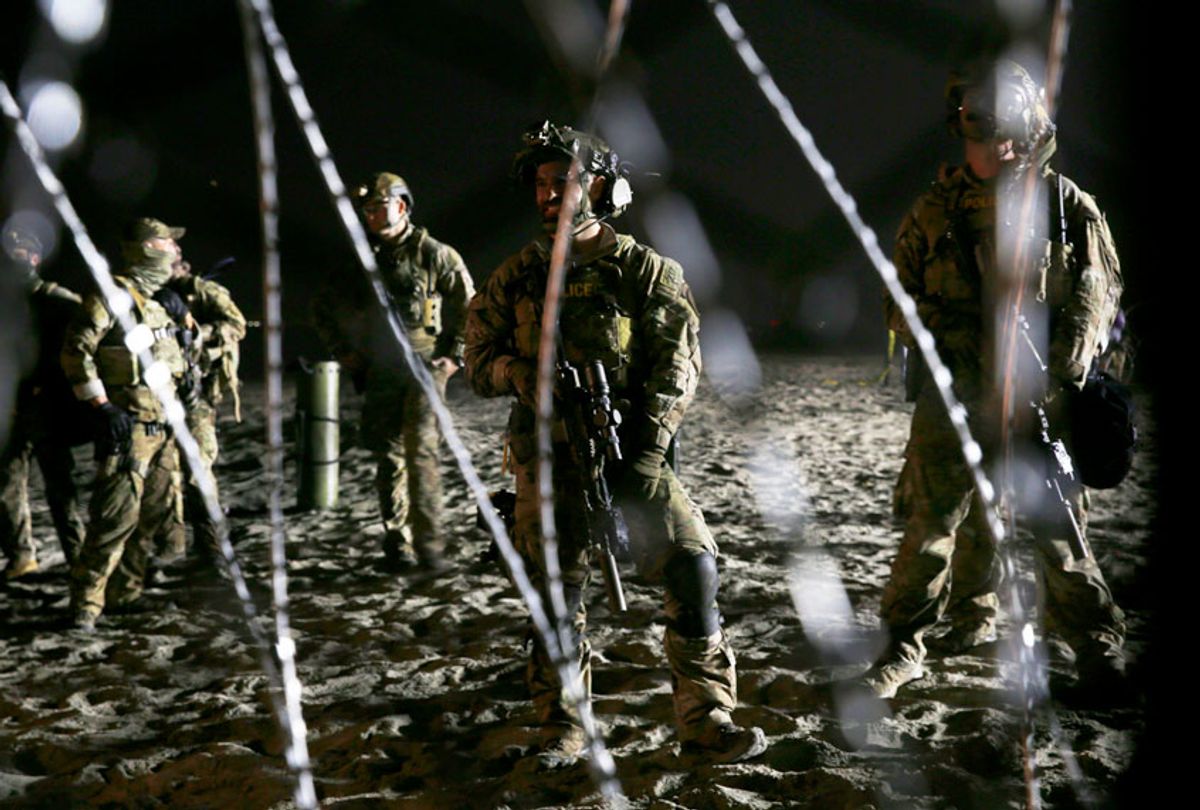 U.S. Border Patrol agents stand on the U.S. side of the border. (AP/Marco Ugarte)
--

Controversy continues to mount over the death of Jakelin Caal Maquin, a seven-year-old girl from Guatemala who died in U.S. custody. Jakelyn crossed the U.S.-Mexico border on Dec. 5 with her father at Antelope Wells, New Mexico, where they turned themselves in to the Border Patrol, along with a group of more than 160 migrants.

Defenders of the Border Patrol and Customs and Border Protection (CBP) are putting blame on the girl's father for taking her into a treacherous part of the border region, instead of using a legal port of entry that is closer to food, water and medical care. Critics, however, point out that Donald Trump's administration is slow-walking people who try to enter legally, forcing desperate migrants to seek other ways to enter the country. In addition, much remains unknown about how the child was treated in the nine and a half hours between when the family turned themselves in and when she finally received medical treatment.

Regardless of the specifics of how CBP treated this girl in custody, this entire debacle should draw more attention to the endemic problems — going back at least as far as the George W. Bush years, if not well before that — in how the southern border is being managed by CBP.

During the Trump years, there's been an escalation of attention paid to the abuses of Immigration and Customs Enforcement (ICE), which handles interior enforcement. The "abolish ICE" movement, calling for the agency to be dismantled, has grown rapidly in popularity. What was once viewed as a fringe left-wing position now has leading Democrats like Sen. Kirsten Gillibrand of New York getting involved. It's high time there was a similar movement against the CBP and U.S. Border Patrol. These agencies can't be eliminated entirely — every country needs some control over customs, travel and immigration at airports and other ports of entry — but it's high time to radically rethink the border security apparatus.

The Hollywood-fueled image of Border Patrol agents chasing down people as they try to sneak across the border simply has no relationship to the current situation on the border. Instead, Rickerd said, people largely turn themselves in to Border Patrol, hoping they can seek legal asylum. Instead of "walls and equipment from theaters of war," he argued, border infrastructure should have a more humanitarian focus, with  "child welfare professionals" and "experts in trauma" tasked with processing migrants, rather than border agents with loaded guns and a law enforcement perspective.

Border security on the U.S.-Mexican border has long been way over-militarized, as I can testify from personal experience. There's a border checkpoint on Interstate 10 between El Paso and Van Horn, Texas, where my family had to stop literally every time I visited my father as a teenager. The purpose of the checkpoint is ostensibly border security, but the reality is that most people going through it are traveling from one part of the country to another. It often seems that agents there spend more time snagging musical acts on tour buses for marijuana possession than they do on actual border security.

Things got much worse during the Bush administration , which was empowered by the terrorist attacks of Sept. 11, 2001, to drastically escalate the amount of border security. Both CBP and Border Patrol doubled in size between 2003 and 2009. But it's deeply questionable whether this build-up did anything to reduce the number of undocumented immigrants, which continued to grow during that period.

“Rather than stopping undocumented Mexicans from coming to the U.S., greater enforcement stopped them from going home,” Princeton sociologist Douglas Massey said of his research showing that enhanced border security ended a traditional border culture where workers went back and forth from the U.S. to Mexico as seasonal work dictated. Instead, people chose to relocate permanently rather than keep running the risk of getting caught.

The Trump administration has only made things worse, not only by trying to escalate border security, but also drastically slowing down political asylum requests at legal ports of entry, in an obvious bid to keep people from exercising their legal right to apply.

"When you militarize the border, including constructing border walls, desperate migrants will attempt to cross in the harshest desert regions, and people die," ACLU of New Mexico Executive Director Peter Simonson said in a statement.

The Bush-era hiring spree at CBP led to a massive decline in hiring standards, reductions in training and far less investment in background checks.

"Lack of accountability, and a culture of cruelty within CBP, have exacerbated policies that lead to migrant deaths," Cynthia Pompa, advocacy manager for the ACLU Border Rights Center, said in a statement.

More than 170 agents have been arrested for various crimes since 2002. The most dramatic example, of course, is that of Juan David Ortiz, a Border Patrol agent who was literally a serial killer, and who allegedly murdered at least four people in the Laredo, Texas, region. That came not long after another Laredo Border Patrol agent, David Villarreal, was arrested for sexual assault.

Those are the the ones who have been arrested: By many accounts, the corruption is far more widespread than that. In 2016, a coalition of civil rights groups filed a complaint alleging all manner of abuses by CBP officials, including manhandling an 11-year-old child so badly they broke his arm, holding a pregnant woman for six hours without access to water, and harassing a feminist activist from Ciudad Juárez, Mexico, on claims that she was a prostitute and had venereal diseases. That same year, CBP settled a lawsuit with a New Mexico resident who was detained in El Paso and allegedly forced to undergo hours of strip-searching, including vaginal and rectal exams.

Under Trump, CBP has dramatically increased the number of migrants, especially minors, being held in detention. There are now a staggering 15,000 children being held in overcrowded detention camps. The ACLU has released documents accusing border agents of all manner of human rights abuses against children, including threats of sexual violence, kicking and ignoring a pregnant girl who was in pain.

The enforcement-at-all-costs attitude of CBP and Border Patrol, Rickerd said, "is not only completely contrary to actual conditions at the border, but unfortunately has tragic consequences," because agents are poorly prepared for humanitarian emergencies. While we still don't know much about Jakelyn Maquin's death, he argued, its circumstances of it — people who have been traveling for hundreds of miles are shoved into a storage facility and held for hours in miserable conditions — illustrates that even when CBP and Border Patrol mean well, they are not equipped to deal with the realities of the refugee crisis of the southern border.

So yes, the "abolish ICE" movement has been politically transformative, perhaps to the point where that agency can be disbanded in the not-too-distant future. But far more needs to be done. The entire way that the southern border is managed needs to be radically changed. No matter how much Trump bellows about it, the border has almost nothing to do with crime and keeping it out. It's about dealing with fellow human beings who need our care and compassion, and our systems must be changed to reflect that reality.