Sam Bee's "Full Frontal" moral compass: Why her brand of comedy is more important than ever

Samantha Bee hosted "Christmas on I.C.E.," encouraging us not to lean away from empathy over the holidays 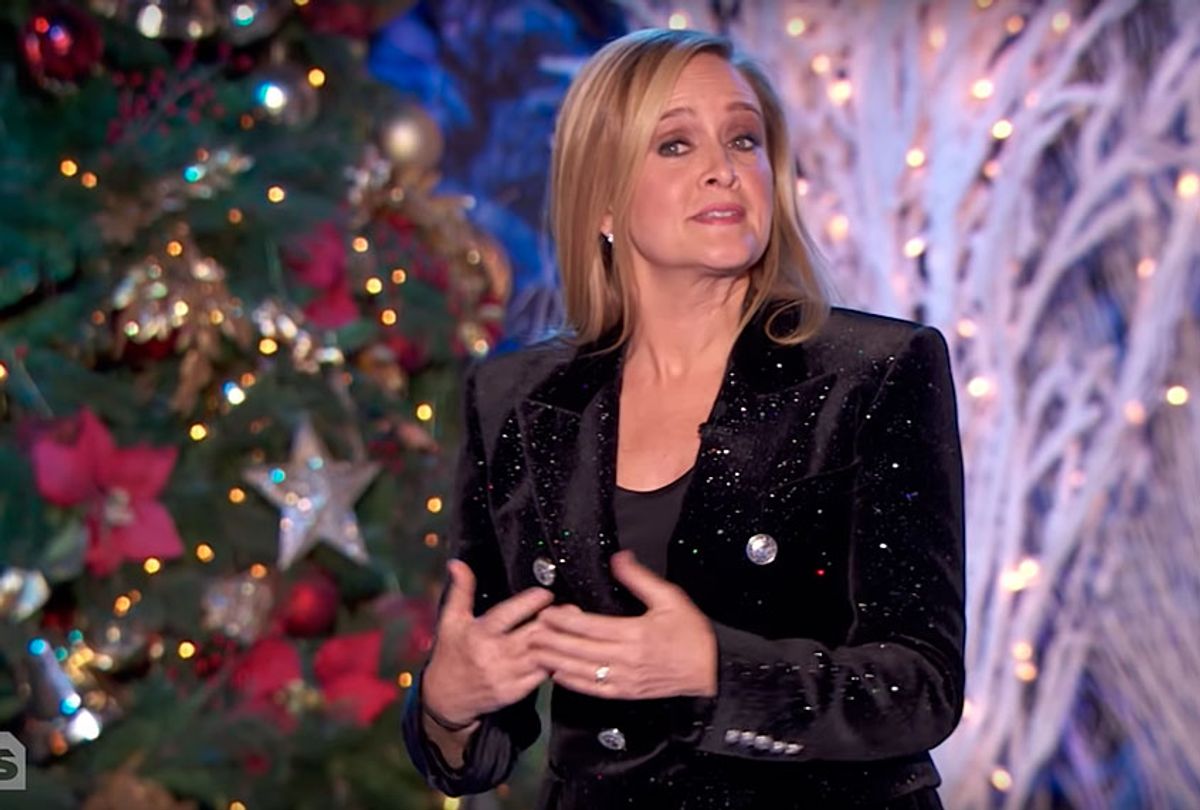 "Full Frontal with Samantha Bee" aired its holiday special Wednesday night, titled "Christmas on I.C.E." With immigration and the treatment of migrant families staying prominent in national news coverage this year and a regular topic on "Full Frontal" as well, it made sense that Bee would end the year reminding viewers that whether we celebrate Christmas or simply enjoy some time off and spend it with loved ones, we shouldn't forget the many migrant families whose lives remain in limbo.

"The reason I'm here doing a Christmas special tonight with a bunch of tasteless I.C.E. puns locked and loaded is that this is a tremendously difficult time to be an immigrant in America," Bee said from atop an ice rink with graceful "Abolish I.C.E." skaters twirling and gliding below her. "I'm sure you remember the family separation crisis this summer. What you may not know is that 50 of those families still haven't been reunited."

"And even the families that are back together face an uphill battle," she continued, against a background of heavily adorned Christmas trees. "The Trump administration is doing everything it can to make it more difficult for refugees, from forcing them to wait weeks or months in Mexico, to tweeting deranged nonsense about the caravan, to barring domestic violence victims from claiming asylum."

As Bee listed off the atrocities to which the Trump administration (and previous administrations, too) have subjected migrant families, most of whom are fleeing violence and poverty at home, there were no jokes to buffer the truth. She didn't just read off horrific facts in a somber tone, Bee's face and body revealed her authentic reaction — part astonishment, part dismay — at the way America treats those who are most vulnerable. She took a deep breath before she finished her thought. "I'm worried that we have lost our compassion," she said. "Just last week, seven-year-old Jakelin Caal Maquin died in border patrol custody."

While Bee's special was filled with funny jokes and field pieces, it also demystified and dispelled misconceptions about the asylum seeking process and underscored the heinousness of I.C.E. tactics, like the arrests of hundreds of potential sponsors who applied to take custody of unaccompanied, detained migrant children. "Christmas on I.C.E." also revealed that most of the people harvesting our nation's Christmas trees are in fact migrants themselves — some undocumented — and that I.C.E. has been known to raid those workplaces, too. (Who's actually waging a "war on Christmas," Fox News? the special questioned.)

With this special and beyond, "Full Frontal" continues to demonstrate how much of a necessary voice Bee is in this political climate. This has been true all year, but even in a time of year when cozy and traditional programming takes over, Bee and "Full Frontal" refuse to let us off the hook by encouraging privileged holiday escapism as an estimated 40,000 people remain detained in migrant detention centers.

Bee isn't the first to tie that message during the holidays in an attempt to amplify the plight of those who can't be with their families, as Black Lives Matter protests in and around airports in 2015 showed us. One took place in the days leading up to Christmas in Minneapolis, during which activists demanded we not forget the black people who had been shot and killed by the police and how their families would then have to endure the holiday without them. Black Lives Matter demonstrators stormed the Mall of America and clogged a St. Paul airport terminal, succeeded in shutting it down and delaying travel on one of the busiest times of year. The stoppage provided a temporary glimpse into family separation; however, for those killed by the police that separation is irreversible. The migrant crisis is part of this human rights continuum, in which state violence, whether via I.C.E. or the police, tears families apart, temporarily or for good.

"Christmas on I.C.E." also underscores another important lesson for the media — every story also needs to account for or acknowledge those who aren't in the center of the conversation, too. Any broad Christmas story is going to be incomplete without remembering those who aren't free, including the tens of thousands of incarcerated people detained in migrant detention centers or the more than two million people inside America's jails and prisons.

Last month, Canadian journalist Sunny Dhillon wrote about his sudden decision to leave The Globe and Mail, considered by some to be Canada’s paper of record, after working there for eight years. In his story "Journalism While Brown and When To Walk Away," Dhillon explained that after a civic election in which the city voted in a nearly all-white council, he was assigned a story, which at first seemed to focus on this racial disparity. But according to Dhillon, that quickly morphed into a demand from the bureau chief that the story must only spotlight the majority of women elected, who were all white.

I had told the bureau chief I would, of course, mention the electing of the eight women. How could I not? How could a story about who didn’t make it to council not mention high up who did? But the public discussion seemed to centre on the fact a city in which 45 per cent of people are of Asian descent did not have a single such person on council. It seemed more a story of who was not represented than who was. I felt we were making a choice that would undercut the voices of people of colour [sic]. This, to me, did not seem a story of triumph.

Dhillon says his concerns were dismissed by his boss; according to him, she said the newsroom is "not a democracy."

The story spread past Canadian borders through social media, as emblematic of journalism's diversity problem, which manifests in myriad ways. The need for diverse people and perspectives is not just about representation; it has a major impact on an institution's strength, vision and product.

While Bee is the face of "Full Frontal," she has prioritized hiring a diverse, inclusive staff whose backgrounds and lived experiences speak directly to the issues front and center of the news. And in addition to amplifying marginalized stories, the jokes on "Full Frontal" often emphasize how "comedy makes life’s most unbearable moments survivable," as my colleague Melania McFarland wrote.

At the end of "Christmas on I.C.E.," surrounded by the Abolish I.C.E. skaters and the rest of her crew, Bee said, "In a lot of Christmas specials, this would be the time when I learned the true meaning of Christmas. But I already know it."

"On Christmas we celebrate the birth of a man whose message was one of radical kindness," she continued. "If you're not doing your best to show compassion for the poor, the weak, the sick, and yes, the immigrants, then you are doing Christmas wrong, I don't care what the hell is on your Starbucks cup. Anyway, Jesus loves me and hates Fox News, bye!"