Shareholder capitalism and the slow death of U.S. manufacturing 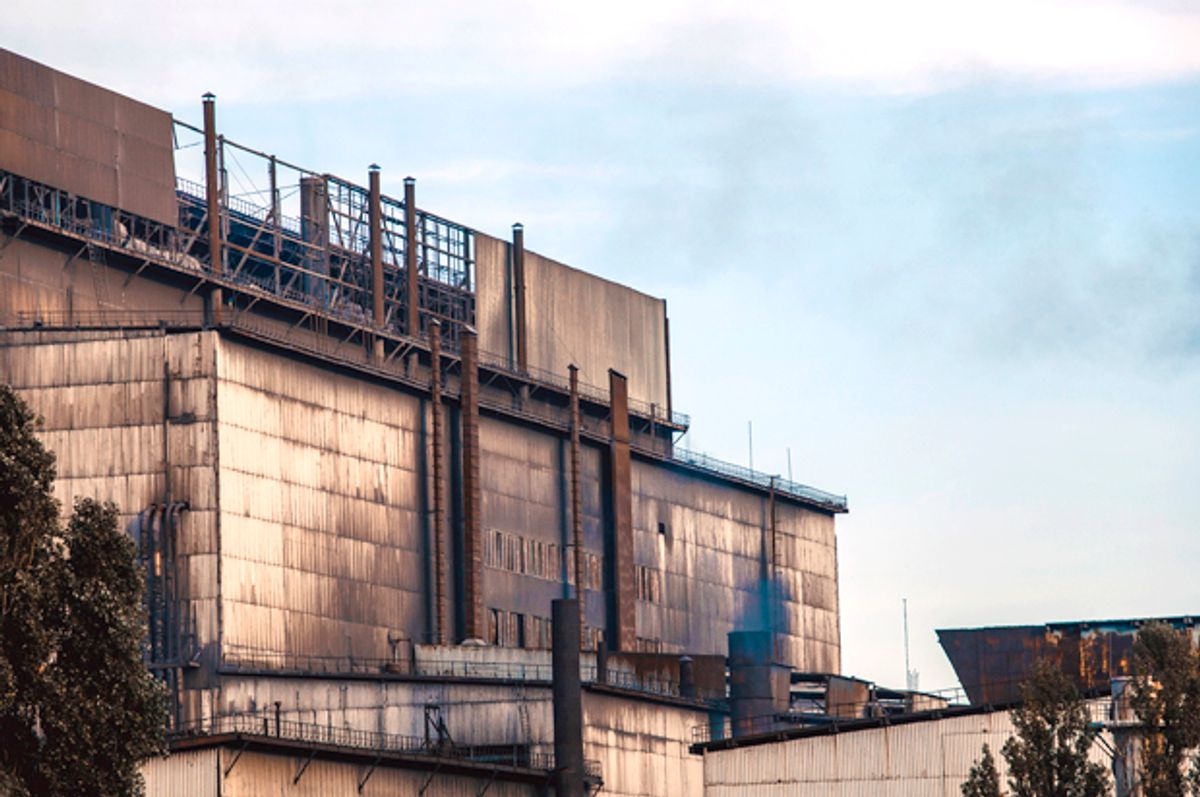 It’s part of the American experience to find yourself in an elevator, in an airplane terminal, or at home, looking at a screen with stock numbers whizzing by, and people yammering about how America is somewhere on the spectrum between wonderful or about to disintegrate because of a 5 percent swing in Boeing or Microsoft stock. How did we get to a national economic conversation that is dominated by chatter on the rise and fall of stocks, when it’s just a small part of economic life for most of the 300 million people who live in this country?

American-style shareholder capitalism, with its incessant focus on maximizing stock value, started gaining primacy over European/Japanese-style stakeholder capitalism in the 1980s. It was premised on a notion best epitomized by Milton Friedman that the only social responsibility of a corporation is to increase its profits, laying the groundwork for the idea that shareholders, being the owners and the main risk-bearing participants, ought therefore to receive the biggest rewards. Profits therefore should be generated first and foremost with a view toward maximizing the interests of shareholders, not the executives or managers who (according to the theory) were spending too much of their time, and the shareholders’ money, worrying about employees, customers, and the community at large. The economists who built on Friedman’s work, along with increasingly aggressive institutional investors, devised solutions to ensure the primacy of enhancing shareholder value, via the advocacy of hostile takeovers, the promotion of massive stock buybacks or repurchases (which increased the stock value), higher dividend payouts and, most importantly, the introduction of stock-based pay for top executives in order to align their interests to those of the shareholders. These ideas were influenced by the idea that corporate efficiency and profitability were impinged upon by archaic regulation and unionization, which, according to the theory, precluded the ability to compete globally.

While tying corporate decision-making and its performance to stock price to incentivize efficient resource allocation and productive transformations sounds superficially attractive, the champions of this theory never bothered to show how these outcomes could be achieved if shareholder capitalism was fully implemented. In fact, the historical experience has been abysmal. GM and GE, to cite two prominent examples, were once poster boys for the success of American capitalism. More recently, they are presumed to be speculative candidates for bankruptcy. They are but a symptom of the bigger problem. And there is a growing skepticism in the ability of American capitalism to deliver on its economic promise of prosperity.

In the 1980s, we were still at the embryonic stages of shareholder capitalism, and American institutional investors aggressively proselytized both domestically and abroad. During that time, when I was working as a fund manager in Japan, Toyota became a particularly prominent target, on the grounds that the company wasn’t using its substantial cash pile “productively.” The argument was made that the company’s management was maximizing their self-regarding interests over shareholder value. Holding onto the cash reserves was thought to be a mistake, lest managers be tempted to make unproductive investments. This despite that fact that by any traditional metric — profitability, market share, sales, return on investments — Toyota remained a remarkably successful company.

Backed by domestic institutions (particularly from their associated companies), Toyota’s management resisted the push of the foreigninvestors like myself, many of whom were leading the charge to distribute the company cash pile to shareholders. Toyota management made the seemingly anachronistic decision that the cash was best retained to invest in future lines and cope with changing market conditions, as well as retaining valuable and skilled employees, who were key to the company’s growing productivity and global sales success (even at a cost of some short-term harm to profitability). They also argued that elevating dividend payouts would derogate from needed research and development, which was required to retain the company’s edge over global competitors.

Given that Toyota has retained the ranking of most valuable car brand in the world six years running (in fact, number one in 11 of the 13 years in which the survey has been conducted), senior management’s strategy appears to have been vindicated. There is stable ownership and decision-making structure. Focus is on enterprise-specific skill development and cultivating capabilities in-house. Toyota consolidates product and its production process planning and ensures that sufficient training and equipment (pertaining to processes required for new products) are provided or developed in-house. It largely finances operations using its internal cash flow. Neither stock buybacks nor high-dividend payouts are the norm. In short, the company has developed a long-term development strategy that fuses innovation with high-quality, sustainable management practices that operate durably at scale for many millions of customers around the world.

By contrast, Professor William Lazonick’s seminal study, “Profits without Prosperity,” underscores the notion that top-level U.S. executives, whose incentives have been increasingly based on stock-based financial targets, have lost the ability to develop the innovative capabilities of an enterprise. Instead, spurred by the prospect of stock gains, the executives have channeled their focus toward “short-termist” achievement of targets (such as by giving out excessive loans to finance customers’ purchases to boost quarterly sales targets, as Detroit’s “Big Three” have done repeatedly), increasing share valuations and increasing the variable component of their compensation (via share repurchases). As a result, their enterprises have become financialized, and their balance sheets severely weakened. The shortcomings of the companies that have fallen victim to this trend have been masked by the performance of the company stock, in itself a mirage brought about by financial engineering to boost share prices, as Rana Foroohar has documented in her book, "Makers and Takers."

The focus on short-termism has ultimately degraded the financial health of the corporations concerned, as well as cannibalizing future investment opportunities. As Lazonick pointed out, in many instances where U.S. executives have resorted to stock repurchases, payouts were well above the net income, and in many cases occurred even when the company wasn’t profitable; certainly, there was little correlation to company performance per se. Cash that could be deployed toward creating a better product line has instead been spent on stock buybacks, while the strategy of expanding loans to customers to purchase the underlying product effectively steals from future sales, as well as expanding corporate leverage. Another way companies catered to shareholder capitalism was by selling off capital-intensive, but cash flow-generative businesses, as Jack Welch did when he became CEO of GE and shifted the company focus away from sales of jet engines, nuclear reactors and mining equipment, instead building up GE Capital, which ultimately became another “too big to fail” financial behemoth (and has done much to contribute to GE’s deterioration).

Additionally, a deregulated labor market that allows for “costless” hiring or firing (“costless” only from the perspective of management, obviously, not labor) in reality has reinforced this short-termism and further degraded long-term corporate performance. Executives abuse the “benefits” of a largely deregulated labor market to sack workers with impunity, thereby generating the “free” cash flow that can be used instead for share repurchases, even as the company loses valuable labor expertise, which can generate future production bottlenecks.

One must also question the notion that the stock market is an efficient gauge of corporate performance, especially when management is prone to what Professor Bill Black calls “control fraud.” There is an asymmetry of information between corporate insiders and institutional shareholders, which means that putting a “price” on managerialism so as to discipline them if the management engages in unproductive investments is a fantasy. Exposed to the harsh light of reality, this is an especially absurd idea that only an economist could love, given the divergent time frames between institutional investors monitored on the basis of quarterly performance versus executives who must make investment decisions, the results of which may not be established for years. This is exacerbated by the ludicrous notion that dilettante fund managers, relatively unschooled in anything (other than MBA degrees that propagate concepts like maximizing shareholder value), could possibly be superior judges of corporate performance and allocators of capital against those who have literally learned the business from the factory floor up.

In the “downsize and distribute” regime of American shareholder capitalism, the labor force is downsized, certain operations are discontinued, and the cash retrieved from these processes is distributed rather than retaining and reinvesting in developing the productive capabilities. American executives have proven all too willing to disgorge cash annually on buybacks at the expense of identifying the investments in organization and technology that were needed to remain competitive in the industry in which they operated. In contrast to Germany or Japan, real engineering has been replaced by financial engineering. This is what the doctrine of “shareholder value” has actually delivered: unproductive share buybacks, which manipulate short-term share price performance, even as it derogates from long-term research and development, engenders persistent short-termism in corporate decision-making, and induces value extraction, rather than value creation. All of this financial vandalism has created multiple economic crises, long recessions, growing inequality and decades of stagnant incomes for the average American worker. Shareholder value in truth has created no real value at all.