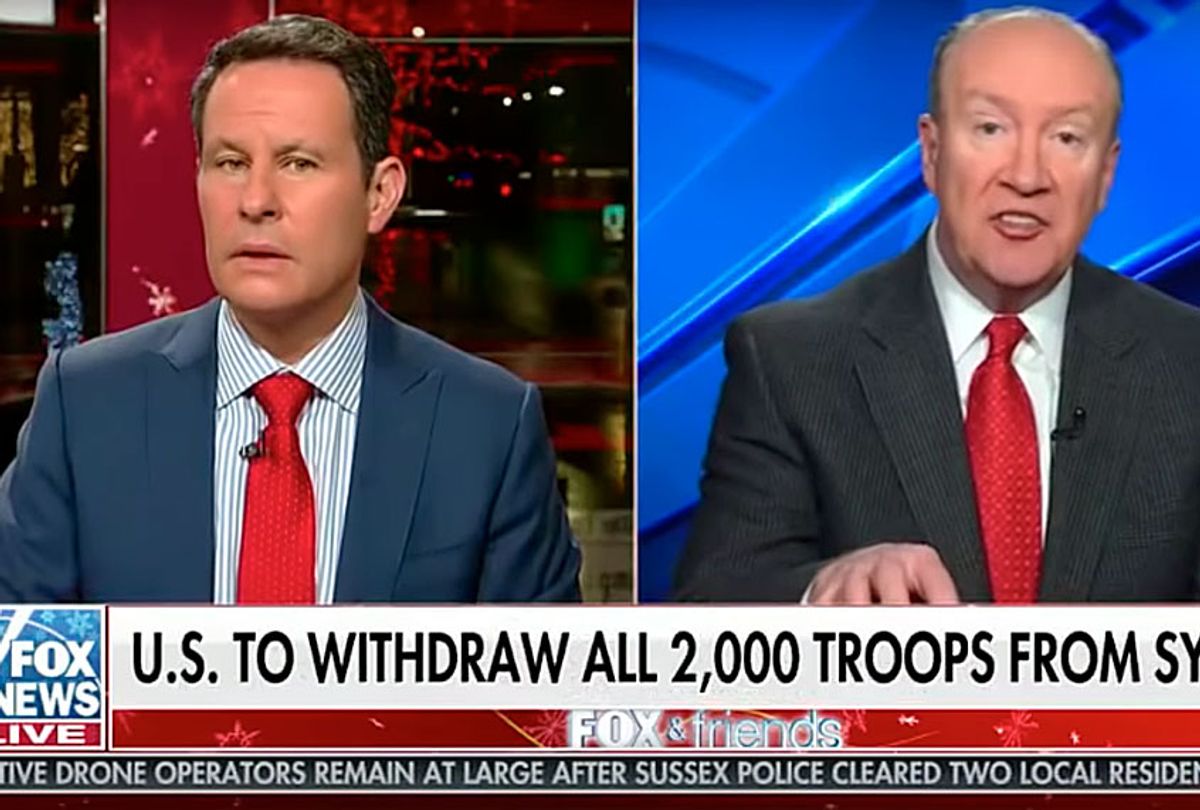 Brian Kilmeade, the host of President Donald Trump's favorite morning show, "Fox & Friends," continued to rip into the president over his abrupt announcement that he wants to withdraw all 2,000 U.S. troops from war-torn Syria on Monday — a decision Kilmeade has warned in recent days would allow the Islamic State group, also known as ISIS, to re-establish its reduced power.

Kilmeade, who often defends Trump on television but has been one of the network's most outspoken critics of the president's decision, then said, "When ISIS is looked at as losing and we are putting heavy damage on them in a way that President Obama can only dream of, President Trump was doing huge damage and terror threat diminishes at home."

"We're not looking to settle a Syrian war. We almost lost the country of Iraq. They were outside Baghdad until we armed the Kurds and began providing intelligence and information for them," Kilmeade continued.

“Can you name an adviser the president has that recommended he pull out 2,000 troops?” Kilmeade asked White House spokesperson Mercedes Schlapp.

“I’m not going to get into the internal discussions of how the decision was made," Schlapp said, declining to answer the question. "At the end of the day, we all serve in the position of advising the president. It is up to the president to make the final decision.”

“We knew from the moment he started his campaign where he stood on Syria,” she continued, “and that was to ensure the defeat of the territorial caliphate in Syria — and the president and this administration and these troops have done that.”

Trump's decision has prompted confusion and alarm in Washington and beyond. Just a day before Trump declared ISIS was defeated, State Department deputy spokesman Robert Palladino said, "We've made significant progress recently in the campaign ... but the job is not yet done." In addition, Defense Secretary James Mattis, who did not agree with Trump's thinking and decision on Syria, announced his resignation Thursday.

Kilmeade on Monday connected the sudden withdrawal of troops and Mattis' sudden resignation to the threat of terrorist attacks at home, citing the shooting in San Bernardino as an example.

"What President Trump has done is great. But what he is going to do early is a classic America pull the foot off the throats early and it's going to make everyone's security more perilous."

Trump, during the 2016 presidential campaign, accused former President Barack Obama of being the "founder of ISIS" because of the power vacuum critics contend Obama established after he withdrew U.S. troops from Iraq in 2011. "He was the founder," Trump said at the time. "His, the way he got out of Iraq was that that was the founding of ISIS, okay?"

Kilmeade noted last week that ISIS still has thousands of fighters in the region despite the fact its power has been diminished due to a loss of territory across Iraq and Syria.

"The president is really on the griddle with this," Kilmeade said.

Trump, meanwhile, has attempted to walk back his claim that ISIS had been totally defeated, and suggested that other countries, including U.S. allies, will have to confront ISIS on their own.

"Does the USA want to be the Policeman of the Middle East, getting NOTHING but spending precious lives and trillions of dollars protecting others who, in almost all cases, do not appreciate what we are doing? Do we want to be there forever? Time for others to finally fight," Trump wrote on Twitter.