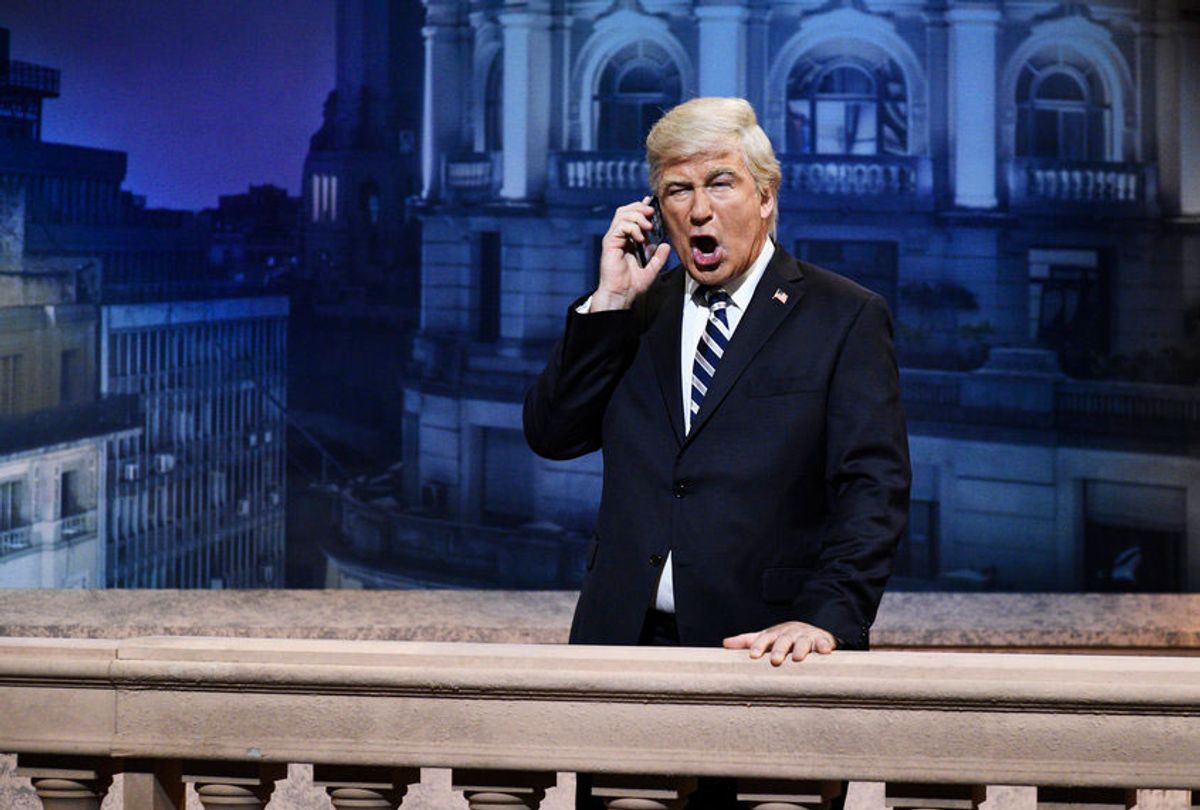 Because President Donald Trump regularly attacks "Saturday Night Live," the venerable comedy franchise can't simply be viewed as another pop culture property right now. Whether you love it or hate it, the show is standing up for basic American ideals — particularly those involving First Amendment liberties — every time it ridicules the president and draws attention to the underlying phenomena that led to his rise to power.

It is with this sobering reality in mind that, perhaps paradoxically, this list of the best political "Saturday Night Live" sketches of 2018 was compiled. Bear in mind that the criteria for this list only requires a sketch to have been released in the year 2018, which means that it includes part of Season 43 and all of Season 44.

While one joke in this sketch got Pete Davidson in trouble (more on that later), the larger point being made here was actually a rather insightful one. Playing himself, Davidson poked fun at his own political ignorance by making superficial observations about New York Governor Andrew Cuomo, New York Rep. Pete King and Florida Republican Senate nominee (and then-governor) Rick Scott. Instead of joking about their politics, however, Davidson acknowledged that he isn't exactly a political animal and focused on sillier quips, like, "he looks like if a cigar came to life." The humor here was derived not just from the one-liners, but from the fact that to millions of Americans, politics is so peripheral to their existence that their awareness of the candidates probably can be reduced to such trivialities.

When I interviewed comedian David Cross in October, he predicted that the infamous Oval Office meeting between Trump and rap star Kanye West would be forgotten in 72 hours. He may be correct in the long-term scheme of the things — when a president is embroiled in a multifaceted federal investigation such as Trump's, the fact that he had a bizarre meeting with a celebrity fan probably should fade into the obscure recesses of our collective memory — but I hope this memorable sketch continues to be watched. Like all good "Saturday Night Live" political sketches, it works for three reasons: the impersonations are spot-on, from Alec Baldwin's award-winning portray of Trump to Chris Redd's wide-eyed West and Kenan Thompson's incredulous Jim Brown; the comedy is funny even if you're completely unfamiliar with the Trump-Kanye summit; and the script is reasonably close to the weirdness of what actually happened, from West's incoherent rambling to Trump's obvious discomfort. The only flaw here is that the sketch also used West's mental illness as a punchline, which I've discussed before; this problematic detail prevents the segment from rising to greatness.

Casting Robert De Niro as special counsel Robert Mueller and Ben Stiller as former Trump lawyer and fixer Michael Cohen were masterful strokes on the part of the "SNL" creative team, with those choices culminating in this sketch recreating the famous polygraph test scene from the 2000 comedy hit "Meet the Parents." While De Niro interrogated Stiller in that movie to see if he was fit to marry his daughter, on this occasion it is to find out how much Cohen can reveal about his former boss. The one-liners are invariably chuckle-worthy (my favorite: "I’ll start with some easier questions. How’d you like that peepee tape?") but the sketch's true strength lies in its eerie foreshadowing. Eight months after it aired, Cohen would receive a three-year prison sentence for his role in spending illegal hush money to cover up the future president's alleged affairs. In other words, the parody of reality may not have been too far off the truth.

There is no one part of this March sketch that makes it so effective. It's the sum of its parts, rather than any one dimension, that works so well. Kate McKinnon's Sessions expressing outrage about violating the rights of a white Christian man instead of the immigrants he'd been appointed to persecute, John Goodman's Tillerson lamenting that "one day you're the CEO of Exxon, a $50 billion company, and the next day you get fired by a man who used to sell steaks in the mail" and Bill Hader's Scaramucci acting — well, like the same colorful Mooch who introduced himself to me for an interview by pretending he thought I was working for Trump/Pence 2020. If there is a single sketch that captured the zeitgeist of American politics in 2018, it was this one.

Matt Damon may have a controversial past when it comes to his relationship with alleged serial rapist and disgraced movie mogul Harvey Weinstein, but he nevertheless hit a home run with his depiction of alleged sexual abuser and disgraced Supreme Court Justice Brett Kavanaugh. Every detail is correct here: The facial tics that made Kavanaugh come across like a petulant child, the overtly partisan wrath that many felt unbecoming of a future Supreme Court judge, the maudlin sentimentality mixed with a cold-eyed unwillingness to actually face scrutiny. While Republicans were insisting that Kavanaugh was a sound legal mind being unfairly tarnished, "Saturday Night Live" saw right through that and revealed an entitled frat boy whose anger stemmed from even an attempt at being denied what he perceived as his rightful place on the court.

5. Pete Davidson apologizes to the veteran he mocked and allows himself to be roasted

There was something genuinely touching about this sketch. It began after Pete Davidson joked that Dan Crenshaw — then a Republican candidate for Congress and, by the time this segment aired, a congressman-elect — looked like "a hitman in a porno movie." Because Crenshaw had lost his eye due to an IED explosion while he served in Afghanistan, many were offended by Davidson's remark, prompting the SNL player to apologize on air. "It was a poor choice of words. The man is a war hero and he deserves all the respect in the world," said Davidson. "And if any good came of this, maybe it was that for one day the left and the right finally came together to agree something . . . that I'm a dick." He then gave time to Crenshaw who gamely mocked Davidson for his recent break-up with Ariana Grande and also joked that Davidson "looks like if the meth from 'Breaking Bad' was a person. He looks like a troll doll with a tapeworm. . . .  He looks like Martin Short in 'The Santa Claus 3.' By the way, one of these people was actually good on 'SNL.'"

4. The midterm ad that resonated with Democrats reeling from post-2016 trauma

It's one thing to lose a presidential election that polls widely predicted was going to turn against you — Democrats losing to George W. Bush in 2004, Republicans losing to Barack Obama in 2008 and 2012 — but there is something legitimately traumatizing about losing when the experts gave you every reason to believe you would win, and when the stakes were higher than in any election in recent memory. "Midterm Ad" played on this fact by parodying Democrats who, despite knowing that polls predicted they would recapture the House of Representatives in the 2018 midterms, were secretly terrified that 2016 would repeat itself. Whether it's Beck Bennett crushing a coffee cup, Jonah Hill giving himself oxygen or Aidy Bryant smacking Pete Davidson for jokingly giving out incorrect information on Voting Day, the suppressed stress on display here was all too real for many opponents of Trump and his agenda.

There are two reasons why this segment from January merits inclusion. The first is that co-hosts Colin Jost and Michael Che both used the expletive "s**thole" on the air even though, as Jost explained, NBC requested that they refrain from cursing. In Jost's case, he refused to self-censor because of the obvious and troubling hypocrisy of arguing that a president using profanity to demean an entire race is acceptable but two mainstream comedians describing that action is off limits. For Che, however, the term "**thole" was used to make a poignant and funny political point (which is the second reason I've included this sketch): "Donald, you do realize how rich these places are in resources? They’re in bad shape because they’ve been robbed and exploited for centuries by Western powers. So the president of the United States calling Africa a ‘s**thole’ is like telling a kid you molested, ‘Boy, did you grow up to be weird.’"

2. Men scared of being called out by #MeToo and #TimesUp need a special antiperspirant

One of the dangers of living in the Trump era is that it's tempting to assume every major political story in some way has to involve the president and his shenanigans. Yet the #MeToo movement and its work to expose predatory men in positions of power was one of the great political stories of our time, and this "Saturday Night Live" sketch celebrates its achievements by plugging a fictional deodorant for men who suspect their own misdeeds are about to be exposed. It's one of the shorter sketches included on this list, clocking in at just over a minute and a half, but this works to its advantage: Sketch comedians often make the mistake of thinking that longer equals better and the end result is bloated instead. This one makes its point with great performances by Will Ferrell, Alex Moffat and Kyle Mooney, then wraps up so quickly that you're still laughing when it's over.

Of course, I'd be remiss if I didn't point out that Trump has also had numerous sexual misconduct accusations against him. Even here, we can't escape him . . .

This has to be ranked as the best political "Saturday Night Live" sketch of 2018 because it showcases Baldwin as Trump and it speaks to a fundamental political fact of this period in our history — namely, the sheer weirdness of Trump being president in the first place. When Trump's supporters claim that his detractors are bitter about Hillary Clinton losing the 2016 election, they're only half-right — it has less to do with Clinton's fortunes specifically and more to do with the reality of an obviously unqualified, extreme right-winger getting elected instead. While the main victim here is America, it is also strange that Trump himself would have almost certainly been better off if he had stayed out of power — the chances are that, even if he hadn't faded into obscurity, he would have at least been free of the massive legal headaches that currently plague him. This is the point that "SNL" makes, identifying how both Trump himself and everyone in his personal orbit would be much happier today if he simply wasn't president. It's an observation so obvious that, like Poe's "Purloined Letter," it's easy to miss — and that's why "Saturday Night Live" deserves so much credit for acknowledging it.