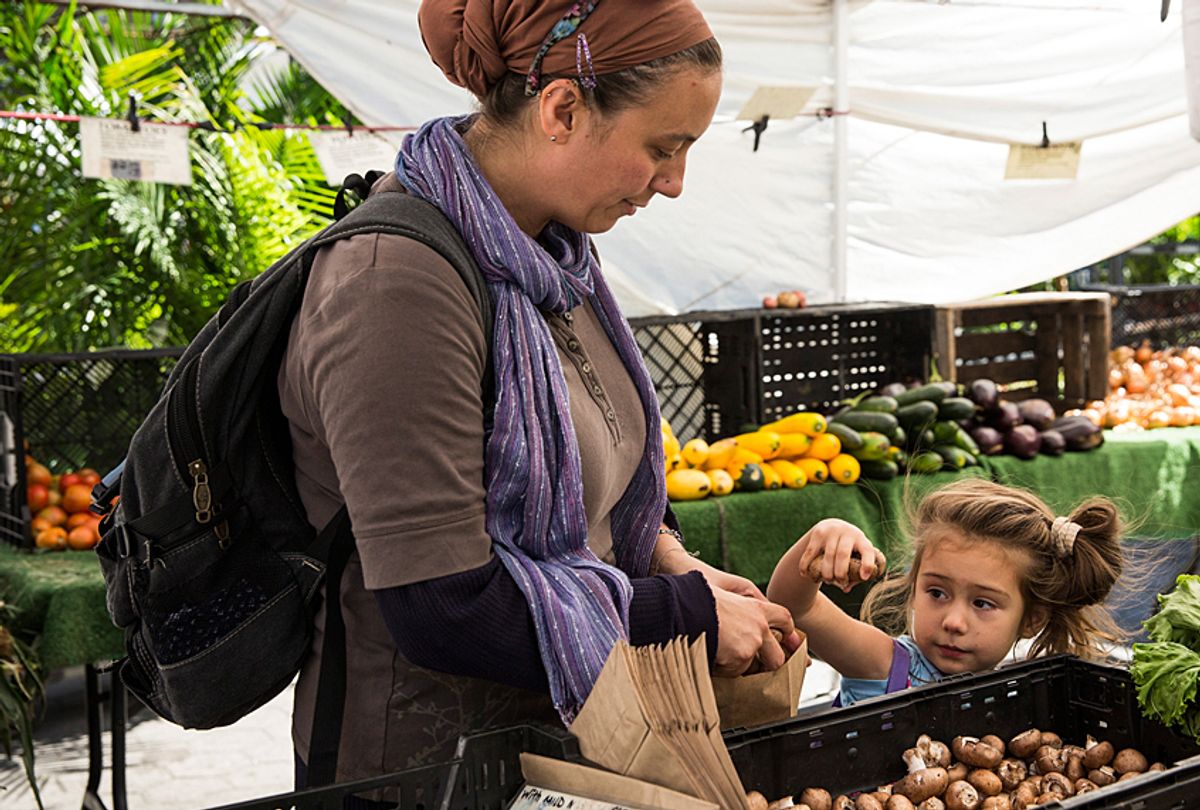 A woman and her daughter shop for groceries using Food Stamps. (Getty/Andrew Burton)
--

The office that oversees the federal child nutrition, Supplemental Nutrition Assistance Program (SNAP) and related programs has been cut by 95 percent as a result of the partial government shutdown.

CNN flagged a statement by the Department of Agriculture, which detailed when certain programs and resources would be affected by the shutdown. According to the breakdown, the office that oversees SNAP as well as the Special Supplemental Nutrition Program for Women, Infants, and Children (WIC), would have its staff cut by 95 percent by Wednesday.

SNAP benefits are expected to remain available in January and Child Nutrition programs are expected to continue into February, if the shutdown continues. But the status of WIC, the Commodity Supplemental Food Program and the Food Distribution Program on Indian Reservations is uncertain. The Department of Agriculture suggested that states will have to turn to local resources if necessary, HuffPost reports.

Agriculture Secretary Sonny Perdue tried to allay worries in a statement Friday attempting to reassure Americans that the USDA will “leverage existing resources” to perform its necessary responsibilities.

“There may be a lapse in funding for the federal government, but that will not relieve USDA of its responsibilities for safeguarding life and property through the critical services we provide,” Perdue said. “Our employees work hard every day to benefit our customers and the farmers, ranchers, foresters, and producers who depend on our programs. During a shutdown, we will leverage our existing resources as best we can to continue to provide the top-notch service people expect.”

The Department of Agriculture added on Twitter that “as the government enters a lapse in funding, we will be maintaining key services we provide to keep people safe. That includes meat, poultry, and processed egg inspection services. Part of our mission to protect the U.S. food supply.”

The shutdown has affected other key departments as well. According to the Department of Health and Human Services, nearly 8,000 of its workers -- about 25 percent of the entire agency -- were cut until the end of the shutdown. Though most of the department has been funded, the positions cut were funded through the Agriculture and Interior departments.

According to HHS, the FDA will continue to respond to emergencies and high-risk recalls and continue to operate its Indian Health Service clinics and response efforts from the Agency for Toxic Substances and Disease Registry while the shutdown continues.

"Thousands of my @HHSGov colleagues routinely work weekends and holidays, and many are tasked with working through shutdowns, to fulfill our mission to protect and enhance the health and well-being of all Americans,” HHS Secretary Alex Azar tweeted Monday.

The FDA website currently displays a message saying “FDA Lapse in Funding.” The message says that "agency operations continue to the extent permitted by law, such as activities necessary to address imminent threats to the safety of human life and activities funded by carryover user fee funds."

All told, around 800,000 federal employees are not being paid during the shutdown and more than half of those will be required to stay home as the shutdown continues. Congress has traditionally voted to pay back the employees who were not paid during previous shutdowns, but that money is not guaranteed.

Most federal law enforcement officials, including FBI agents, customs agents, prison workers and TSA workers, will remain on the job during the shutdown without pay. Active-duty military personnel will also stay on duty but their pay will be delayed.

Despite much uncertainty and hundreds of thousands of families affected, there is no end in sight to the shutdown. President Trump has insisted he will refuse to sign a spending bill that does not include additional funds for his proposed border wall. The Senate unanimously passed a bipartisan spending bill that Trump later refused to sign because it did not contain money for the wall.

"I can't tell you when the government is going to be open,” Trump told reporters Tuesday. “I can tell you it's not going to be open until we have a wall, a fence, whatever they would like to call it."