The real world of the working poor: Here's what politicians all ignore

In my state, Democrats have already bailed on their promise of a $15 wage. Politics seems far from real life 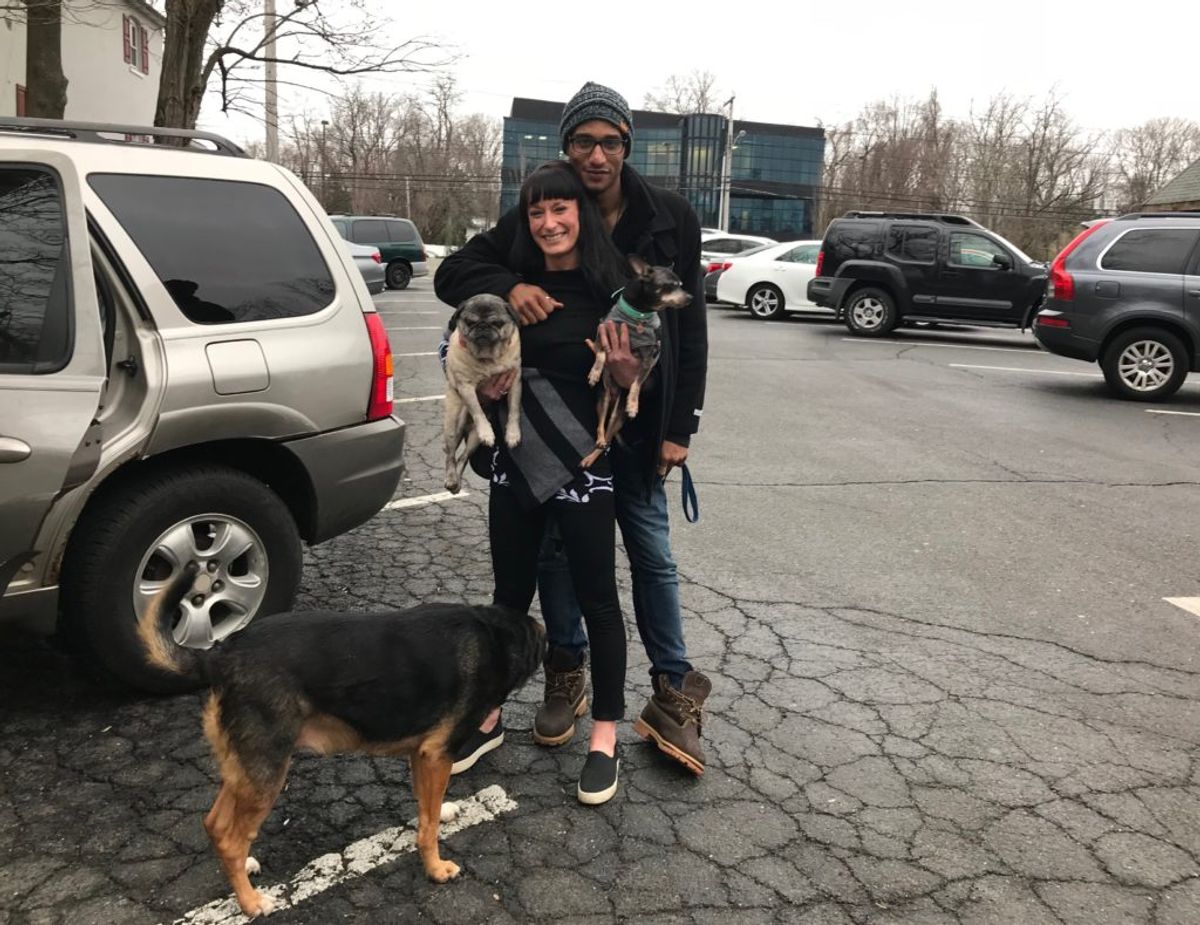 This New Jersey couple, whose families lost their homes to a foreclosure and short sale, told WBGO about their struggle to make ends meet looking for minimum-wage jobs while eluding law enforcement along the Route 38 corridor in Monmouth County. (Bob Hennelly)
--

This article was originally published at Insider NJ. Used by permission.

On Christmas Eve, there’s a climatic whirl everywhere you go. It’s that last minute dash for those that we love. We know that come Christmas Day our good intentions either will become reality or will be sidelined as a promissory note.

So it is the millions of New Jersey residents whose prospects would have been made all the brighter headed into 2019 with a $15 minimum living wage.

No, not this year, perhaps next.

There’s just such a huge gulf between the professional political class -- in New Jersey and elsewhere -- and the families for whom such a pay hike would make all the difference.  In a system that relies on campaign cash from corporate interests, it should come as no surprise that anything that protects profits wins out over people of little influence with limited means.

That’s why when Democrats get around to delivering on their promise there will likely be cutouts and small print exceptions like for farm workers. (That’s just how New Jersey kept slavery alive and well a half-century after passing the supposed  1804 Abolition Act.)

Gov. Phil Murphy is off with his family on a  12-day African safari  while Democrats in Trenton, the state capital, are inwardly focused on playing "Dungeons and Dragons: Who Gets to Be  Their Party Leader ?" At least  Gov. Andrew Cuomo, next door in New York,  canceled his Christmas trip to Puerto Rico so he could stay home and keep the lights burning at the Statue of Liberty, which was going to be shut down by the Trump-tantrum federal government shutdown.

Before  Thanksgiving, I wrote in this space that if New Jersey Democrats wanted to build on the momentum off the 2018 midterms they needed to deliver a $15 minimum wage by Christmas for the hundreds of thousands of poor and working-class families for whom there had been no recovery. They remain most vulnerable to the next recession, which will soon to be upon us with the stock market coming off its worst December since the Great Depression.

For these New Jersey families things have only continued to deteriorate as  wealth concentration  and income disparity have both  surged  to the highest levels in the history of the nation. We continue to live out the consequences of several million American families losing their homes to the predations of Wall Street and the loss of $20 trillion in  household wealth.

The bipartisan, Beltway solution of propping up Wall Street, but letting so much of Main Street sink underwater in places like Michigan, Pennsylvania, and Wisconsin set the stage for Donald Trump’s populist message in just enough places to hand him the Oval Office.

The national media, Barack Obama and Hillary Clinton didn't see it coming because it was playing out in places they didn’t know existed. Their read on the economy was informed by national aggregate unemployment data -- but nobody lives in the aggregate.

One of those dozens of congressional districts that voted for President Obama twice and flipped for Trump was southern  New Jersey’s 2nd district,  which includes some of the state’s  poorest communities,  still bearing visible signs of the Great Recession.

Recently, the United Way released their annual update of what it calls the " ALICE  population":  asset-limited, income-constrained, employed folks who struggle week to week.

According to the latest data, 38 percent of New Jersey’s households live either below the poverty line or in the ALICE cohort. Between 2010 and 2016, poverty remained relatively stable at the 10 percent level. But over that same period the number of New Jersey ALICE families went from 24 to 28 percent, as wages stayed stagnant but costs for the basics rose.

In Cumberland County, where so many of the state’s  underpaid farmworkers  live, the United Way found close to two-thirds of households are either living below the poverty line or find themselves in the ALICE cohort. In Essex County, in urban northern New Jersey, more than half of all households are struggling. In Salem, Ocean, Atlantic and Passaic counties, close to half of all families are just getting by.

In the more than 200,000 households in New Jersey that are headed by a woman, 37 percent live below poverty, while another 39 percent fit the ALICE criteria,  leaving just 23 percent who are not struggling week to week.

According to an analysis by  New Jersey Policy Perspective, a New Jersey family with one child needs a wage of $20.07 an hour to make ends meet. According to the nonprofit think tank, there’s quite a range between the state’s 21 counties — from $17.32 an hour for workers in Camden to $22.26 in Hunterdon.

A boost of the minimum wage “would inject $3.9 billion into the state’s economy  and help over 1 million workers better afford their needs,” according to NJPP. “Today, there is no region of the state where a single worker with no children can afford basic necessities while making less than $15 per hour. The costs of transportation, food and rent are simply too high for a minimum wage worker to afford without suffering in poverty.”

While I was in line at the checkout in the Shop Rite in Chester over the weekend with five of our seven fishes in my cart, I asked the 20something working the cash register what difference making  $15 an hour would make for her and her co-workers.

Her face lit up like it was  Christmas.  “We were just talking about that and it would be a huge raise for us,” she said. “We all start at the minimum wage here.”

A few years ago, I got dumped by CBS News after then Republican National Committee press secretary  Sean Spicer complained about a story I did during the primary campaign about how the GOP brand had been co-opted by Trump’s candidacy. (The story was not inaccurate, and CBS never retracted it, but just took it down off the internet.)

I went from the glamour of CBS’ West 57th Street location to freelance writing and signing up for the night crew at the Acme supermarket in Mount Freedom, where I made $9.10 an hour.

I figured that since it was a union shop I could get health care coverage, but I was always scheduled just a few hours shy of qualifying for full-time status. The guys I worked with were legacy hires whose tenure went back close to 30 years, so their hourly wage was three times what I was making.

They were entitled to weeks of paid vacation but could never take it, because at the low wages now offered nobody would cover for them. Incredibly, the union leadership were making healthy six-figure salaries.

My co-workers on the day shift included single mothers struggling to make ends meet, retirees back in the workforce because they had lost their 401k's keeping their kids in college during the recession, and middle-aged folks who had moved back in with their elderly parents after losing their homes.

These are the people that Washington and Trenton have always ignored since FDR’s New Deal. Their very existence is living proof that this country is rigged to serve the interests who make money with money, not the vast majority of us who rely on wages to make ends meet. It's as if they live in another dimension.