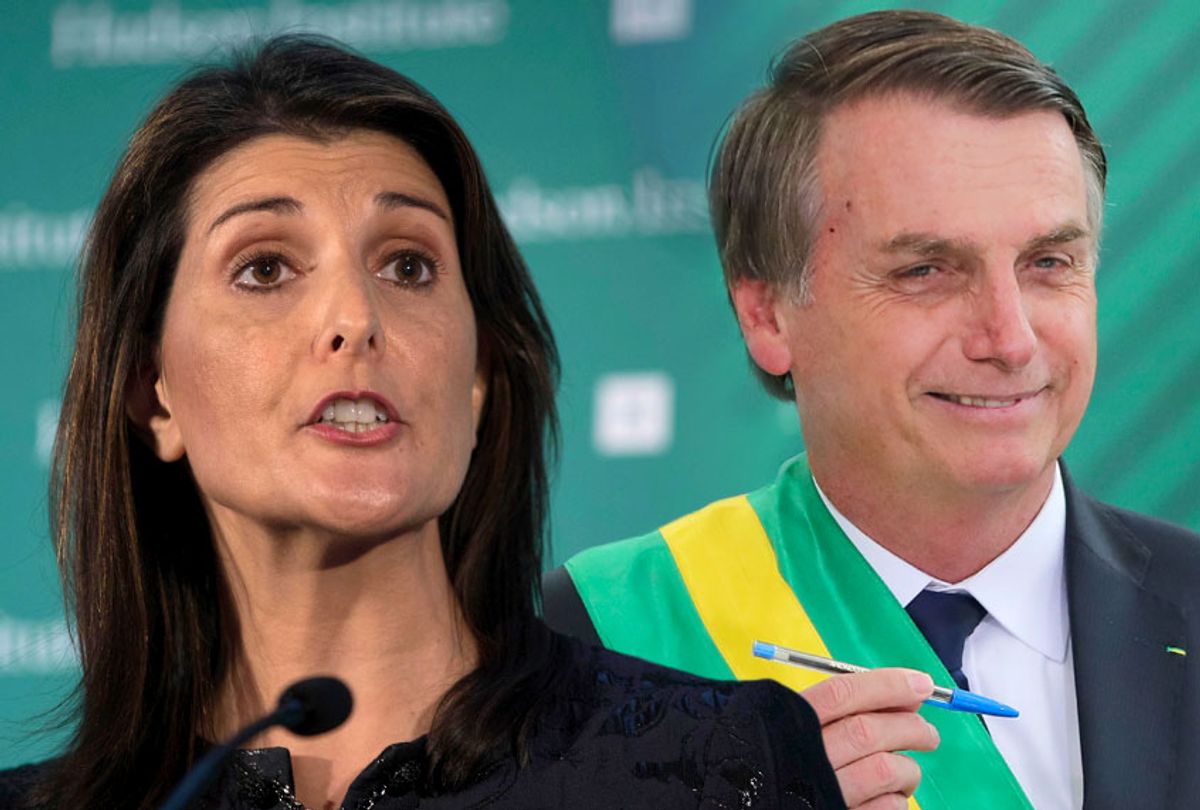 United Nations Ambassador Nikki Haley is receiving flak on Twitter for praising the election of Jair Bolsonaro, a right-wing politician who has made homophobic and racist statements, to the presidency of Brazil.

"Congratulations to Brazil’s new President Bolsonaro," Haley tweeted on Tuesday. "It’s great to have another U.S.-friendly leader in South America, who will join the fight against dictatorships in Venezuela and Cuba, and who clearly understands the danger of China’s expanding influence in the region."

Many quickly took to Twitter to express their displeasure with Haley's praise.

"Told female lawmaker she wasn't pretty enough to rape. Would rather son be dead than gay. Praised Brazil's former dictatorship, but chided them for not simply executing dissidents rather than torturing them. Brags about evading taxes. Calls immigrants 'scum.' You've got a type," tweeted Dennis Perkins of The AV Club.

Washington Post columnist Brian Klaas had a similar observation, tweeting that "Bolsonaro is transparently trying to become Brazil’s dictator. He is a far right neo-fascist. He has openly advocated for the government to murder tens of thousands of Brazilians. He also compared indigenous people to animals in a zoo, bashed gay people, and 'joked' about rape."

Gabe Ortiz from Daily Kos perhaps summed up the consensus view by tweeting, ".@NikkiHaley, @SecPompeo cheer as Bolsonaro leads Brazil into an era of racism, sexism and violent homophobia."

Bolsonaro has made a number of controversial and hateful statements. In 2011, he told Playboy Magazine that "I would be incapable of loving a homosexual son. I won’t be a hypocrite: I prefer a son to die in an accident than show up with a mustachioed guy. He’d be dead to me anyway."

Three years later, he insulted a congresswoman by saying that "she doesn’t deserve to be raped, because she’s very ugly. She’s not my type. I would never rape her. I’m not a rapist, but if I were, I wouldn’t rape her because she doesn’t deserve it." In 2017, Bolsonaro insulted residents of a quilombo (a community comprised of the descendants of escaped slaves) by saying, "They don’t do anything! I don’t think they even serve for procreation anymore." A year after that, he pretended to fire a machine gun while proclaiming that "we’re going to execute the Workers’ Party members here!"

He followed up on his offensive campaign remarks with a striking pair of executive orders targeting LGBT and indigenous people in Brazil on his first day in office, The Associated Press reported on Wednesday:

One of the orders issued late Tuesday, hours after his inauguration, likely will make it all but impossible for new lands to be identified and demarcated for indigenous communities. Areas set aside for "Quilombolas," as descendants of former slaves are known, are also affected by the decision.

Another order removed the concerns of the LGBT community from consideration by the new human rights ministry.

Praise for Bolsonaro wasn't the only controversial tweet that Haley sent out in her waning hours as America's ambassador to the United Nations.

On Tuesday she stirred up sympathy among conservatives by tweeting, "Due to State Dept rules that were changed by the outgoing administration, I have had to clear my personal Twitter account that I have had for years. The followers, the history, the pictures, and all other content. Please refollow and retweet this to your friends. Here’s to 2019!"

Later that day she also tweeted, "UNESCO is among the most corrupt and politically biased UN agencies. Today the U.S. withdrawal from this cesspool became official. #USStrong