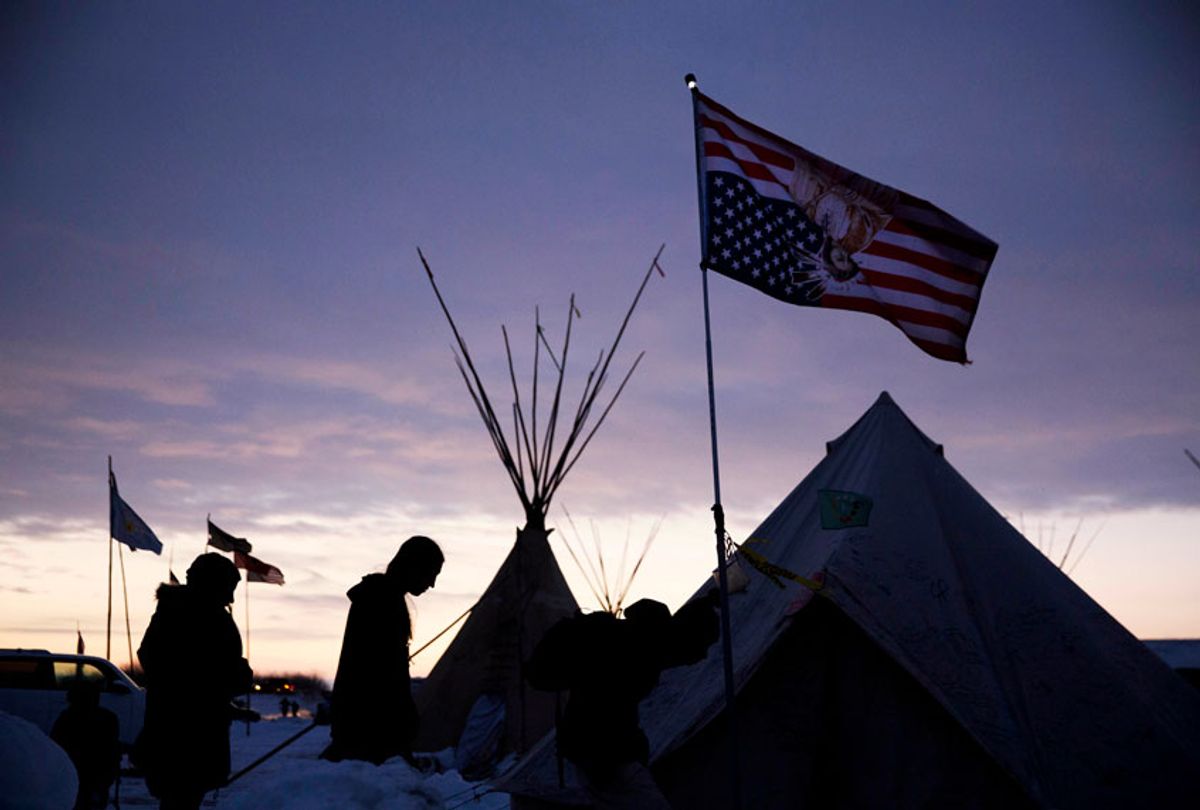 Travelers arrive at the Oceti Sakowin camp where people have gathered to protest the Dakota Access oil pipeline as they walk into a tent next to an upside-down American flag in Cannon Ball, N.D., Dec. 2, 2016. (AP/David Goldman)
--

"For one tribe of Chippewa Indians in Michigan's Upper Peninsula, the government shutdown comes with a price tag: about $100,000, every day, of federal money that does not arrive to keep health clinics staffed, food pantry shelves full, and employees paid," the Times noted. "The tribe is using its own funds to cover the shortfalls for now. But if the standoff in Washington continues much longer, that stopgap money will be depleted. Later this month, workers could be furloughed and health services could be pared back."

Because the staff of the Interior Department's Bureau of Indian Affairs has been significantly diminished due to the shutdown—which entered its 13th day on Thursday — basic services such as road maintenance, health care, and disaster relief have been cut or put at risk, the Times reported.

The shutdown has also "curtailed a Department of Agriculture food program that helped feed about 90,000 Native American people in fiscal year 2017," the Times notes.

Joseph Rupnick, chairman of the Prairie Band Potawatomi Nation in Kansas, said his tribe's food distribution center "will be depleted" if the partial government shutdown continues for much longer.

The Times report on the impact the shutdown has had on indigenous communities comes as federal workers continue to share stories of the deep financial stress they have faced since the government partially closed just before Christmas.

As media critic Adam Johnson argued on Twitter, government shutdowns should be called "shutdown of government for the poor," as partial lapses in federal funding have always disproportionately harmed vulnerable populations while leaving "right-wing" elements of government — such as the military — untouched.

With no government funding agreement in sight, Trump met with congressional leaders in the White House Situation Room on Wednesday for a "border security" briefing. Little or no progress was made as the president continued to push for $5 billion in "wall" funding, reportedly telling Senate Minority Leader Chuck Schumer he did not want to "look foolish" by backing down.

As Trump refuses to budge, an estimated 800,000 federal employees remain furloughed or continue to work without pay. As Common Dreams reported, the American Federation of Government Employees (AFGE) sued the Trump administration on Monday for requiring workers to perform dangerous jobs without pay.

"This is an example of dysfunction at its best," Heidi Burakiewicz — partner at Kalijarvi, Chuzi, Newman & Fitch, the law firm representing AFGE's members in the lawsuit — said in an interview with Democracy Now! on Wednesday. "The federal workforce has already been severely harmed by the shutdown and how long it's lasted thus far. They don't know when it's going to end, and they don't know how to budget for their own finances, because they don't know when they're going to get another paycheck."