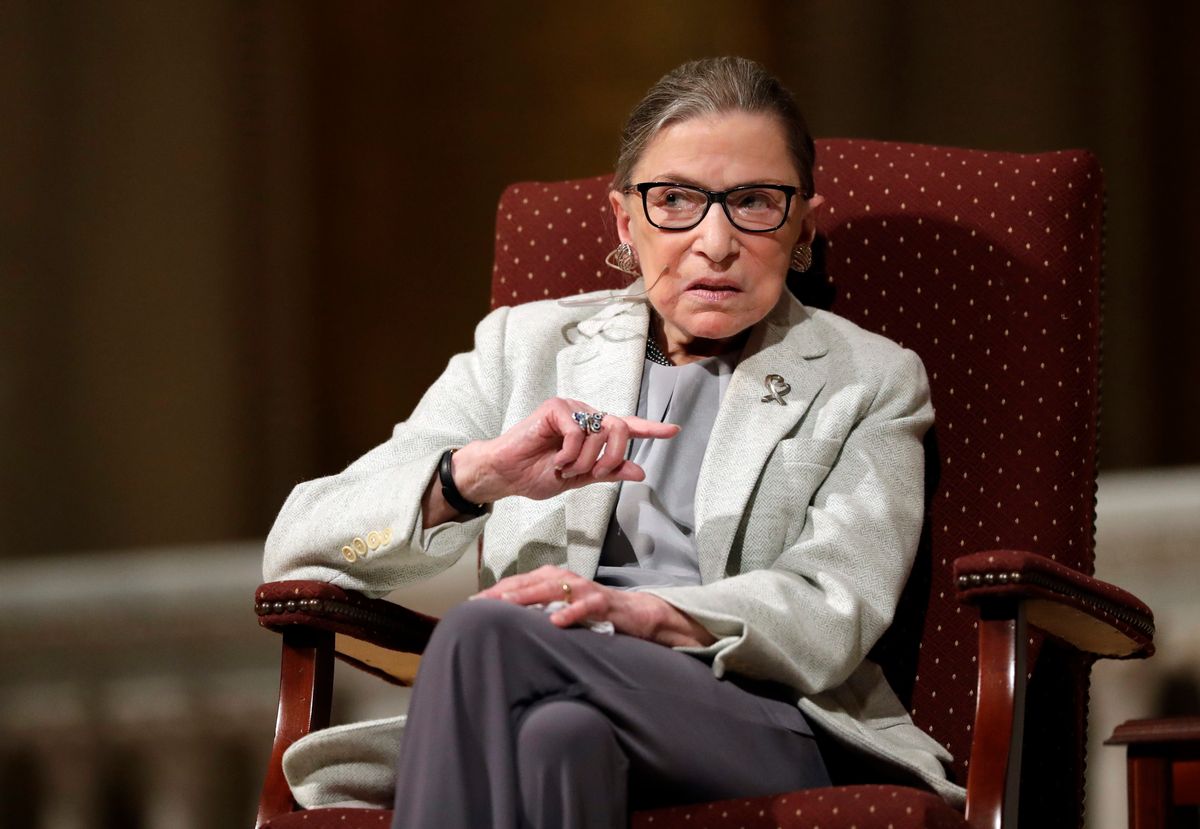 Supreme Court Justice Ruth Bader Ginsburg missed oral arguments for the first time since she was confirmed to the court in 1993 as she recovers from cancer surgery last month, the nation's highest court said. It is not clear when she will return to the bench, and cases will continue to be heard in her absence.

Kathy Arberg, a spokeswoman for the Supreme Court, said the 85-year-old liberal justice is continuing to recover and work from home after doctors removed two cancerous nodules from her left lung on Dec. 21. Ginsburg was discharged from a New York hospital on Dec. 25.

According to the Associated Press, Chief Justice John Roberts said in the courtroom Monday that Ginsburg would participate in deciding the argued cases "on the basis of the briefs and transcripts of oral arguments."

Ginsburg was hospitalized last month after a fall in her office, in which she fractured three ribs. The cancer was discovered at that time.

Ginsburg has a series of health problems in her past. She is already a two-time cancer survivor — she was diagnosed with colon cancer in 1999 and pancreatic cancer in 2009. In 2012, she fractured two ribs in a fall. In 2014, she underwent a procedure to have a stent implanted to open a blocked coronary artery.

Nominated by former President Bill Clinton in 1993, Ginsburg was only the second woman appointed to the nation's highest court. She rejected suggestions from some Democrats that she should step down in the first two years of President Barack Obama's second term, when the party also held a majority in the Senate and would likely have had little trouble nominating and confirming a successor.

At 85, Ginsburg's work on the court remains in full swing, and she has indicated she has no plans to retire anytime soon. She penned three of the highest court's 13 decisions last term and has hired clerks for the term that extends into 2020.

Ginsburg leads the court's liberal wing and is widely heralded as a trailblazer in advocating for women's rights. When he appointed her to the nation's highest court, Clinton compared her legal work to promote women's rights to the work of former Supreme Court Justice Thurgood Marshall's on behalf of African-Americans.

Ginsburg's pre-professional life was invigorated and marred by entering spaces where few women had been before. She attended Harvard Law School in 1956 in a class of nine women and about 500 men. Her position there and her credibility were constantly questioned. Ginsburg recalled the dean asking female students, "How do you justify taking a spot from a qualified man?"

The justice has since become a pop culture icon and liberal hero, known in some circles as "the Great Dissenter" for her sharp dissents on the Supreme Court and in others as "Notorious RBG," after another Brooklyn legend. Ginsburg continues to balance her soft-spoken tone with her unrelenting determination regarding her work. She also trains to stay in fighting shape, doing 20 push-ups and minute-long planks to prove her physical prowess.