"Some of them have told me that we should have done it," Trump said during a news conference at the White House 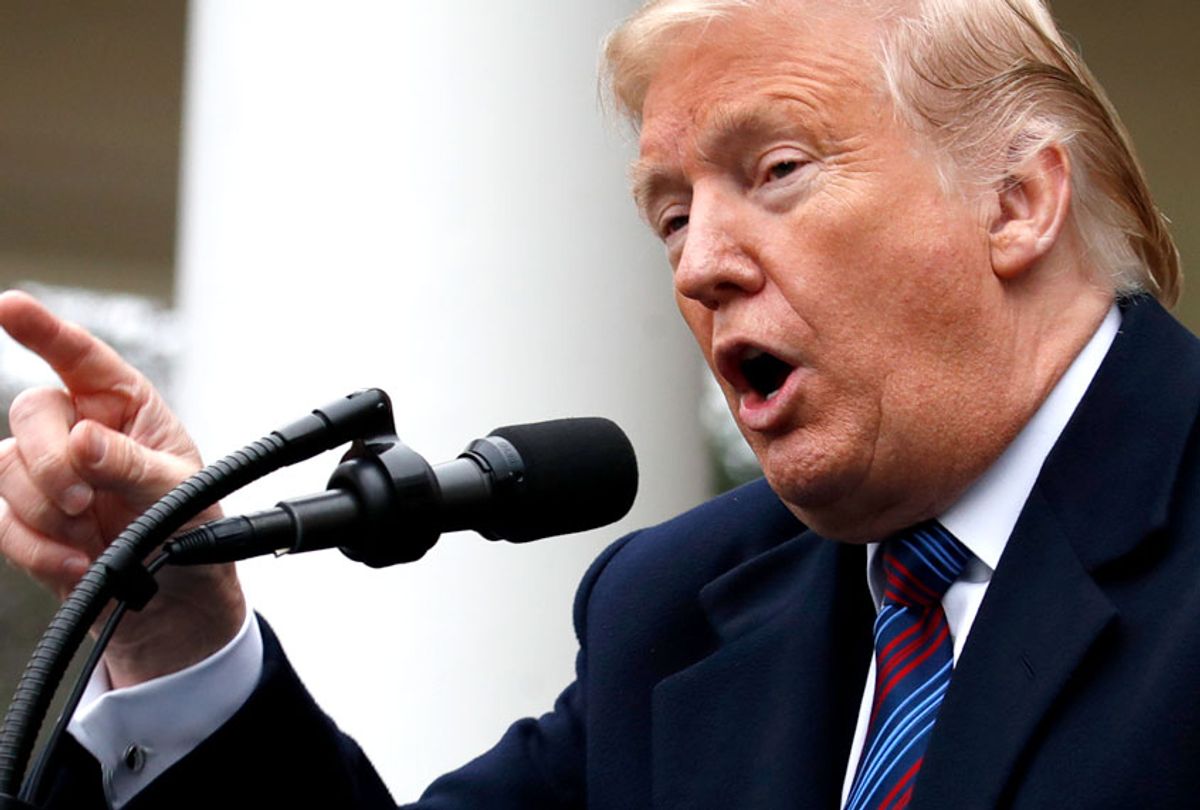 Donald Trump speaks in the Rose Garden of the White House after a meeting with Congressional leaders on border security, Friday, Jan. 4, 2019, at the White House in Washington. (AP/Jacquelyn Martin)
--

President Donald Trump falsely claimed on Friday that former American presidents had praised him for his commitment to securing $5.7 billion to construct a wall along the U.S.-Mexico border.

"This should have been done by all of the presidents that preceded me," Trump said during a news conference in the White House's Rose Garden. "And they all know it. Some of them have told me that we should have done it."

But three out of the four former White House occupants who are still alive — Bill Clinton, George W. Bush and Jimmy Carter — have denied telling Trump they wished they had erected a wall along the southern border. Barack Obama, meanwhile, has spoken critically about the idea in public.

Clinton spokesman Angel Ureña told CNN that the two-term president "never said that," adding that "they've not talked since inauguration." Freddy Ford, a spokesman for Bush, told the outlet that "they haven't discussed this."

Carter, the oldest living former commander in chief, personally said that it was not him. "I have not discussed the border wall with President Trump, and do not support him on the issue," the one-term president said Monday in a statement tweeted by the Carter Center.

While Obama, Trump's immediate predecessor, has not gone publicly on the record to deny he had praised Trump for trying to build the wall, Eric Schultz, a spokesman for the former president, pointed to past remarks in which Obama spoke critically about 45's idea to build a border wall since he began promoting the idea on the 2016 campaign trail, the Washington Post reported.

"Suggesting that we can build an endless wall along our borders and blame our challenges on immigrants — that doesn't just run counter to our history as the world's melting pot; it contradicts the evidence that our growth, and our innovation and our dynamism has always been spurred by our ability to attract strivers from every corner of the globe," Obama said in a commencement address at Rutgers University in May 2016. "That's how we became America. Why would we want to stop it now?"

Spokespeople for former president George H.W. Bush, who died in November, declined to comment, saying it was too soon for Bush to be "dragged into such debates."

On Tuesday, Vice President Mike Pence attempted to clarify Trump's comments. “I know the president has said that was his impression from previous presidents," he told NBC News' Hallie Jackson on the "Today Show."

The government has been shut down for more than two weeks over the president's demand that Congress allocate billions of dollars in funds for the wall he repeatedly promised Mexico would pay for on the 2016 campaign trail. The shutdown, which hit the three-week mark, appears to have no end in sight, as Trump and congressional Democrats continue to spar over funds to build a wall along the southern border, with Trump threatening to declare a national emergency to fund the wall if Democrats do not budge.

Trump, for his part, admitted the reason the federal government remains only partially operational is because of his ego, confessing that he would "look foolish" if he allowed the government to reopen while wall funding was being negotiated, as hundreds of thousands of federal workers continue to work without a paycheck. Trump has not spent the majority of the shutdown negotiating an end game, instead blaming Democrats for the shutdown he previously said he was proud to own.

He also alleged that the thousands of workers either furloughed or working without pay "are Democrats" — just days after he claimed that "many" of those government employees told him they were fine with not getting paid so long as Congress does not fund his long-promised wall. Both claims were offered without supporting evidence.