Many Democrats oppose the anti-BDS bill now before Congress, but Rubio went after one of the two Muslim women 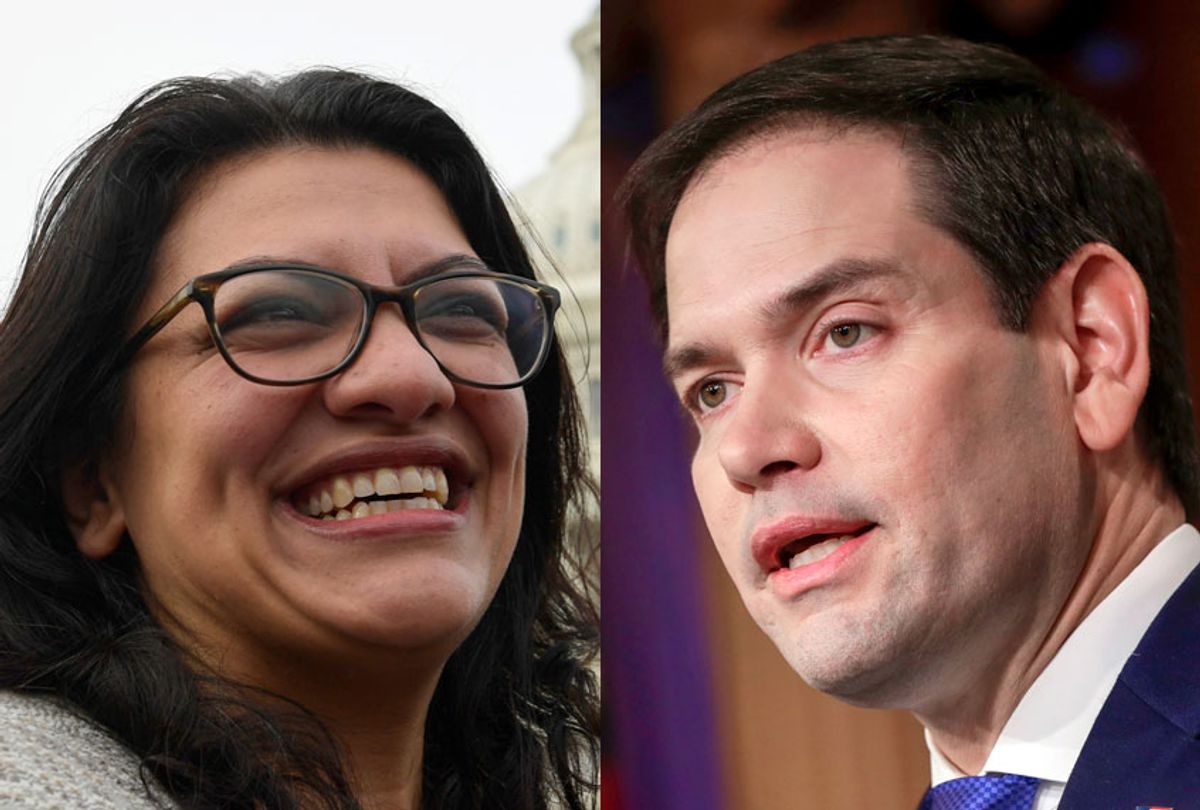 Sen. Marco Rubio, R-Fla., accused newly-elected Rep. Rashida Tlaib, D-Mich., of anti-Semitism after she and other Democrats came out against a Senate bill targeting the boycott, divestment and sanctions movement widely known as BDS. Highly controversial among liberals and progressives, the BDS movement aims at ending the Israeli occupation of Palestinian territory and ensuring full equality for Palestinian citizens.

Rubio is trying to insert the “Combating BDS Act,” which would protect the government for refusing to work with businesses or contractors who participate in the BDS movement, to a bipartisan package that includes a number of popular provisions like implementing sanctions against Syria for war crimes and support of Israel and Jordan.

The Intercept reported that 26 states already have legislation barring state contractors from supporting the BDS movement and 13 other states have similar legislation pending.

The bill appears unlikely to move forward after Democrats took a stand against passing any legislation before the government is reopened. Senate Minority Leader Chuck Schumer has announced he would oppose passing the bill and even Sen. Ben Cardin, D-Md., a staunch supporter of anti-BDS legislation, tweeted that the Senate “should not take up any bills unrelated to reopening the government.”

Sen. Bernie Sanders, I-Vt., agreed that reopening the government is the main priority but added that the bill itself is an affront to the First Amendment.

“It’s absurd that the first bill during the shutdown is legislation which punishes Americans who exercise their constitutional right to engage in political activity,” Sanders tweeted.

Tlaib shared Sanders’ comments and added, “they forgot what country they represent. This is the U.S. where boycotting is a right & part of our historical fight for freedom & equality. Maybe a refresher on our U.S. Constitution is in order, then get back to opening up our government instead of taking our rights away.”

Rubio responded by accusing the newly-elected congresswoman of anti-Semitism.

The BDS movement, modeled after the South African anti-apartheid movement, calls for the boycott of Israel to pressure it into “complying with international law” by ending its occupation of Palestinian territories and recognizes Palestinian citizens’ rights to full equality.

The Anti-Defamation League called Tlaib’s comment “problematic” because it could be “interpreted” as offensive.

Tlaib responded to Rubio by clarifying that her “they” referred to “U.S. Senators like yourself, who are seeking to strip Americans of their Constitutional right to free speech.”

Rubio amped up his attack on Democrats, accusing the party of using the shutdown as an excuse to avoid the bill.

“Democrats don’t want to move to Middle East Security Bill. A significant [number] of Senate Democrats now support [BDS] & Dem leaders want to avoid a floor vote that reveals that,” Rubio claimed, even though Cardin, Schumer, and other Democrats have backed these types of bills in the past. Tlaib and Rep. Ilhan Omar, D-Minn., are the only Democrats in either chamber of Congress to voice support for the BDS movement.

Rubio also accused Sanders of “lying” about his bill, insisting that the legislation “doesn’t punish any political activity.”

The ACLU disagreed, calling on Rubio to “reconsider” the bill, which it said “makes a mockery of the First Amendment.”

“States don't have the ‘right’ to punish individuals for participating in political boycotts the government doesn't agree with, which this bill encourages them to do,” the ACLU tweeted, adding, “whatever your views on BDS, we all should be able to agree that the government has no business telling us which causes we can or cannot support.”