A social media experiment inspires women to keep it on, even if Piers Morgan doesn't approve 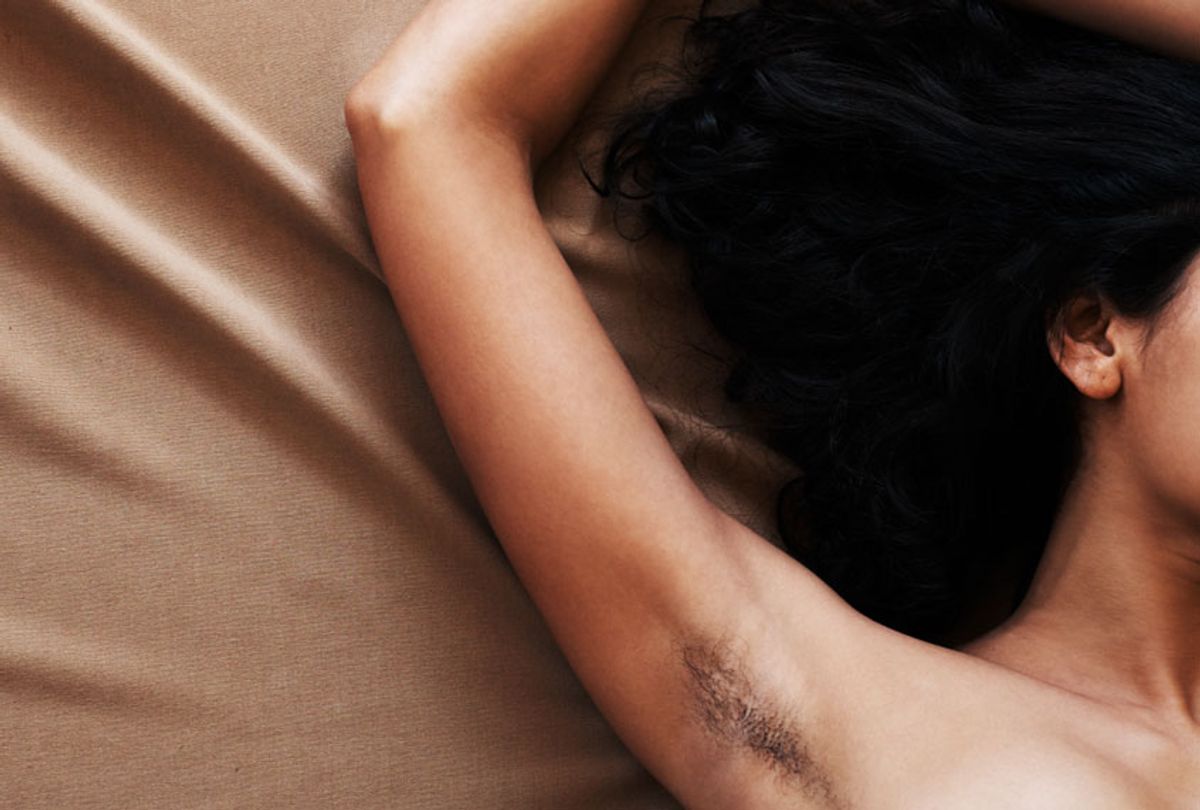 Shortly before the holidays, a friend of mine proudly texted a photo of one of the gifts she was giving her pre-adolescent daughter: her very first razor and can of shaving cream. She might want to hold off on teaching her to use them till February, though. Welcome to "Januhairy."

The new season was designated in early December, when University of Exeter drama student Laura Jackson took to Instagram to propose an "experiment for women to come together, encourage one another, and be sponsored to grow out our body hair for the month of January." And like Movember's charitable incentive, Januhairy was launched to raise awareness and funds for the UK arts and education organization Body Gossip.

Now that the first month of the year is here, Jackson's campaign has taken off. Though Body Gossip still has to meet its fundraising goal, the movement has been covered by Today, People and The Guardian, which asked, "Why is it always about women’s armpits – and not nipple hair?"

On social media, women have also been sharing their photos and stories of why they're taking a break from taking it off. "I'm satisfied with all my hair because the hairs are normal. Peace out," wrote one woman, while Instagram model Fenella Fox shared her story of going two years without shaving, and how she's called "disgusting, unattractive and dirty… on a daily basis."

True to Fox's experience, the experiment has attracted the inevitable trolls. "Ewww," wrote one gentleman on Instagram, "if thats the case, if you don't want to shave your skin, then I'll refuse to use toilet paper." Another #Januhairy image of a woman with unshaved legs prompted the comment, "That looks like half dude and half girl hahahaha."

Meanwhile, no less an expert on gender than aspiring Chief of Staff Piers Morgan declared on "Good Morning Britain" this week that "most men don't fancy women" who don't shave, adding that something inside him "did die" when he saw an image of Julia Roberts rocking an underarm afro.

And of course, it took a random man on Twitter to decree that women not shaving is "lazy and revolting." Wouldn't you just love to get a look at his grooming routine? Even Januhairy poster girl herself Laura Jackson said on Instagram recently, "My mum asked me 'Is it you just being lazy or are you trying to prove a point?'"

At a moment when (at least in the West) women are more outspoken and empowered than ever, body hair remains a battleground. You'd think it wouldn't be such a big deal — a 2017 study from market research firm Mintel found that waxing is waning among millennial women. A quarter of them now report leaving their armpits alone. And in 2018, sales of hair removal products declined almost 4 percent from the previous year. Yet the outcry of shock and horror when a woman appears in public with a follicle anywhere but her head persists. (And make sure those locks are luxuriant — the first "Bachelor" contestant with a pixie cut, Bekah Martinez, appeared in 2018.) Right now, you can find a gossip site with a gallery of "hairy celebrity slips," because why would a woman intentionally have hair? Another lists its favorite "stars with hairy legs," and yet another gleefully reports on celebrities who "forgot to shave." This is our reality. A female with even a hint of razor stubble — celebrity or not — is likely going to be subjected to a degree of scrutiny.

As a parent of teen girls, I've always tried to encourage the same low-key approach to body hair and to makeup — do what feels right for you, and what feels right can vary from day to day. Growing out your body hair doesn't make you lazy or, as multiple #Januhairy commenters suggest, vomit emoji. And shaving and waxing do not make you a dupe of the patriarchy. Other moms have a different approach to what they tell their girls. Three years ago, Khloe Kardashian recalled the "traumatizing" first time her mom took her for a facial and underarm waxing, when she was 13. "I was so terrified because she didn’t warn me!" she said. I have a neighbor who similarly trotted her daughters off for regular waxing when they started high school. She wears "Nasty Woman" T-shirts and quotes Betty Friedan, but it doesn't even seem to cross her mind that hair removal is a voluntary, and expensive, routine.

For those of us living in regions where we spend the winter bundled up under eight layers of Uniqlo's Heattech collection anyway, a Januhairy resolution will likely go unnoticed by most anyway. (Imagine the reaction if this had been proposed as "Furgust.")  But at their best, what social media campaigns like this do is spark the possibility of free will in both men's and women's minds.

As with so many things in life, it just comes down to choice. Choice, and the normalizing of a wider spectrum of body shapes, sizes, colors and degrees of hirsuteness. It's about asking questions and having conversations, about comfort and consumerism and identity. Because it's one thing to have an aesthetic preference; it's quite another to shudder that female body hair is the result of forgetfulness, laziness or flat-out grossness. Progress is possible, and trying new things can be good or the brain.  As for Laura Jackson's mother, who wondered if her daughter was being lazy, Jackson reported last week on Instagram that mom "is now going to join in with Januhairy and grow out her own body hair."