After a weekend of explosive revelations, how much more is Trump hiding?

A president under FBI investigation, who has concealed evidence of his meetings with Putin. What's coming next? 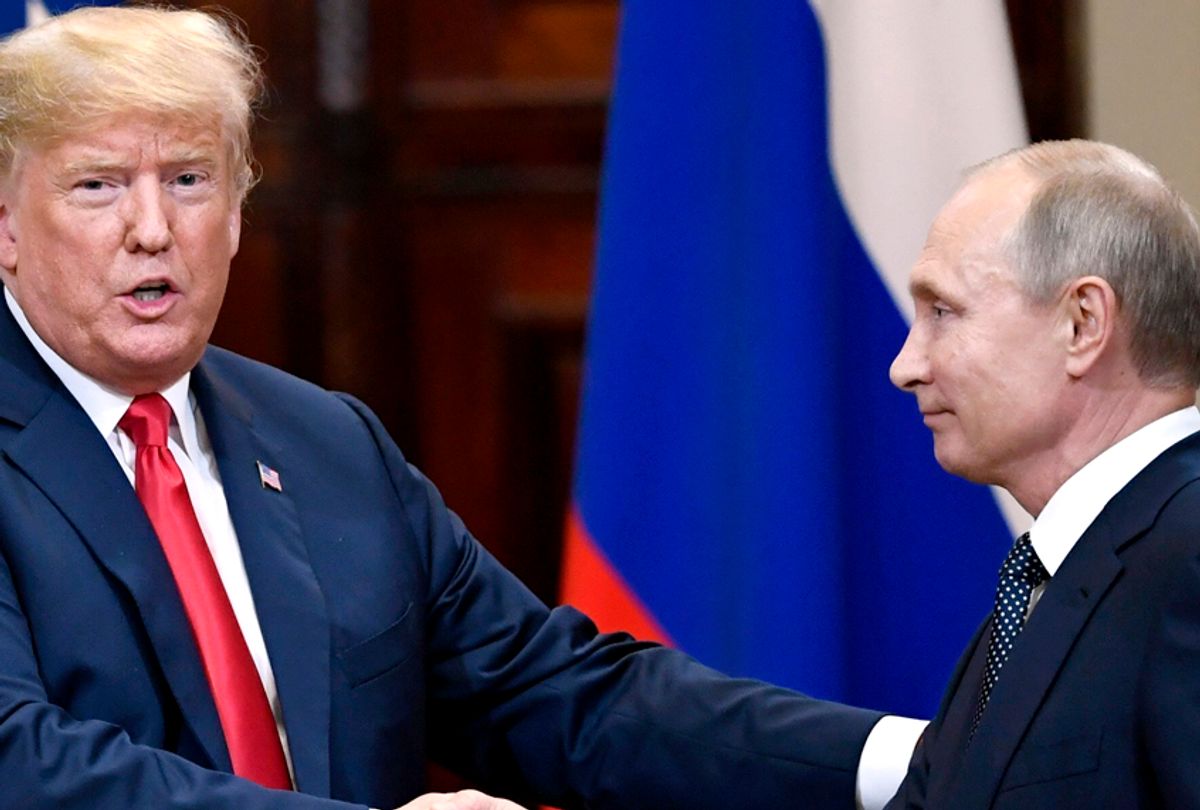 The lede in Peter Baker's story in the Sunday New York Times was one I don't think anyone ever expected to see:

So it has come to this: The president of the United States was asked over the weekend whether he is a Russian agent. And he refused to answer.

That comment specifically refers to a question posed to the president by Fox News' Jeanine Pirro in reference to the big Times story on Friday reporting that in the wake of the firing of James Comey in May 2017, and Trump's suspicious behavior surrounding that event, the FBI opened a counterintelligence investigation into the president himself. We don't know whether that probe is still active, but one can safely assume that it was folded into special counsel Robert Mueller's portfolio along with a number of other investigations that had been opened into Russian spying, sabotage and cyber-propaganda over the course of the presidential campaign.

Salon's Andrew O'Hehir took a deep dive into the details and political implications on Saturday, particularly noting the fact that while many of us have concluded that there was plenty of evidence Trump was compromised and this was just the last straw, the right just sees this as more evidence of a "Deep State coup." Any hopes that there will soon be a bipartisan consensus on this is as remote as ever.

But that wasn't the only Russia story that hit this weekend. The Washington Post reported that Trump's infamous private meetings with Russian President Vladimir Putin over the past two years are even more suspicious that we were led to believe. This seems to have especially alarmed some of the people who know about such things:

The Atlantic's Natasha Bertrand pointed out that Laufman is the former chief of the Counterintelligence and Export Control Section of the National Security Division at the Department of Justice. He oversaw parts of the Russia investigation before leaving DOJ last year.

We knew, of course, that Trump had gone to some lengths to speak privately with Putin, but the new reporting shows that he's gone to greater lengths than we knew to hide the details, going so far as  confiscating the notes from at least one of his interpreters at the 2017 G20 summit and giving instructions not to discuss the meeting with members of his administration. (Former Secretary of State Rex Tillerson did attend that meeting .) You'll recall that Trump was also later revealed to have had a long private conversation with Putin at the official G20 banquet.

As Marcy Wheeler and others have pointed out, Trump later admitted that they discussed "adoptions" at this little tête-à-tête, which just happened to take place the night before Trump dictated that dishonest response to the New York Times on Air Force One. You remember: The one claiming that the the notorious Trump Tower meeting with Donald Jr., Jared Kushner and all those Russians was an innocent discussion about ... adoptions.

The Post revealed something else about that Hamburg meeting that was quite startling. The American interpreter who was in the room refused to discuss the details of the meeting with officials from the National Security Council but did report that Trump responded “I believe you” after Putin denied any Russian involvement in the U.S. election.

It must have been quite a chat. Our president tweeted this on the way home:

Experts all dismissed that as a daft notion, but Trump brought it up again at the notorious Helsinki meeting last summer. This time he refused to have anyone but the interpreters present for the two hours he spent with Putin before appearing in what may be the most horrifying press conference of his tenure -- and that's really saying something.

When Trump was standing beside the Russian president, he was asked about the election and whether he would denounce Russian interference. This is what he said:

With that being said, all I can do is ask the question. My people came to me, Dan Coats came to me and some others, they said they think it's Russia. I have President Putin; he just said it's not Russia.

I will say this: I don't see any reason why it would be. But I really do want to see the server.

But I have -- I have confidence in both parties. I -- I really believe that this will probably go on for a while, but I don't think it can go on without finding out what happened to the server. What happened to the servers of the Pakistani gentleman that worked on the DNC? Where are those servers? They're missing; where are they? What happened to Hillary Clinton's emails? 33,000 emails gone -- just gone. I think in Russia they wouldn't be gone so easily. I think it's a disgrace that we can't get Hillary Clinton's 33,000 emails.

So I have great confidence in my intelligence people, but I will tell you that President Putin was extremely strong and powerful in his denial today.

Needless to say, beneath that river of incoherent drivel, Trump managed to make it quite clear to the whole world, as Putin looked on, that he would not or could not say one word of condemnation for Russia's behavior.

The Post reported that officials “said they were never able to get a reliable readout of the president’s two-hour meeting in Helsinki.” Experts in these matters explain that the fact there was no American record of what was said in the meeting meant that Putin could say Trump agreed to anything he wanted, and there would be nothing Trump could do about it. But that's a silly thing to worry about. After the press conference, it was obvious that Trump was happy to appear before the whole world and agree to anything Putin proposed.

The Democrats say they will call the interpreter to testify before the House Intelligence Committee, which could potentially answer the more serious concern. Is Putin exercising leverage over Trump in these private meetings or is Trump just a guy standing in front of a strongman, asking him to love him?