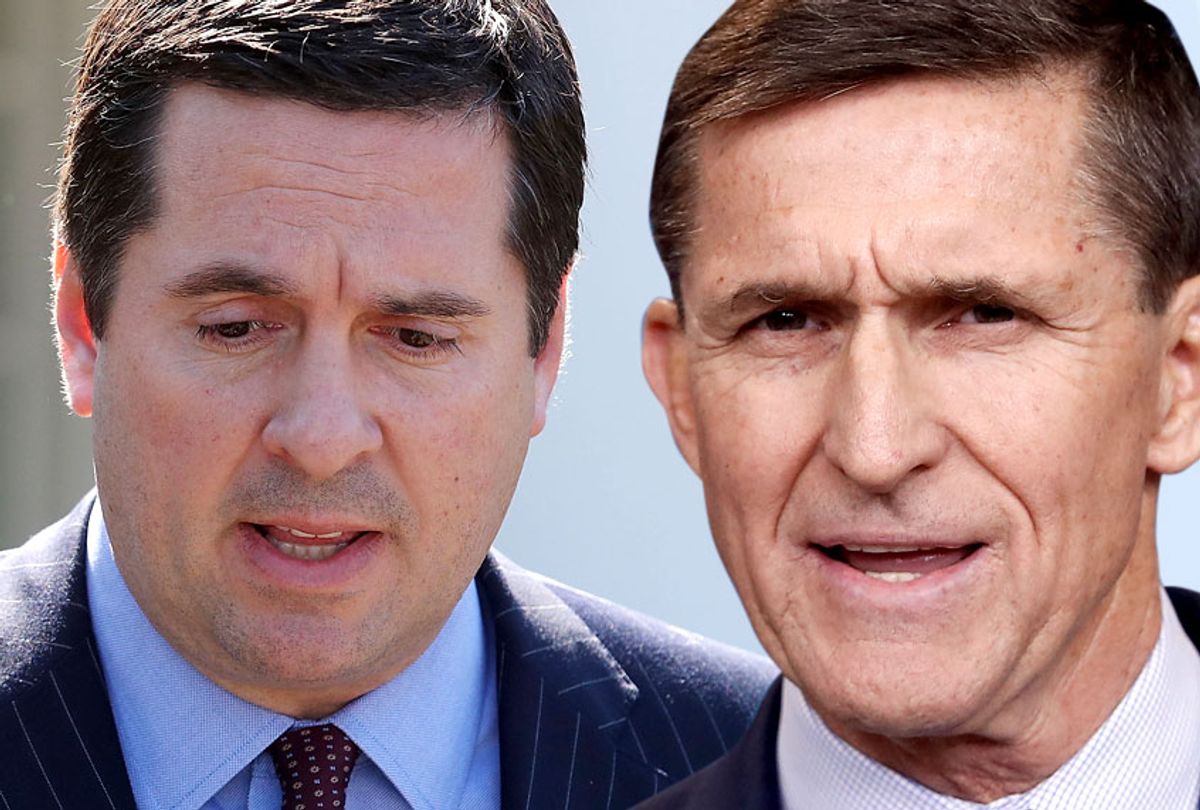 Special counsel Robert Mueller and federal prosecutors in New York are investigating a January 2017 event attended by Rep. Devin Nunes, R-Calif., Michael Flynn, and dozens of foreign officials as part of a probe into whether foreign money flowed into President Trump's inauguration fund.

Nunes, then the chairman of the House Intelligence Committee, and Flynn, who would become the president’s national security adviser (if for only a short time), attended an event with about 60 foreign officials at the Trump International Hotel in Washington two days before Trump’s inauguration, the Turkish newspaper The Daily Sabah reported in 2017.

That event is now being looked at by federal prosecutors in Manhattan as part of their investigation into whether the Trump inaugural committee misused funds for the inauguration and whether donors to the committee were trying to curry political favor from the incoming administration, The Daily Beast reported. The probe into the inaugural committee was reported by The Wall Street Journal in December. The New York Times reported Monday that Trump’s inaugural committee spent $107 million in 72 days, roughly twice the amount spent by similar committees for Barack Obama and George W. Bush.

The event has also come under scrutiny by Mueller’s team, which is investigating whether foreign officials illegally contributed funds to Trump’s inaugural committee and political action committee through intermediaries, The Daily Beast reported.

The meeting was attended by officials from, among others, Saudi Arabia, the United Arab Emirates and Israel, who all reportedly offered to aid the Trump campaign in 2016 through intermediaries, The Daily Beast reported in November 2018.

“If you’re a prosecutor, all of the right players are there,” former federal prosecutor Paul Pelletier told the outlet. “In a lot of ways breakfasts like this are totally normal. It happens all the time in Washington. So, they wouldn’t be investigating it if they weren’t following the money. The big question would be who is paying for it? It’s got to be part of the broader scheme of who is trying to use money to influence the White House.”

Mueller asked Flynn about his interactions with foreign officials leading up to the inauguration, according to the report. Flynn, who was ousted as Trump’s national security adviser just weeks after the inauguration, pleaded guilty in the Mueller probe to lying to the FBI about his contacts with then-Russian ambassador Sergey Kislyak.

Nunes, for his part, derailed the House Intelligence Committee’s investigation into connections between Trump’s team and Russia. The committee ended its investigation last year and released a report claiming the panel “found no evidence of collusion between President Donald Trump’s associates and the Kremlin.” Nunes instead sought to shift the focus to investigating the FBI’s investigation of Trump.

One of Nunes’ top aides, former Defense Intelligence Agency analyst Derek Harvey, was appointed to the National Security Council during Flynn’s brief tenure at the White House. Another former aide to Nunes’ committee, Michael Ellis, was hired by the White House counsel’s office. Ellis and Flynn aide Ezra Cohen-Watnick then fed Nunes information, which he then claimed came from whistleblowers concerned over the “unmasking” of names like Flynn’s from surveillance intercepts.

Since Flynn’s firing, it was reported that he spent his time as national security adviser promoting a Russian deal to build nuclear plants across the Middle East and previously plotted to kidnap a Turkish dissident living in the United States at the behest of the Turkish government.

Obama, who fired Flynn from his former post as the head of the Defense Intelligence Agency, warned Trump against hiring Flynn to his administration, NBC News reported. The Daily Beast reported that transition officials questioned whether Flynn would be “too risky” a pick given his “cowboy” and “wild man” reputation.

“Will he be a problem, do you think?” one of the officials asked Trump.