What a surprise: Business has reaped huge profits under the tax law, but not nearly as much growth as expected 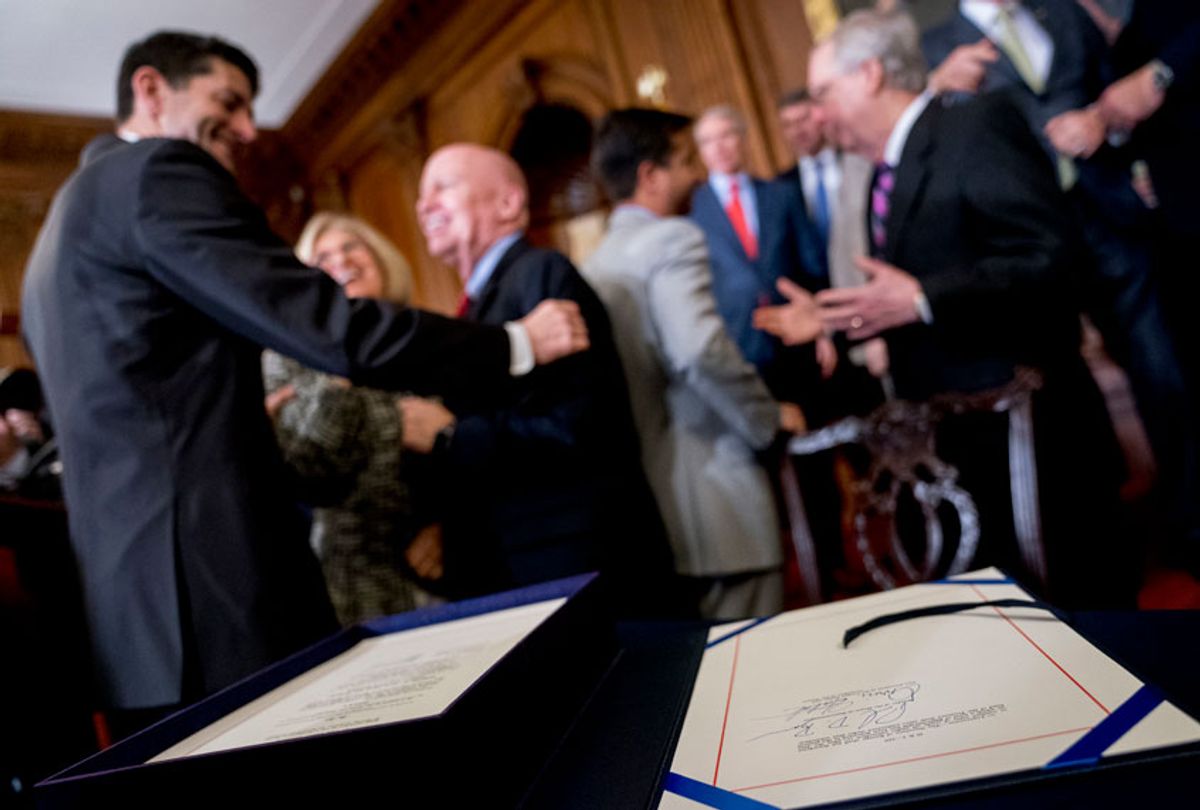 The signatures of Paul Ryan and Orrin Hatch can be seen as Ryan and Kevin Brady congratulate each other after signing the final version of the GOP tax bill during an enrollment ceremony at the Capitol in Washington, Dec. 21, 2017. (AP/Andrew Harnik)
--

Corporate tax cuts passed by the Republican Congress in 2017 will cost $600 billion more than originally projected, according to an analysis by Bloomberg.

The new tax law slashed the corporate tax rate to 21 percent from its previous top rate of 35 percent. At the time, the Joint Committee on Taxation projected the cut would cost the United States $1.4 trillion in revenue over the next 10 years -- although unlike the individual income tax cuts in the law, the corporate tax cuts do not expire.

According to Bloomberg’s Stephen Gandel, however, the tax cuts have saved the companies in the S&P 500 at least $600 billion more in taxes than expected, which is also how much more the cuts will add to the national debt over the next decade. The total corporate savings under the tax law -- just by the companies in the S&P 500 -- will reach close to $2 trillion, according to the analysis.

Not only is the tax cut larger than even Republicans expected, it has also not resulted in the gains that were predicted by proponents of the bill.

Companies in the S&P 500 saw profits rise 24 percent in the first year of the tax law, the biggest increase in nearly a decade, but half of that growth came from lower tax bills. Bloomberg reports that analysts predicted the lower taxes would only amount to a third of the projected growth.

According to the report, companies in the S&P 500 paid an average effective corporate tax rate of 19 percent in the first three quarters of 2018, compared to 28 percent in 2017. In total, the companies saved $395 million in taxes every single day of last year.

As expected, the tax law has been good news for the largest corporations in the U.S., which saw share prices increase even more than projected before the law was passed. But the law hasn’t helped companies increase earnings. Gandel notes that when the effect from lower tax bills is excluded, the S&P 500 actually earned less last year than they were projected to before President Trump was elected.

Gandel points out that the shortfalls may not be the result of the law itself. If the tax cuts were working as they should, he wrote, the S&P 500 companies would be worth $2.2 trillion more than they are today. Instead, he writes, the “Trump Slump is erasing the bump the stock market received from the tax cuts.”

The “evidence is mounting that the promised economic boost isn’t materializing," Gandel wrote. "The administration’s signature political achievement is being eclipsed by disarray over trade, immigration and a government shutdown.” Gandel added that at least some of the shortfall can be blamed on the “Trump Discount — the amount Trump’s actions, from his trade war with China to his more recent eagerness to shut down the government have hurt the value of the market and the investment accounts of many Americans. The tax cuts provided a short-term boost, but given how large the Trump Discount has swelled, it is harder and harder for investors to notice.”