In the sixth season, the NBC comedy embarks upon a subplot that critiques stop and frisk and the super-cop myths 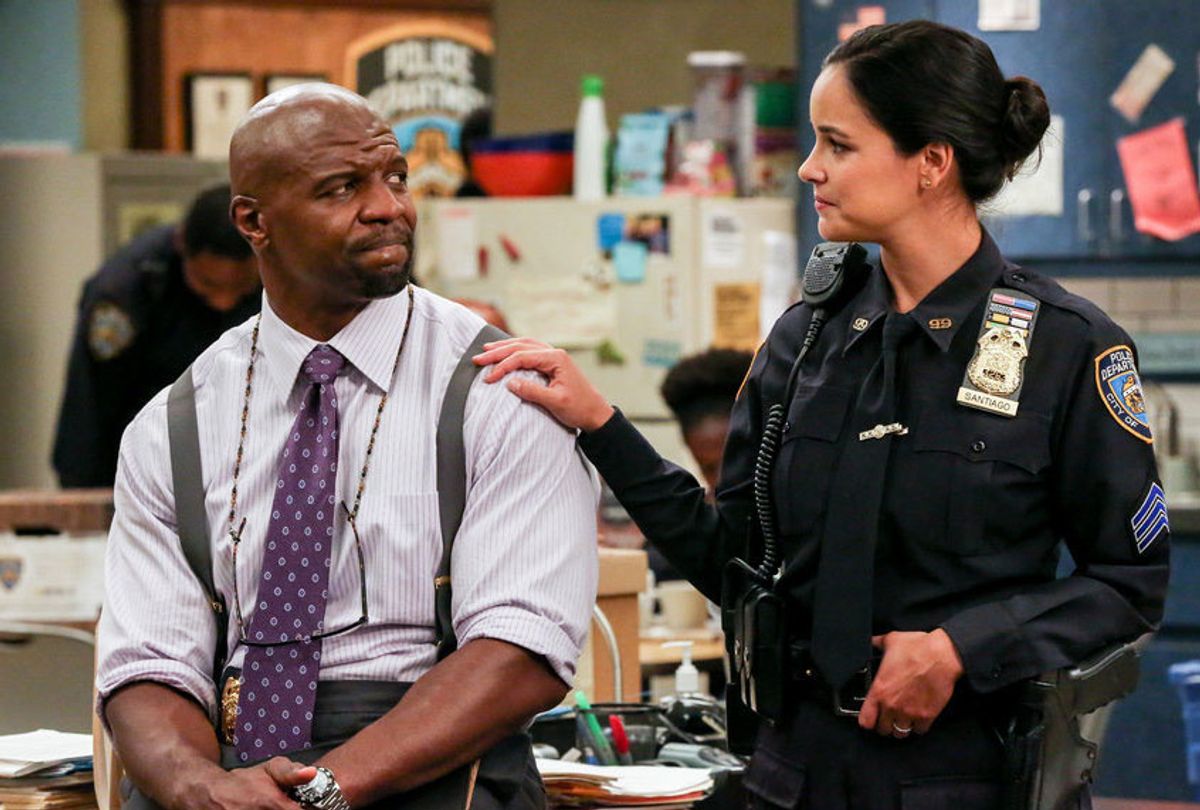 On "Brooklyn Nine-Nine" Jake Peralta (Andy Samberg) has an unreasonable level of affection — nay, hot sexual attraction — for the "Die Hard" franchise. His ideal self is John McClane's doppelganger, more action man than by-the-book cop, never forgetting that even if he breaks the rules, he does so in the service of good, tossing off pithy one-liners as he goes.

In the world co-created by Michael Schur and Daniel Goor, Jake has a comedian's face and weird obsession with fourth grader humor. He also wishes his boss, Captain Raymond Holt (Andre Braugher), were his dad, and is newly married to his former co-worker and now superior Amy Santiago (Melissa Fumero) who dresses up like McClane's estranged wife Holly Gennaro as part of their honeymoon sex fantasy.

These are not the traits of the super cop long defined for us by Hollywood. (I can't picture Bruce Willis dressing up like Melvil Dewey, inventor of the Dewey Decimal System, to tempt any of his lovers, as Jake does for Amy.) But Jake and the rest of the 99th Precinct represent something better: an idealized version of police, and policing, that's also attainable.

"Brooklyn Nine-Nine," now in its sixth season and currently airing Thursdays at 9 on NBC, is largely defined by the affection it has engendered among fans, an outgrowth of the sweet warmth surrounding the show's work family. Schur, who also created "The Good Place," specializes in building families of choice or vocation (perfected on "Parks and Recreation," where he worked with Goor).

In bringing disparate personalities together by happenstance or career, he finds ways to bond them through loyalty and, eventually, deep sense of caring for one another.

The cops of the 99th also care for the people on their beat, a feeling that's been established subtly but solidly throughout the show's six-season run. This is legitimately heartening in an era when the relationship between cops and the communities they police are often portrayed as strained.

In a subplot introduced in the season premiere, Holt takes a bat to the status quo of the New York Police Department, pushing back against a department that would rather promote mediocre white guys than affect change by, in a move reminiscent of so-called "resistance" tactics, not giving a hoot. He circumvents the powers-that-be that are in his way, and takes his concerns about extreme law enforcement tactics to the mayor.

For the time being, this bravery is rewarded by halving the department's available office space, as the current commissioner enacts a very modern solution, taking out his anger on Holt and everyone beneath him.

Throughout its run, "Brooklyn Nine-Nine" has parodied pop culture's mythmaking of morally-grounded American law enforcement, as perpetuated by the likes of Dick Wolf's "Law & Order" franchise and other long-running series like "NCIS" and "CSI," by incorporating themes related to social justice. Cases change each week but societal obstacles remain present. Often these matters emerge within the personal stories of the Nine-Nine's figures, a particularly heart-gripping one being Rosa's coming-out story last year.

The Nine-Nine, which also includes Sergeant Terry Jeffords (Terry Crews), Detectives Rosa Diaz (Stephanie Beatriz), Charles Boyle (Joe Lo Truglio) and resident lumps Scully (Joel McKinnon Miller) and Hitchcock (Dirk Blocker), is an effective group of cops because they see each other like family. (The outlier, somewhat, is Chelsea Peretti's prankster Gina Linetti, who only provides help when absolutely necessary but otherwise needles each person for her own entertainment.)

Like a genuinely loving brood, they're committed to being the absolute best officers that they can be, and under the watch of the fastidious Raymond Holt, that means doing everything the right way — fairly, correctly, by-the-book.

A largely unspoken (but not unnoticed by longtime viewers) aspect of this do-right attitude is that a group anchored by members of marginalized communities, including  two African-American leaders, one of them a gay man; and two Latinx officers, one of them openly bisexual, has to keep its nose clean and deliver nothing short of excellence if they want to be taken seriously.

Jake is the only one who can play the part of the super cop, but within limits. After all, what he does reflects upon Holt, a truth driven home when, for several episodes, the pair went into witness protection together. Until this season, Holt was in the running to become the first openly gay black commissioner of the NYPD.

In fact, the only two allowed to be sloppy are Hitchcock and Scully, although their crimes consist mainly of behaving like dullards.

Hitchcock and Scully are the focus of this week's episode, one of those half-hours that rewards a series' fans by letting them in on a secret about characters we've been conditioned to write off.

But I'd also posit that the "Brooklyn Nine-Nine" writers designed this particular detour with more than mere pandering in mind.

Anyway, in the resolution of season 5's cliffhanger, the sixth season premiere reveals that Holt didn't get the police commissioner job. Instead the post goes to his rival John Kelly, who, encouraged by politicians touting "law and order" policies, immediately announces a vigilant policing initiative, the cornerstone of which promotes the controversial practice of stop-and-frisk.

Sometimes, as viewers witnessed in Holt's political campaign and his other career moves, the writers pointedly comment on structural racism, sexism and other forms of discrimination that exist within the department's structure. "Brooklyn Nine-Nine" is never preachy with these points; the series is a comedy first and foremost so even the most outrageous examples of intra-departmental discrimination are presented in ludicrous packaging, as if to remind us that such banal evils are nonsensical.

But they're serious ills nevertheless, which is why it's heartening to see Schur, Goor and the writers make this season's arc about the danger of placing a political extremist at the top of the New York Police Department's political structure.

Holt's spiraling depression is played for maximum laughs in the season premiere. Whenever the professorial, strapped-down Holt spins out, it's a rare treat: he maintains his flat, expressionless demeanor while displaying he has no more hoots to give through uncharacteristic behaviors such as sporting a t-shirt with a picture of a pineapple wearing a thong with the word "SLUT" beneath it.

The cause, however, is serious in two respects. In failing to win the commissioner post, Holt realizes that despite a career spent rising above the homophobia and racism he's experienced on the job, proving his excellence and worthiness for promotion will only take him so far. But worse, in his view, is the danger Kelly's rule poses to the citizens of New York and, in turn, the reputation of a police force striving to maintain the public's trust in the face of negative publicity.

As Holt points out, under his watch crime in Brooklyn has decreased, and even community relations have improved to the point that "everyone loves the police. It's embarrassing!"

For any network comedy to be exploring this is refreshing, let alone a comedy powered by phrasing, sight gags and general buffoonery. Which brings us back to Hitchcock and Scully, two old white guys whose days of chasing perps are long behind them and are content to ride their desks until their pensions kick in.

Without giving any of the newest episode's best surprises away, their story deflates the super-cop image epitomized by "Die Hard" and other movies and TV shows about the rule-breaking, gravity-defying detectives Jake Peralta wishes he could be.

Frequently the most unlikely of characters have a few surprises up their sleeves — a signature of Schur's sprinkled throughout "Brooklyn Nine-Nine" and his other works, and indeed, a feature of any good detective story, not to mention the main tools in John McClane's arsenal.

Members of law enforcement aren't any more bullet proof than the citizens and suspects they police, and are just as subject to scrutiny and corruption as any larger-than-life villain. But watching Raymond Holt and the rest of the Nine-Nine share the same struggles as the rest of us maintains our faith in "Brooklyn Nine-Nine" and its vision of what fairness and justice can and should look like.