"Glass" is a great M. Night Shyamalan movie — and a fitting end to the Eastrail 177 trilogy 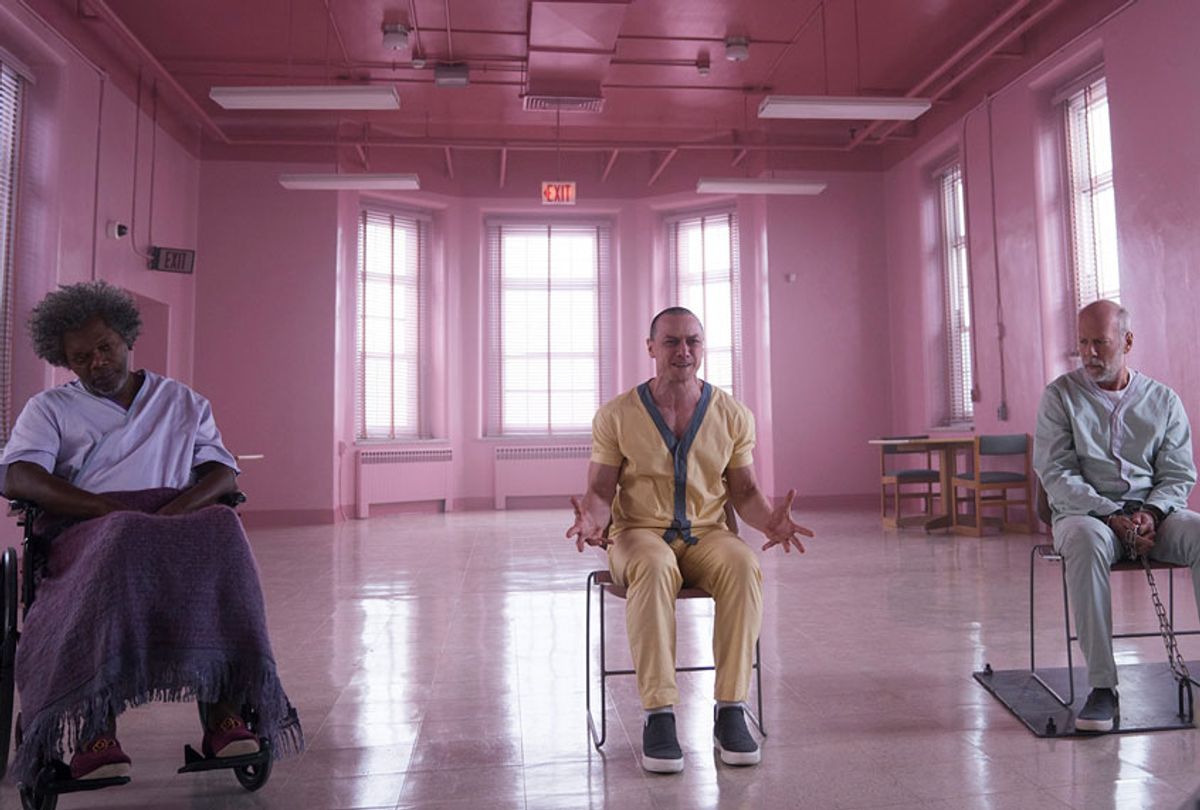 There is no more subtle way of putting it: I loved "Glass" far more than I expected.

There are two levels on which "Glass" works, both of which illustrate why it is a successful movie on its own terms and an ideal closing chapter to M. Night Shyamalan's Eastrail 177 trilogy (a series that also includes "Unbreakable" from 2000 and "Split" from 2017). The first level is that of an entertaining popcorn flick. Fortunately for Shyamalan, who began his trilogy around the same time as the start of the modern superhero movie boom, comic book flicks are still in vogue, and "Glass" delivers what both a comic book movie fan and a Shyamalan fan would want. There are thrilling, well-choreographed action scenes that bookend the plot, awe-inspiring superpowers rendered lifelike for audience members due to realistic special effects, likable main characters at the heart of the story and more clever plot twists than you can shake a stick at. For all of those reasons, I can recommend "Glass" for casual moviegoers, with the minor caveat that it will probably be appreciated more by those who have seen the first two movies in the series (though I doubt anyone will struggle to follow the story).

"Glass" picks up where "Split" left off, with a super-villain known as The Horde (James McAvoy) who is on the loose and murdering innocent people. The gimmick with The Horde, whose real name is Kevin Wendell Crumb, is that his dissociative identity disorder actually allows each of his two dozen personalities to physically change his body when they take over his mind. Because one of those personalities is a cannibalistic superhuman known as The Beast — an entity with super-strength, super-speed, unusually strong skin and the ability to climb on walls and ceilings — Crumb is the antagonist, although it is suggested that not all of the personalities summoned by McAvoy's Crumb are willfully malevolent.

Crumb's superhero counterpart is David Dunn (Bruce Willis), who is invulnerable to illness and injury, possesses super-strength and super-stamina and can learn about people's crimes by touching them and using extrasensory perception. When we were first introduced to Dunn in "Unbreakable," he had just learned about his powers after surviving the derailment of the Eastrail 177 train; now we discover that Dunn has spent the 19 years since that movie's events anonymously fighting Philadelphia's criminals as a hooded vigilante known as The Overseer, with his son Joseph (Spencer Treat Clark) helping him behind the scenes. When The Overseer inevitably finds and fights The Horde in order to rescue The Beast's most recent victims, the super-brawl winds up taking an unexpected turn, forcing both characters to question their own status as super-beings as they confront the seemingly skeptical Dr. Ellie Staple (Sarah Paulson).

It is here that I must turn to the movie's titular character, Mr. Glass/Elijah Price (Samuel L. Jackson), whose story arc not only makes this movie great, but by extension enhances the first two movies in the trilogy as well. As the first movie revealed in its twist ending, Price is actually a mass murderer who views himself as a supervillain because of his unusually high intelligence, one that he has primarily devoted to studying comic books and attempting to flush out one of the super-beings he is certain exists in real-life. While that certainty is born in part from his own intellectual deductions, he has a deep emotional need for that belief as well: Price was born with Type I osteogenesis imperfecta, a disease that causes his bones to break very easily (hence the moniker Mr. Glass), and he desperately believes that his agonizing existence can be justified if he proves that there are people as physically strong as he is vulnerable. This puts him at odds with Dr. Staple, whose mission is to convince Dunn and Crumb (and by extension Price) that super-beings are a fantasy. Then again, Dr. Staple might also be on a mission of her own.

Price's enterprise provides "Glass," and through it the two preceding films, with both its heart and deeper unifying idea. Taken together, the Eastrail 177 trilogy is the story of a man who goes to extreme lengths to find meaning to a life he fears may be nothing more than a cruel joke at his own expense. It is a testament to Jackson's talent as an actor that we empathize with him, even though he does terrible things. At the same time, it speaks to Shyamalan's skills as a writer —  which have not always served him as well — that Price's belief serves as an apt prism for our own culture's obsession with superheroes. When Price discusses why people need to believe that these heroes are real, how it can give them a sense of hope in a world too often filled with sadness and pain, he sounds like a darker version of the inspiring idealist that Jackson more famously plays in the Marvel Cinematic Universe, Colonel Nick Fury (Shyamalan playfully alludes to this parallel with a blink-and-you'll-miss-it pun based on the Marvel brand). His character makes "Glass" almost into a parable, although its narrative is too convoluted for that term to fit perfectly.

Just to be clear: I'm not saying that "Glass" makes Price into a hero. It's smarter than that. The point is that the emotions which drove Price to prove that people like Dunn and Crumb really exist are more powerful than the blander, safer and ultimately more discouraging reality preferred by other characters in the trilogy. Looking back on all three films, it is clear that Shyamalan had this theme in mind as he developed each of their stories. "Glass" is an attempt to bring that grand narrative to a fitting close, and Shyamalan does so in a way that is dramatically satisfying both for fans of this specific movie and the entire series.

I would be remiss at this point if I didn't add that, while I regard "Unbreakable" as an underrated classic, I did not hold "Split" in similarly high regard. Although it had a number of redeeming qualities, from McAvoy's tour de force acting to Shyamalan's tense pacing, the depiction of mental illness struck me as exploitative and problematic, especially since Shyamalan often uses psychological atypicality as a way to signify potential violence in his movie characters (see "The Sixth Sense," "The Village" and "The Visit"). While those elements are still present in "Glass," they are downplayed when the story focuses on Crumb, and the movie wisely focuses instead in his relationship with the one character The Beast chose to spare at the end of "Split," Casey Cooke (Anya Taylor-Joy). This doesn't redeem the unfortunate stereotyping, but it at least allows it to somewhat fade into the background. One could argue that Jackson's disabled character is also an unflattering stereotype of disability, although because he is the most complex character in the series and his disability isn't portrayed as frightening, I'm not sure I'd share that view.

Either way, these are minor quibbles for a movie that ranks among Shyamalan's best. While the director is most famous for directing one very good movie (his 1999 classic "The Sixth Sense") and a number of awful movies ("The Village" in 2004, "Lady in the Water" in 2006, "The Happening" in 2008, "The Last Airbender" in 2010 and "After Earth" in 2013), I suspect The Eastrail 177 trilogy will age better than his lesser works. While I know many of my fellow critics disliked "Glass," I hope that Shyamalan will use this as a template for his future movies.