"The Dark Knight" received the recognition it earned. But "Black Panther" is a superior film all around 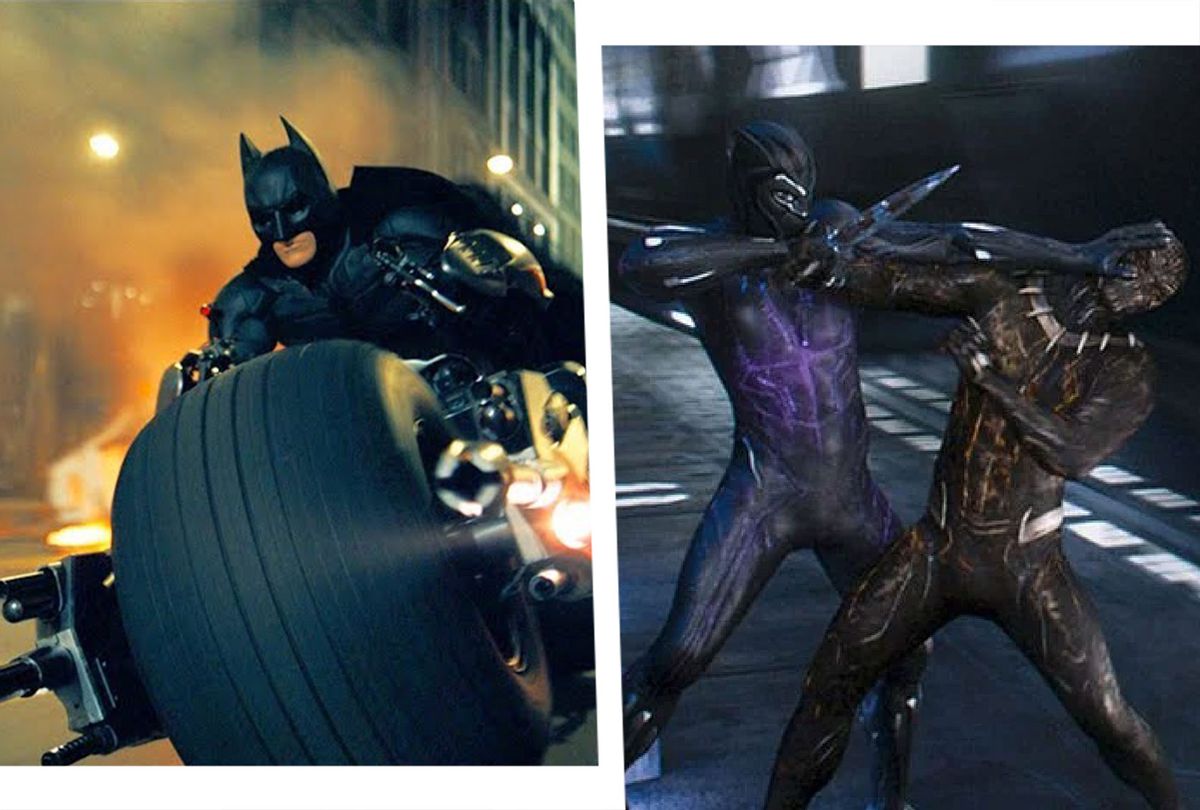 With "Black Panther" making history as the first superhero film to receive an Oscar nomination for Best Picture, it's worth looking at "The Dark Knight," the 2008 superhero flick that many cinephiles believe was robbed of its own nod — and why "Black Panther" is ultimately more worthy of the distinction of breaking this particular barrier against the superhero genre.

When "The Dark Knight" was snubbed 11 years ago, Ben Child of The Guardian attributed that decision to the Academy forgetting that "a film can be both critically and commercially successful." As he put it, "The Dark Knight" was "a revolutionary feat of technical nous which married spectacular set piece action sequences such as that remarkable non-CGI Hong Kong skydive with bravura storytelling and fine performances across the cast," and he lamented that its only Oscar nominations were for Best Supporting Actor (thanks to Heath Ledger's iconic performance as The Joker) and some minor categories.

While fans of the middle chapter in Christopher Nolan's epic "Dark Knight" trilogy were disappointed, the exclusion of "The Dark Knight" wound up having profound ramifications for Hollywood. In addition to sending Oscar voters the message that superhero films deserved to be taken seriously, the outcry prompted the Academy to expand its Best Picture category from five nominees to ten so that a wider range of critical and commercial successes could be included. If it had not been for that backlash, "Black Panther" may not be on the nominee list this year, and in that sense it owes a debt to support for "The Dark Knight."

Yet it is important to remember that, while "The Dark Knight" was indeed a very good movie, "Black Panther" is in many ways a superior film.

Because action set pieces and spectacular superheroics are a dime a dozen now, a genre picture regarded as the best of the year needs to deliver on other fronts as well. In the case of "The Dark Knight," the only non-technical category where it really stood out was in Ledger's performance as The Joker. The quality of his acting here cannot be understated: It was a chilling turn, simultaneously teeth-gnashingly anarchic and measured, and it upped the game for future supervillain performances. Yet apart from the scenes involving Ledger's Joker, there wasn't very much that was memorable about "The Dark Knight." Even the best writing in the movie — the scenes that discuss the duality between order and chaos, and how our concepts of good and evil frequently depend on social constructs rather than objective morality — are all lines that come from Ledger's mouth. When he isn't on screen, watching "The Dark Knight" amounts to checking your watch and awaiting his return.

"Black Panther," by contrast, is a superhero movie that never lags. The antagonist Killmonger (Michael B. Jordan) is just as intelligent and menacing as The Joker (I elaborate on the power of that character here), and unlike the purely malevolent clown prince of crime, Killmonger is a three-dimensional character with a poignant backstory. And when he isn't on screen, "Black Panther" is still fantastic: The main plot involving Black Panther/T'Challa (Chadwick Boseman) is gripping, as we watch the emotionally wounded prince learn how to become a wise and noble king. The special effects and action set pieces are easily the equal of "The Dark Knight," and they include visual flourishes (domestic rhinoceroses!) much more creative and memorable than the fare you'll find in most superhero movies.

Most important of all, though, "Black Panther" manages to be about something more than superheroics. Even though "The Dark Knight" was an intelligent superhero film, it still focused its commentary on the intricacies and deeper meaning of its own genre. "Black Panther," by contrast, discusses political issues that are lamentably grounded in our actual lives: racism, imperialism, concepts of political responsibility in terms of what leaders owe their people. Where "The Dark Knight" was allegorical in its handling of real-world issues, "Black Panther" took a direct approach, and in the process allowed its story to be even more ambitious than that of Nolan's magnum opus.

None of this is meant to diminish "The Dark Knight." It is still a great movie, with Ledger's central performance deserving its posthumous victory, and it's hardly a coincidence that no other superhero movie before now was acknowledged outside of technical and visual art-based categories (a possible exception could be made for Best Animated Picture nominees like "The Incredibles," "Big Hero 6," "The Incredibles 2" and "Spider-Man: Into The Spider-Verse," as well as "Logan" for Best Adapted Screenplay). None of the Joker incarnations that have followed Ledger have even come close to matching the power of his characterization.

Yet there is a reason why I chose "Black Panther" as the best blockbuster film of 2018. If the superhero genre is going to shed the dismissive contempt of culture snobs like Bill Maher, who insist that nothing about a superhero can be worthwhile unless it is solely directed at kiddies, it needs to put its absolute best foot forward. A movie like "The Dark Knight" was a great start because it featured a performance that few would dispute was among the best delivered by any thespian in any genre that year. Yet "Black Panther" took things to the next level by being a great movie on every level: Its directing, its acting, its special effects, its action scenes, its story. If anything, there should be more protests about the fact that stars Boseman and Jordan, director Ryan Coogler and co-writers Coogler and Joe Robert Cole weren't also recognized (though the film has been nominated for Best Costume Design, Best Original Song, Best Original Score, Best Sound Mixing, Best Sound Editing and Best Production Design).

At the very least, though, it's nice to know that "Black Panther" — which has already distinguished itself by breaking barriers when it comes to racial diversity in blockbuster superhero movies and becoming the highest grossing film domestically in 2018 — now has another notch on its belt. It certainly was one of the best films of 2018 and deserves to be recognized as such.