"Even though I'm angry, I still have that forgiveness in my heart for those students," the activist says 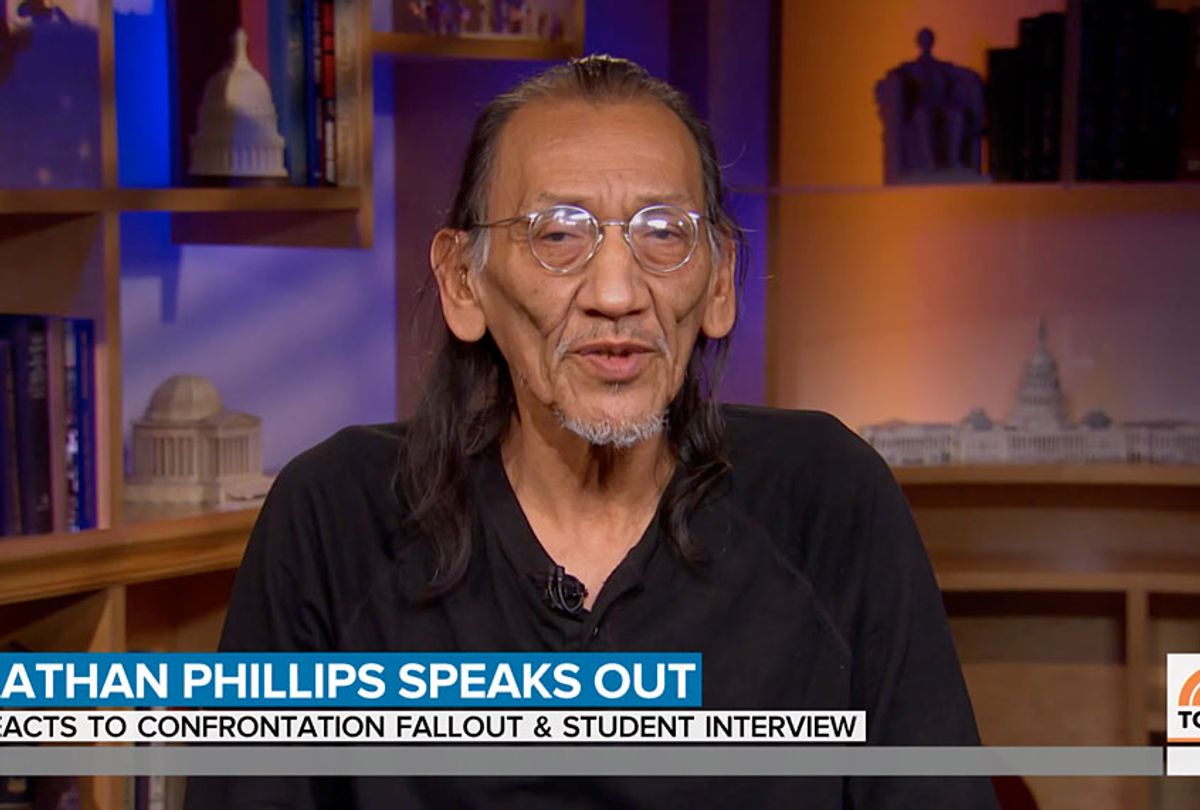 Native American activist Nathan Phillips, whose face-off with a Kentucky high school student was caught in a viral video, said that, while he was upset he had to watch the 16-year-old's Wednesday interview on NBC's "Today Show" he forgives him.

"Even though I'm angry, I still have that forgiveness in my heart for those students," Phillips told NBC's Savannah Guthrie on Thursday.

"I forgive him," Phillips said of Nick Sandmann, the Covington Catholic High School student who was seen wearing a "Make America Great Again" cap and a smirk on his face while standing in front of Phillips at the Lincoln Memorial in Washington, D.C.

Phillips, who was present for the Indigenous Peoples March, said he was at first disappointed by statements Sandmann released after video footage of the incident went viral.

"Coached and written up for him. Insincerity, lack of responsibility. Those are the words I came up with," he said. Phillips said that, after praying about the event, he "woke up with this forgiving heart. I forgive him."

Sandmann, a junior at a Roman Catholic high school in Kentucky, was with his classmates last friday in Washington, D.C. for the March for Life, an anti-abortion demonstration. He has emerged as the face of the apparent confrontation as video footage showed him appearing to be grinning while standing only about a foot or two from Phillips, a prominent activist. He said he was merely smiling and did not feel as though he owed anyone an apology or saw any fault of his own in the incident.

"As far as standing there, I had every right to do so," the student told Guthrie in an interview Wednesday.

"My position is that I was not disrespectful to Mr. Phillips. I respect him. I would like to talk to him," Sandmann told Guthrie. "I mean, in hindsight, I wish we could've walked away and avoided the whole thing."

Phillips said he was "trying to walk away" and heard the kids shouting, "Build that wall!"

"That mass of young men surrounded me and the folks that were with me," Phillips said, adding that when he did finally find a path to walk through the "clear space, a person was there. I was blocked."

Video footage from the confrontation shows some of the students, many of them wearing "Make America Great Again" caps, making what appears to be the Tomahawk chop gesture that Native Americans find offensive, as well as noises that seemingly mock Phillips' chanting, as the Native American troupe performs a song about courage and strength at the Indigenous Peoples March on the steps of the Lincoln Memorial. Sandmann, in a statement which was first published Sunday, denounced what he called "outright lies," claiming he was trying to remain calm to defuse the tense situation.

Phillips, in contrast, said the students' behavior "was understood by me and those with me as a mockery of our cultures."

Covington High School, which came under intense scrutiny after the incident, was closed Tuesday "due to threats of violence," the Diocese of Covington and the school said in a statement. The school said it "will reopen when they say it is safe to do so."

Earlier on Tuesday, principal Robert Rowe said Covington Catholic High School had made the decision to close "in order to ensure the safety of our students, faculty and staff" after meeting with local law enforcement.

"All activities on campus will be cancelled for the entire day and evening," Rowe said in a letter obtained by The Cincinnati Enquirer. "Students, parents, faculty and staff are not to be on campus for any reason. Please continue to keep the Covington Catholic Community in your prayers."

Meanwhile, the American Indian Movement Chapters of Indiana and Kentucky, which had been planning to hold a "peace vigil to call for an end to racism" outside the Kentucky high school, moved its demonstration a couple miles to the headquarters of the Diocese of Covington. On its Facebook page, the Native American group insisted that "not once have we, as an organization, threatened anyone."

The group also said that, an hour and 46-minute video that surfaced in the aftermath of Friday's confrontation in Washington, which supporters of the Catholic students have alleged is proof they were victims – not aggressors – "does not absolve those boys of their behavior." They continue to stand by Phillips. The 63-year-old activist, the group said, was attempting to "diffuse the situation" between the Catholic students and some Black Hebrew Israelites, which erupted earlier. The group said Phillips was disrespected by the very kids he had tried to defend.

"In the video, you can see the boys approaching and surrounding him after he stops moving and that one boy steps up to face him – not the other way around," the group said. "Their behavior at this point is still a problem, even if they did not create the initial situation. They are seen mocking, laughing at and disrespecting Nathan Phillips."

Phillips and his supporters blame the chaperones who took the students to Washington for a Right to Life March for failing to control them once the shouting began. In his statement, Sandmann confirmed that adult chaperones were with them; however, he claimed that Phillips had targeted him specifically. "He played his drum the entire time he was in my face," he said. Phillips, meanwhile, said he would be willing to meet with the students as a representative of the Indigenous Peoples March and dismissed Sandmann's statement as partially false.

"I have read the statement from Nick Sandmann, the student who stared at me for a long time. He did not apologize, and I believe there are intentional falsehoods in his testimony," Phillips said in a statement Tuesday. "But I have faith that human beings can use a moment like this to find a way to gain understanding from one another."

Philipps reiterated this point in his interview with Guthrie. He said that while he believes the chaperones "should have said to those students, 'This isn't the place,'" he noted, "forgiveness goes to those chaperones, those teachers."

Philipps and Sandmann both claimed that they have been threatened. Sandmann denied earlier claims by Phillips that the students chanted President Donald Trump's mantra "build that wall" or "anything hateful or racist at any time."

On Tuesday, Trump tweeted his support for the students, calling Sandmann and the others "symbols of Fake News." Trump's eldest son, Don Jr., also spoke out in support of the students Monday night on Fox News.

Covington High school has apologized to Phillips on behalf of the students, and the principal promised "an independent third-party investigator" would investigate the viral incident that took place in the nation's capital. That statement did not elaborate on the investigation or who would conduct it.

The Diocese of Covington called Friday's encounter "a very serious matter that has already permanently altered the lives of many people. It is important for us to gather the facts that will allow us to determine what corrective actions, if any, are appropriate."