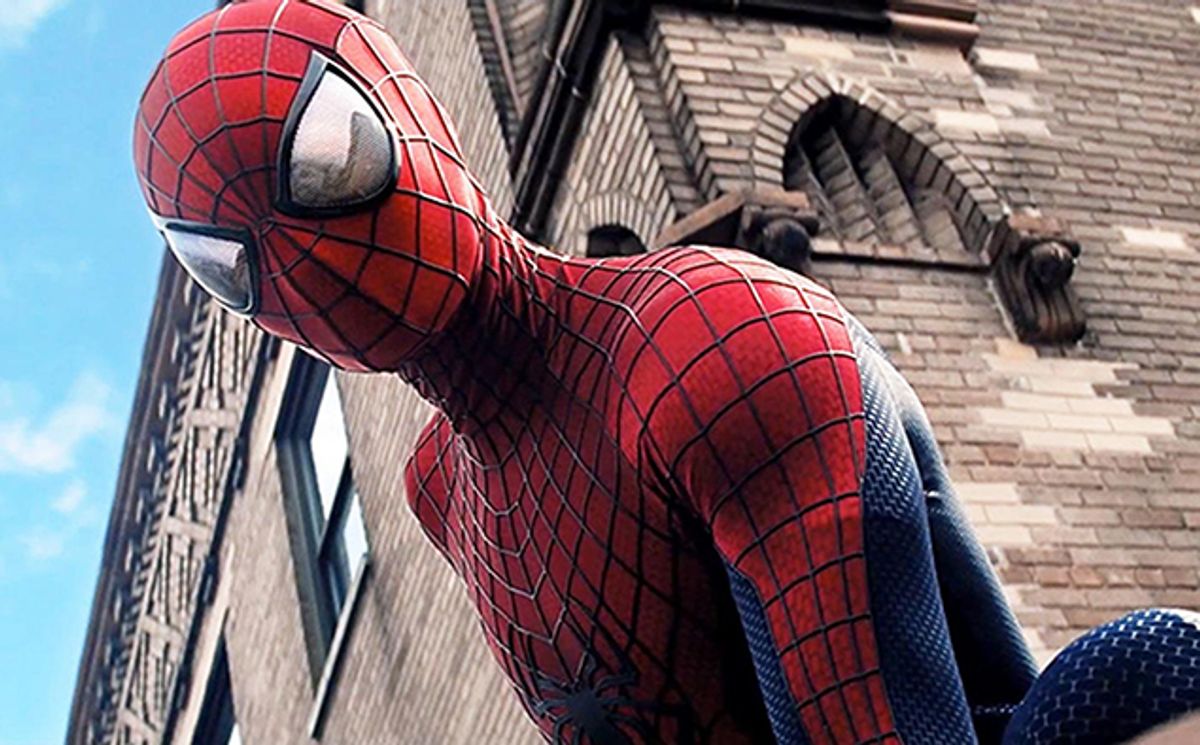 Like many people over the holidays, I spent some time — maybe too much — playing one of the most popular and best reviewed video games of 2018: “Spider-Man.”

While I thought I’d be taking a break from chemistry research, I found myself web-swinging through virtual research missions all over New York City. I collected samples of polycyclic aromatic hydrocarbons in Hell’s Kitchen, studied vehicle emissions in Chinatown and determined the chemical composition of atmospheric particulate matter in Midtown.

“Spider-Man” has many of these eco-friendly research missions. But what I found most encouraging is that the game also includes tools that can potentially teach advanced concepts in chemistry and physics. These tools include adjusting the wavelength and amplitude of radio waves, rewiring circuits to meet target voltages, and what will be examined here, using absorption spectroscopy to identify unknown chemicals.

Beleive it or not, the millions of people playing “Spider-Man” have been unwittingly introduced to principles of quantum mechanics. There is a lot of veiled science to this aspect of the video game. Perhaps more importantly — as a chemistry researcher and university lecturer — I believe the game represents an interesting opportunity to teach science in a fun and engaging way in higher education.

To better understand the scientific technique that players simulate in “Spider-Man,” it helps to have a short primer on what absorption spectroscopy is.

The interaction of light with matter is the most powerful means scientists have to understand what matter is made of. When matter does not interact with light, we are quite literally left in the dark. This problem is made obvious in the still unknown composition of dark matter that constitutes the vast majority of matter in the universe.

Using light to study ordinary matter like atoms and molecules is a broad field of science known as spectroscopy. It is an important part of university courses in chemistry and physics. There are currently many different types of spectroscopy. However, the underlying concepts are almost entirely the same as the original version that began in the 17th century when Isaac Newton first dispersed sunlight with a prism.

As famously illustrated on Pink Floyd’s “Dark Side of the Moon” album cover, dispersing the white light of the sun with a prism reveals its continuous color spectrum extending from violet (higher energy, shorter wavelength) to red (lower energy, longer wavelength). However, if this is done carefully, you would find that this continuous spectrum is patterned with intermittent dark bands.

While the origin of these dark bands was not fully understood until the 20th century, scientists now know that they are due to absorption of specific wavelengths of light by atoms and molecules present in the sun. In fact, this kind of spectroscopy led to the discovery of helium in the solar spectrum before it was identified on Earth. This is why it derives its name from the Greek “helios” meaning sun.

So what causes this phenomenon? Atoms and molecules have a set of energy levels that depend on how their electrons are arranged. The absorption of light — which remember is energy — can cause the electrons to rearrange into these different levels. The catch is that the energy — or wavelength — of light must exactly match the energy difference between two electron arrangements in an atom or molecule for absorption to occur. This set of energies is unique for each chemical and leads to a distinct absorption spectrum much like a fingerprint from which it can be identified.

In “Spider-Man,” the player identifies unknown substances using simplified versions of these spectra.

The goal is to match the pattern in the spectrum using the fragment inventory provided to give the absorption spectrum of the unknown substance. Unfortunately for chemists everywhere, determining the chemical structure of an unknown molecule is much more complicated.

Still, there is a significant amount of science conveyed in the video game version of what a spectroscopist would call assigning this spectrum. Only slight modifications and additional explanation could make these parts of the game an excellent way to teach these concepts to undergraduate science students. But are video games ever used in higher education?

Video games for teaching more elementary skills like arithmetic or spelling are common. Similarly, colleges and universities are increasingly infusing video games into their coursework.

In a recent publication in the journal Nature Chemistry, researchers presented a modified version of the video game “Minecraft” called “PolyCraft World.” In this game, the player learns polymer chemistry by crafting materials in the game. Preliminary results showed that students learned real chemistry through the game even though they weren’t doing it for grades or getting regular classroom instruction.

In the popular game “Kerbal Space Program,” the player builds their own space program by successfully launching rockets into orbit. The game was not originally intended for educational purposes but implements rigorous orbital mechanics in its physics calculations. It is so accurate that NASA joined the game’s developers to create new missions, and it now has a teaching-ready standalone game that could be used directly in university physics courses.

A unique approach has been taken with the biochemistry-based game “FoldIt.” This game serves as both an educational as well as a citizen science platform. In the game, players manipulate the structures of real proteins to search for the “best” or lowest energy structures. Results published in the journal Nature showed that the player’s search methods can be successfully combined with computer-based algorithms to solve actual scientific problems.

The use of video games in higher education is a real possibility and could even have a promising future in higher education given the advantages of delivering educational content through a video game format. These advantages include things such as remote access, personalized student progress and immediate feedback. However, creating an engaging video game from scratch is challenging, costly and time-consuming. As indicated by the creators of “PolyCraft World,” finding existing games to modify for educational purposes — like the research missions in “Spider-Man” — could be the best way forward.