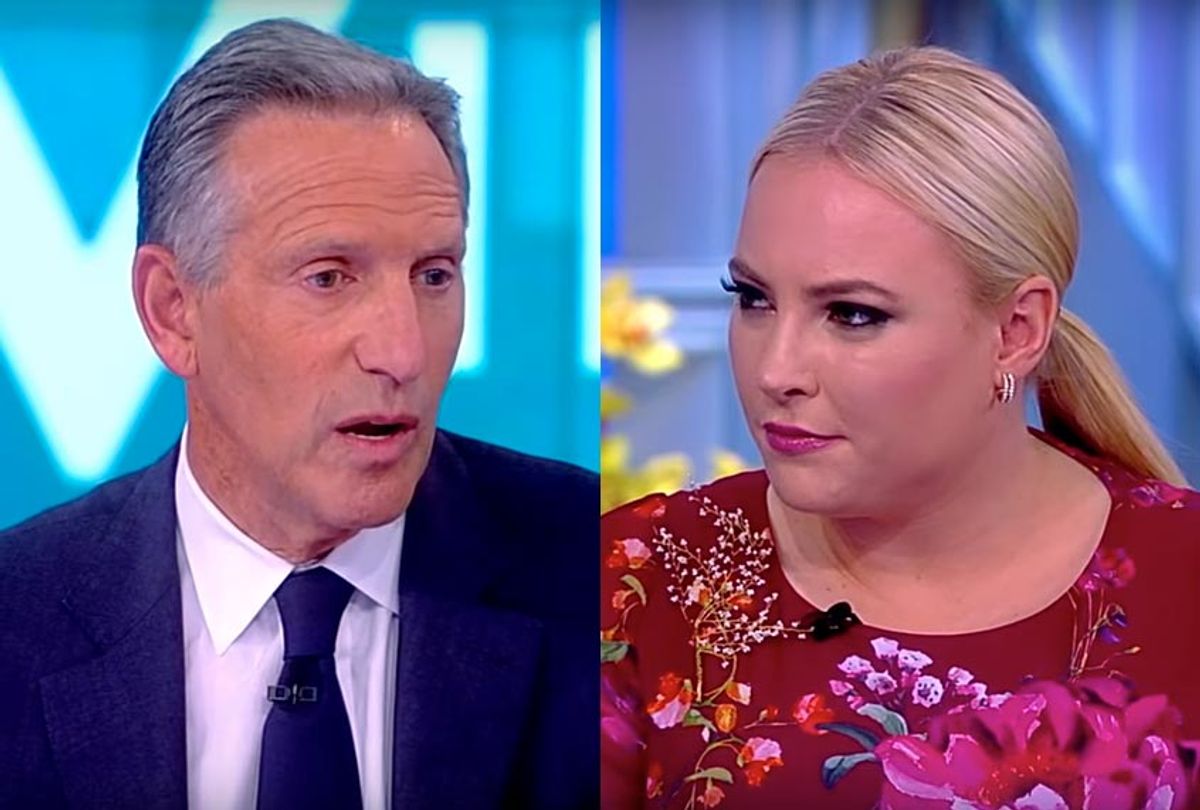 Howard Schultz illustrated to "The View" co-host Meghan McCain how the ongoing Republican culture wars, chief among them the divisive issue of abortion, are actually the weaponization of wedge issues to distract Americans from the most important problems they face.

The potential third-party presidential candidate argued he could serve as an unifier-in-chief, but invoking President Donald Trump, the panel on "The View" grilled Schultz on Tuesday over his lack of government experience.

"It's not the success I've enjoyed at Starbucks. It's the leadership that I have been able to create, and I think that understanding with great compassion and empathy all different kinds of people," Schultz explained. "Having government experience, I think is not a disqualifier. I think the qualifier is: Can you bring the country together? Can you lead people? And I think can we restore a sense of values, and compassion and empathy back into the American spirit and our standing in the world. And that's what I believe I can do."

The former Starbucks CEO argued that missing ingredient on his resume was not enough to disqualify his potential 2020 run as a "centrist independent" outside of the traditional two-party system. Shultz touted a skill he thinks modern-day politicians lack: his self-proclaimed ability to unite Americans by building bridges across divided factions.

But McCain, who frequently laments the lack of bipartisanship in the Congress once championed by her late senator-father on "The View," suggested that ongoing culture wars were too divisive for such a candidate to actually succeed.

"But there's also a culture war raging in this country," McCain responded to Schultz. "So, like a question I thought is: Did you support Brett Kavanaugh becoming a Supreme Court justice?"

After responding in the negative, McCain asked Schultz what type of person he would put on the nation's highest court. Before he could even answer, McCain tagged on a second question, "Pro-life?"

"But these are culture wars," McCain said. "Like, you've already lost me. I'm really pro-life. So like –"

"I shouldn't lose you," Schultz interjected.

"Which lane are you going on?" McCain responded.

"This is the problem: We should be able to disagree on those kinds of issues and yet come together on what's most important for the country," Schultz said.

"But being conservative and my conservative pro-life values are very important to me," McCain said. "And you're trying to win over, I assume, a lot of Republicans, and there are just some issues we're not going to meet in the middle on. It's why we have been a two-party system since 1865 since the Whigs. "

Schultz then grasped hold of the conversation by explaining to McCain that the most important thing facing the U.S. right now was neither abortion or any other "culture war" issue. As it turned out, the very GOP talking points she had just recycled had hampered their ability to get to the meat of the issue.

"The most important thing facing the country right now is answering the question in the affirmative, and that is: Do we believe that our children and our grandchildren are going to have a better life than we do?" Schultz asked. "And most Americans today believe that is not the case, and that is unacceptable to me. So I want to do everything I can to restore a sense of financial security and a real belief in the promise of the country."

Earlier in the segment, Schultz had asked the studio audience if anyone believed that the current system, leaving Trump out, was working well on behalf of the American people. And the response was a very audible and firm, "No."