Americans are alienated, and football won't fix that 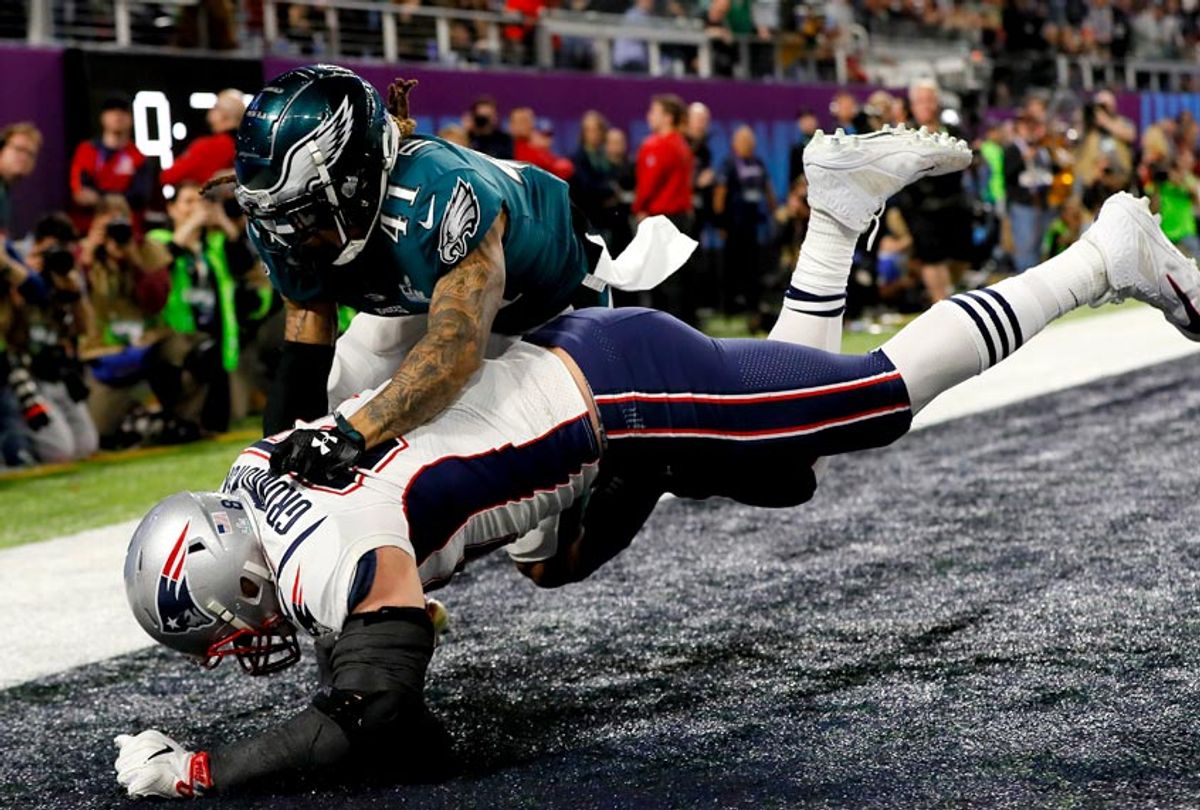 We have heard, it would seem, more than enough reasons to stop watching football: from the outsized risk of brain trauma apparently inherent to the game, to the exploitation of black athletes by a league whose power brokers are overwhelmingly white, to the miserable working conditions of NFL cheerleaders, to the culture of hypermasculinity it fosters, leading to the deaths of young men on the practice field and violence against women off it.

Yet, even with all these controversies, even as Americans increasingly pull their young sons out of the game, support for football remains high. After a dip in ratings last year, the NFL is back in full force this season, seemingly impervious to criticism and extending welcoming arms to an enthusiastic fan base that apparently wants nothing more than to return to the comforting tradition of watching Tom Brady win yet another Super Bowl, averting their eyes when the ugliness becomes too much to bear.

This feminist philosopher is repulsed by football’s myriad abuses and senseless harms. But as a fan raised on the sport, I have to admit that I find it hard to give up entirely. If you talk with many deep-thinking football fans—including former players—they will tell you something similar. At the turn of the twentieth century, the philosopher William James found himself in a strikingly similar predicament.

James was part of the growing pacifist movement of the time, committed to the anti-war cause but worried that it was ultimately hopeless. Barely a generation removed from the Civil War, Americans were well aware of the horrors of war yet always seemed ready for a fight, balking at the idea of diplomatic solutions to international conflict. How could the pacifist movement hope to succeed in the face of such deep-seated emotional attachment to war?

James proposed a solution in the 1906 address “The Moral Equivalent of War”. His approach was not to try to convince people their attachment was wrong, but to take that attachment seriously—to recognize that it might be indicative of a deeper need that could be addressed in less destructive ways.

Beneath Americans’ attachment to war, James thought, was the tacit recognition of the values of discipline and self-sacrifice that militarism inevitably called forth, an inner “pugnacity” that could not be eliminated, even from enlightened folk, and above all, an anxiety about the end of manliness that the post-industrial age seemed certain to usher in. Satisfying these desires and calming this anxiety was only a matter of finding the right substitute. James proposed instituting compulsory enlistment in a public works service corps for all able-bodied young men—effectively a domestic Peace Corps. Rather than slaughtering their fellows on the field of battle, these young men would labor and sacrifice while away from their families to build bridges and clear fields, doing their part in humanity’s long struggle in the Sisyphean work of civilization’s survival.

Though James’s solution was not taken up in America, his diagnosis of the problem was, at least in part—in particular by the very men who popularized football. Even today, football is heralded by its proponents as the singular tool for preserving masculinity, and for teaching discipline and self-sacrifice. Moreover, men from University of North Carolina Coach Larry Fedora to Donald Trump decry critics of football’s violence as imperiling the future of the country, suggesting that without football, we would be in grave danger as a society. In danger of what, exactly, isn’t clear. The threats are evident, at least as they are envisioned by some of football’s staunchest proponents: softness, feminization, or even loss of control of the men they gawk at on the field, who may just might start “running the prison” if they aren’t careful.

My instinct is to write football off entirely, to reject it as hopelessly backward, and to condemn those who find themselves attached to the sport—myself included—as fundamentally morally deficient. But, as James said of such approaches to eliminating war, “as a rule they do fail,” both for alienating their audiences and for failing to inspire the kinds of feelings for which people are willing to sacrifice.

What would happen if instead we followed James’s strategy, and took people’s attachment to football seriously as a moral issue? Part of some fans’ attachment to football is clearly a disturbingly rosy view of masculine domination, hierarchy, and obedience to leadership that was at home in early-twentieth-century white America but which many of us today rightly reject. Such attachments should not be ignored—but neither should they be indulged as the one unshakeable underlying longing.

Thinking of my own upbringing as a football fan, I remember being far less interested in the militarism of the game itself than in the way its rituals brought me close to my family and community. Listening to football players of all ages, I am struck by the obvious thrill they experience both in working together and in pushing themselves to exceed what they thought possible. Watching students on college campuses who are sometimes isolated and far from home find friends by recognizing familiar team colors on a sweatshirt across the classroom makes me pause to reconsider what it is that fans love, when they say that they love football.

But still, contrary to James’s view of war, I do not see in football as such a set of values worth preserving. Too often, the values football has passed down are all too clear in their commitment to domination and destructiveness. But rather than suggesting that we fight against Americans’ attachment to football, or that we try to argue ourselves out of it, we should recognize in that attachment something deeper, which has the potential to be productive rather than destructive. Beyond the nostalgia and hierarchy, there is a human desire for connection, belonging, and celebration of the capacity to overcome obstacles together. In our social-media-siloed and fragmented world, football has been helping us fulfill a genuine need. That fulfillment has come at a terrible, unacceptable price. But it is the price, not the need, that is within our reach to change.

We should move away from football. We should think creatively about what sorts of community institutions, public spaces, physical education, or changes to our political process could wean Americans from our dependence on this ritual. But getting over it will take more than making moral arguments. It will take finding and supporting other practices that give people access to those increasingly scarce connections, experiences, and conversations in non-destructive ways.

Erin C. Tarver is an associate professor of philosophy at Oxford College of Emory University and the author of "The I in Team: Sports Fandom and the Reproduction of Identity."