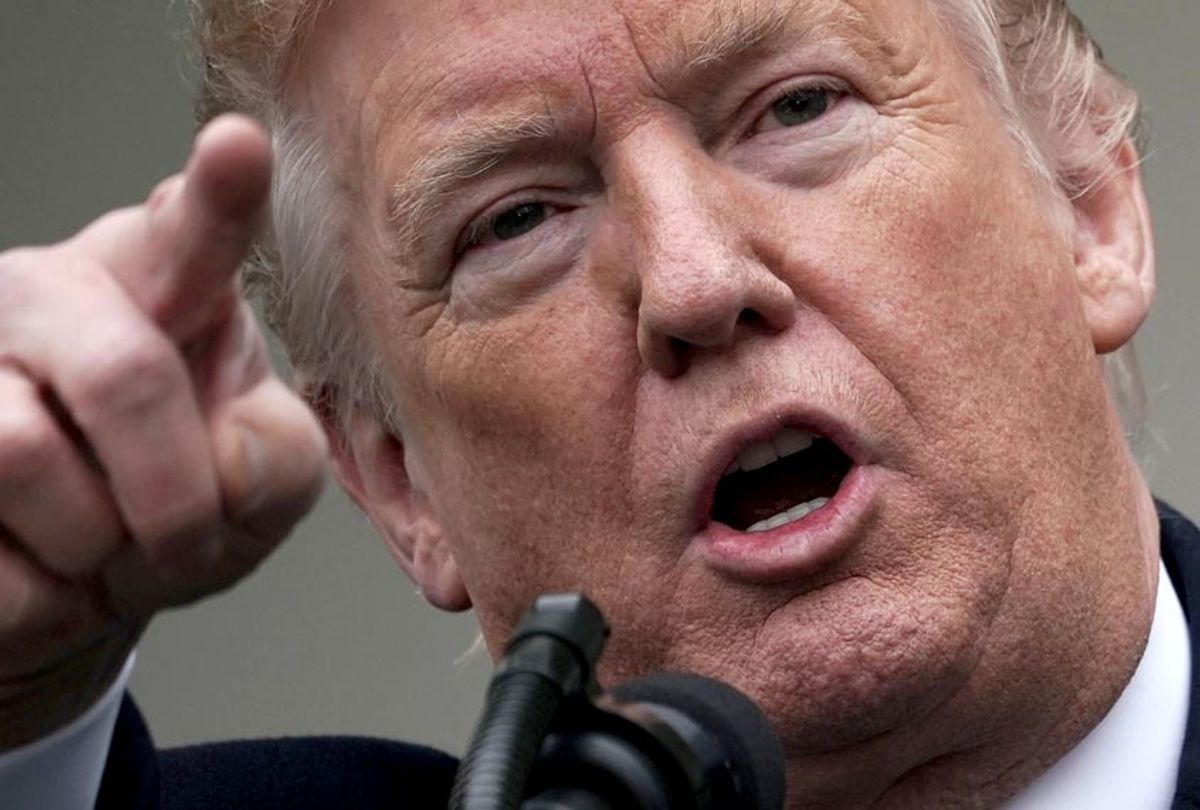 President Donald Trump doubled down on criticisms of his own intelligence leaders during a conversation about foreign policy on a segment of CBS News' "Face the Nation" that aired on Sunday.

After claiming that he had read a report presented by his intelligence leaders testifying on Capitol Hill, Trump told anchor Margaret Brennan that his complaint wasn't about the report itself but about other statements made by his foreign policy advisers.

"It was the questions and answers as the report was submitted and they were asked questions and answers," Trump explained. "We've done an incredible job with Syria. When I took over Syria it was infested with ISIS. It was all over the place. And now you have very little ISIS and you have the caliphate almost knocked out. We will be announcing in the not too distant future 100 percent of the caliphate which is the area — the land — the area — 100. We're at 99 percent right now, we'll be at 100."

He added, "When I took it over it was a disaster. I think we've done a great job with that. At the same time, at a certain point, we want to bring our people back home. If you look at Afghanistan we're going in very soon we'll be going into our 19th year spending 50 billion dollars a year. Now if you go back and look at any of my campaign speeches or rallies, I talked about it all the time."

Trump proceeded to explain to Brennan that his goal is to bring American troops home from overseas wars, citing the conflicts in Syria, Iraq, North Korea and Afghanistan as examples.

Last week Trump aroused controversy when he tweeted criticisms of his intelligence leaders for making statements that seemed to question Trump's foreign policies.

"When I became President, ISIS was out of control in Syria & running rampant. Since then tremendous progress made, especially over last 5 weeks. Caliphate will soon be destroyed, unthinkable two years ago. Negotiating are proceeding well in Afghanistan after 18 years of fighting. Fighting continues but the people of Afghanistan want peace in this never ending war. We will soon see if talks will be successful? North Korea relationship is best it has ever been with U.S. No testing, getting remains, hostages returned. Decent chance of Denuclearization..." Trump wrote in his initial pair of tweets.

He later added, "...Time will tell what will happen with North Korea, but at the end of the previous administration, relationship was horrendous and very bad things were about to happen. Now a whole different story. I look forward to seeing Kim Jong Un shortly. Progress being made-big difference!"

Trump also tweeted about Iran, writing that "the Intelligence people seem to be extremely passive and naive when it comes to the dangers of Iran. They are wrong! When I became President Iran was making trouble all over the Middle East, and beyond. Since ending the terrible Iran Nuclear Deal, they are MUCH different, but a source of potential danger and conflict. They are testing Rockets (last week) and more, and are coming very close to the edge. There economy is now crashing, which is the only thing holding them back. Be careful of Iran. Perhaps Intelligence should go back to school!"