Blackface and hypocrisy: Northam must go, but Republicans have no moral standing on racism

Northam had one chance to apologize and atone. That's gone now — but Republicans should clean up their own house 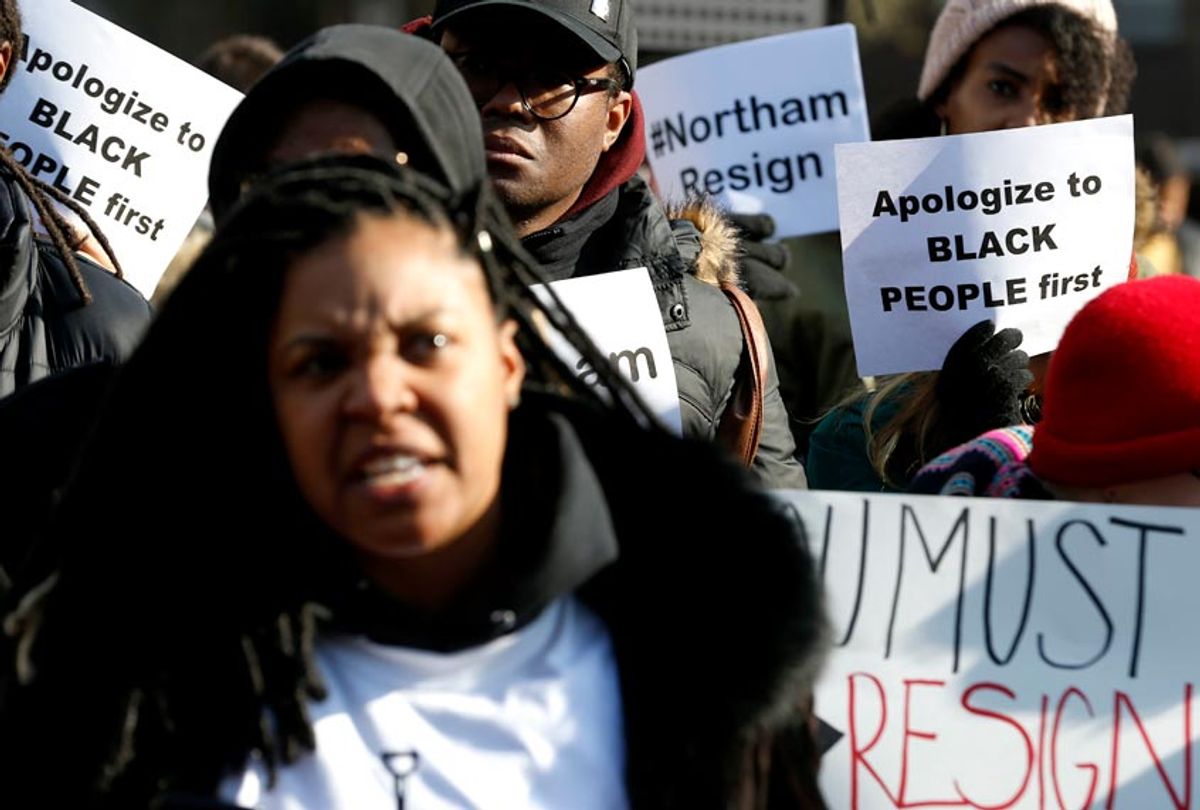 Demonstrators hold signs and chant outside the Governors Mansion at the Capitol in Richmond, Va., Saturday, Feb. 2, 2019. (AP/Steve Helber)
--

It is never appropriate for a white person to put burnt cork, shoe polish paint or other substances on their face in order to impersonate a "black" person. This is demeaning and dehumanizing. It gives at least tacit permission for racist violence against African-Americans and other nonwhite people.

Blackface minstrelsy was wrong in the 19th and early 20th centuries when it played a major role in American popular culture. It is wrong in the 21st century as well.

Virginia Gov. Ralph Northam apparently never learned this lesson -- or, just as likely, he knew better and because of a sense of white privilege and entitlement thought that such rules of human decency did not apply to him and other white men of his social class.

On Friday, a page from Northam's 1984 yearbook at Eastern Virginia Medical School was made public online. On his page there are several photos of Northam and an image of a young white man in blackface (who is dressed like the racist caricature "Jim Crow") and another person wearing the uniform of America's largest terrorist organization -- a white Ku Klux Klan robe. The photo was apparently taken at a costume party.

In response, Northam apologized, saying on Friday that: "Earlier today, a website published a photograph of me from my 1984 medical school yearbook in a costume that is clearly racist and offensive. I am deeply sorry for the decision I made to appear as I did in this photo and for the hurt that decision caused then and now."

The next day, he backtracked, insisting that neither of the men in the offensive yearbook photo was actually him. Instead, Northam offered another scenario and admission: Yes, he did appear in blackface once, but only for a dance contest when he pretended to be Michael Jackson.

The shoe polish apparently enhanced Northam's ability to dance: He told reporters during his Saturday press conference that he used Jackson's legendary "moonwalk" to win the contest.

Northam, a man who grew up in the American South in the immediate aftermath of the civil rights movement, also claims he did not know that donning blackface was offensive.

Northam's pivots and denials are problematic in another way as well. That he cannot even recall if it was him or someone else dressed as a Klansman or a blackface race minstrel suggests that such behavior was sufficiently common in his social circle that there are likely other problems with Northam's personal character that may disqualify him from holding public office. (Other photographs from the same yearbook suggest this may be the case.)

Northam should resign immediately. He has lost any moral legitimacy to lead a multiracial and ethnically diverse state. For him to remain in office is an affront not just to black Americans but to any and all decent people. As a report published Saturday in the Washington Post observes, Northam's betrayal is even more glaring because he "built his political career on denunciations of his state’s racist past, attacking Confederate monuments and energetically courting African American voters."

Within hours of the blackface photo appearing online, leading Democrats both in Virginia and nationwide -- including most of the likely candidates for the 2020 presidential nomination -- called for Northam to step down. At this writing, he refuses to do so.

Republicans and the right-wing media have also demanded that Northam resign from office. This is a good deal more problematic. This supposed disgust by conservatives is not based on a principled rejection of either racism or white supremacy. Rather it is an opportunity to score political points by distracting public attention from the fact that it is the Republican Party, not the Democratic Party, that has been wrong on almost every question of racial justice, human dignity and the color line for at least the last 50 years.

In this way, the more Republicans condemn racism and white supremacy the more obvious it becomes that they support such ideas, beliefs and practices. This is a feedback loop that Republicans and conservatives created. Selective condemnation of racism (or sexism, bigotry, nativism, homophobia or any other form of bigotry) is not virtuous; it should not be applauded. At the heart of racism is hypocrisy. Today's Republican Party and conservative movement excel at both.

Examples of this are almost too numerous to list. The Republican Party has mined white racism and white racial resentment as the primary fuel for its political machine since President Richard Nixon and the infamous "Southern strategy."

Donald Trump can fairly be described as an unrepentant racist. He suggested that at least some of the neo-Nazis and KKK members who rioted in Charlottesville were "very fine people." He has repeatedly tried to ban Muslims from entering the United States, and has slandered Latino immigrants as being natural-born rapists, murderers and thieves who come to American to "breed" and "infest" the country. It is Trump's official policy to put brown and black migrants and refugees from Latin and South America in concentration camps.

Trump has used derogatory terms for majority black countries. He and his father discriminated against blacks and other nonwhites by refusing to lease them property. He built his political career on the implication that Barack Obama was not born in the United States, making our first black president a usurper.

Trump's White House is or has been infested at the highest levels with white racists, most prominently adviser Stephen Miller, who has driven Trump's immigration policies. Miller's apparent goal is to advance white nationalism by reshaping American policies to hurt nonwhites and to further elevate and privilege those white people perceived as allies.

Rep. Steve King, an Iowa Republican, has routinely channeled white supremacist and neo-Nazi talking points for years. His racist views are no secret but only recently became an embarrassment. At long last, he has been stripped of his committee assignments by House Republicans -- many of whom endorsed King for re-election last year.

Numerous racist and white supremacist organizations have enthusiastically endorsed and supported Trump, claiming him as their hero, and defender.

In recent decades, the Republican Party has systematically attempted to gut the civil and human rights of black people and other nonwhites. Public opinion and other research shows that white Republicans are more likely to be racist and racially resentful than white Democrats. This is especially true of Donald Trump's voters and other supporters.

What are some lessons to be learned from Ralph Northam's fall from grace?

If Northam had admitted, without equivocation, that he was in the photograph and was ashamed of his racist behavior, and said he had worked for years to become a better person, he would likely not be facing political self-immolation today. Instead he chose to tap dance around the truth. Now no hands -- black or brown or white -- will likely reach out to save him.

What of the claim by Northam's defenders that his alleged transgression took place some three decades ago and his behavior since then shows him to be a good and righteous man, especially on matters of racial justice and human rights? Shouldn't he be forgiven?

Personal growth begins by acknowledging wrongdoing and not denying it. Without that gesture everything that follows is suspect. This is as true of Ralph Northam's apparent past racism as of the sexual assault allegations against Supreme Court Justice Brett Kavanaugh.

This is also true for the Republican Party. It can have no credibility on questions of racial justice and human rights unless and until it purges the racists from its ranks (and abandons its anti-black and anti-brown policies). This extends from Donald Trump on down to the party's core voters.

Of course this will not happen, or at least not anytime soon. Racism is embedded in the brand of today's Republican Party. To ask its leaders, news media and public to disavow a core part of their collective identity would be like asking someone to cut off his own hand with a knife. If the gangrene is spreading and the rot is bad enough, yes, it can be done. It is necessary, and it will be painful.