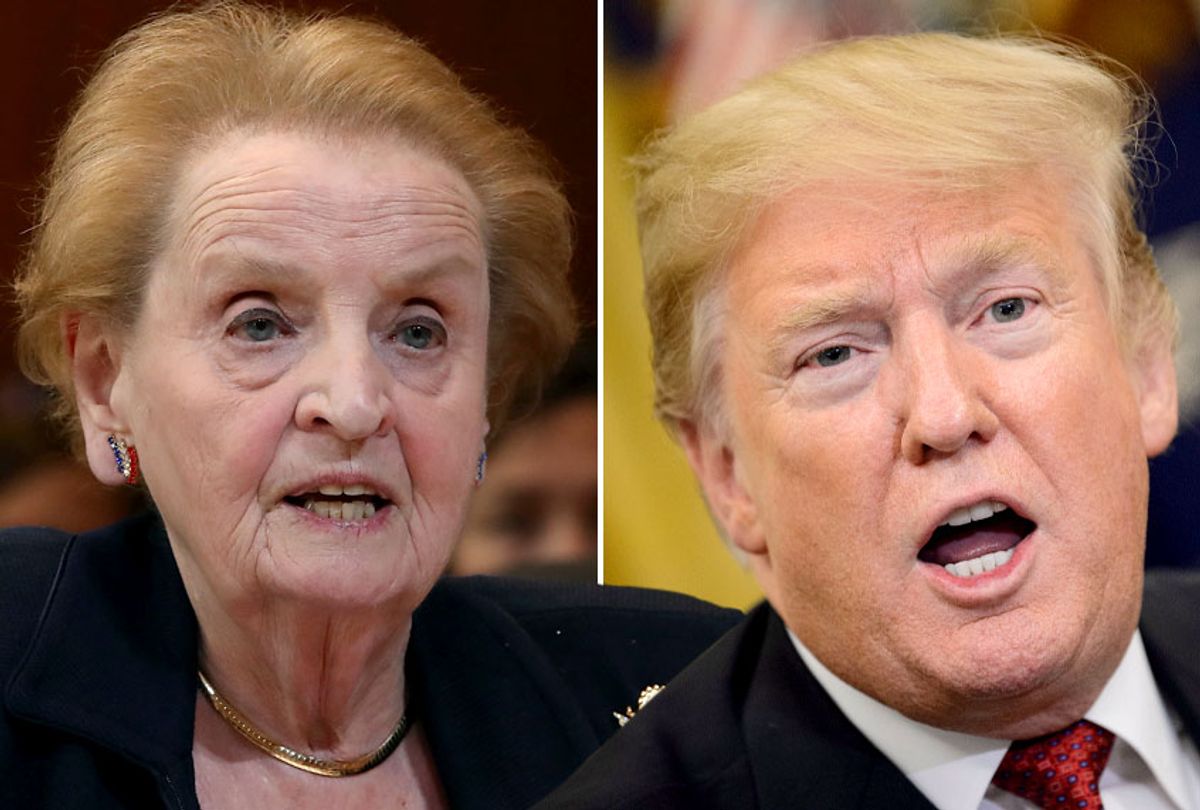 This interview is part of a  two-part series.

It's easy to recommend "Fascism: A Warning," the new book by former Secretary of State Madeleine Albright. For any layperson looking to quickly catch up on the major foreign policy issues facing the United States today, it is an accessible and informative read. More important, though, it's necessary to acknowledge why Albright's voice should still be heard today.

As America's first female secretary of state, she has inspired a generation of women to take the lead as she did in making sure America did not lose its stature as a premiere world power. Whether this was for better or worse depends on your views toward American geopolitical hegemony, but no one can argue that she was a tough, smart and effective advocate for America's interests throughout the globe during President Bill Clinton's second term. This made it particularly interesting to hear her thoughts on America's relationships in countries as vastly different as North Korea and Israel, her views on the future of women in politics and her own status as a pop culture icon.

Do you think [President Donald] Trump's appeasement toward [North Korean President] Kim Jong-un has left long-term negative effects, or is this a strategy that could prove fruitful or at least salvageable by future administrations?

Well let me say, every administration that I've read about since the end of World War II has had a very difficult relationship with North Korea. There's no question about it. And then also since the Korean War — for which we do not have a peace treaty — there are issues where we have had not relationships with North Korea, and we have no embassy in North Korea. We do know that they have a nuclear capability and missiles. So those are the problems.

I do think that many administrations — including the one that I was in, and I was the highest-level sitting official to have met with the North Koreans until the present administration — is that they are not easy to deal with, and they are threatening, so I am concerned about the following things: First of all, at the beginning of the Trump administration, there was a lot of "fire and fury" talk and threats and things like that, which I thought were counterproductive. I do believe in diplomacy. But I also do believe in prepared diplomacy. I was asked whether the Singapore summit was a win-win or a "Kim win." It was a "Kim win" because the President canceled some exercises that we have with our allies, the Japanese and the South Koreans, and it's unclear to me what the North Koreans gave or what it is that they put up to this, especially since they have not agreed to any kind of way of an inventory or international way of figuring out what they have and what denuclearization — which is what we are trying to get — what is the measurement of that, what's going on.

There's about to be another summit. I do think that there have been some negotiations, or at least talks about it, at a lower level, but we'll see where it goes. I think the hard part is, in terms of the next administration, I think it's very hard to figure out what President Trump is promising. I hope he doesn't do something like say, 'There will never be any exercises with our allies' or promise to withdraw our troops from South Korea, or things that then have an effect.

By the way, when I was in North Korea [President] Kim Jong-il, the father of the current president there, said that he didn't have any problems with us having our troops in South Korea. I do think that what is worrisome to me is, in an effort to be flattered by Kim Jong-un, that he gives away something that might have a longer term effect for the next administration.

I'm speaking as a Jewish person myself, and I know that you are of Jewish heritage partially, about how one can criticize Israel in legitimate ways without crossing the threshold into anti-Semitism. I feel like when it comes to debates about Israel, that has been a very sensitive subject and I'm curious as somebody who has helped govern American foreign policy toward Israel, what advice you would give to people attempting to have fair and un-bigoted but thorough discussions about that issue?

Well, I do think that I have been a supporter of Israel from day one and I believe that it is an essential relationship that we have. I think that there are… I wish, having been a part of all this, that President Clinton would have been able to actually accomplish an Israeli-Palestinian peace. We were very close. I do think that it would be better if there were a two-state solution and that there were issues that Israel was dealing with in a way that made it possible for them to operate in the Middle East, in so many ways. But I believe fully in the importance and existence of Israel.

But I think there's a separate issue which has something to do with… you haven't really asked me about some of the things that are going in Europe at the moment, and that is the rise of anti-Semitism. I think that one has to be incredibly sensitive to the fact that it is obviously unacceptable and why it comes up. And when it is just — the way you put the question, linked to Israel and their behavior — then it just creates larger problems in terms of something that is out there, and that I talk about it in my book, in terms of blaming "the other" and giving voice to those who want to blame somebody. It's all I think unjustified, and something that happens as people search for simplistic arguments.

How do you feel about the presence of so many strong female candidates in the 2020 [presidential] race? Democrats [Massachusetts Sen.] Elizabeth Warren, [California Sen.] Kamala Harris, [New York Sen.] Kirsten Gillibrand, [Hawaii Rep.] Tulsi Gabbard, have already announced their candidacies. Does this make you feel encouraged? Do you feel that we've made progress in the right direction toward gender equality and how do you feel it reflects on you on being a trailblazer as America's first female Secretary of State?

Well, I think it's great that there are so many women candidates. I really do. And I think that it is a sign of movement and change. I also think what's terrific, I just met with all the new members elected to Congress in both parties, and it really is a female cohort, and I think it will make a difference. I think it's great. I think one of the things when I… First of all, it's so strange to kind of go back and think. I mean, it's been, it's about 20 years that I left office. When my name came up first to be Secretary of State, people said, 'Well, there's no way a woman could be Secretary of State,' and then, I have to tell you, my youngest granddaughter made a great remark about eight years ago when she was seven, she said, 'So what's the big deal about Grandma Maddie being the Secretary of State? Only girls are Secretary of State.' When something happens, you don't know, you don't think it'll ever happen, and then all of a sudden it kind of seems totally normal. I'm very proud that I had that position. I have to tell you that one thing I did do when I was secretary was to make women issues central to American foreign policy, and that's not just because I'm a feminist but for logical reasons, that countries are better off and more stable when women are politically and economically empowered. That's not just true about foreign countries, it's true in our country. I do think that, and I'm very pleased that there so many women candidates.

You are a guest star on both "Gilmore Girls" and "Parks and Recreation," are you a fan of those shows, and objectively speaking, how awesome was that?

Well, let me just tell you, you missed one show. I was on "Madame Secretary." This is what happened, is that I do watch television, and I often justify my watching television by the fact that there are... that they raise serious issues, so that I can rationalize while I have since watched "Army Wives" or something. So when I was called first, and it was for "Gilmore Girls," they called up, I was just out of the office, and they said, "Would you mind if somebody played you on 'Gilmore Girls?'" And I said, "Yes, I would mind. I want to play myself." The reason I justified it was that they were trying to get the girl, Rory, to get back to college, so it's an educational thing. Anyway, it is awesome and I have a lot of fun doing that as well as "Parks and Recreation" and "Madam Secretary." My most recent appearance on "Madam Secretary" was with Secretary [Hillary] Clinton and Secretary [Colin] Powell, and I was able to get an unscripted line in, which was as we sat down with Tea Leoni, I said, "Isn't it nice when the current Secretary of State calls in her predecessors to consult?" We did it all the time.

That's fantastic. I guess I have one last question: Do you think Leslie Knope should be our next president?

You don't know. I mean, she's really feisty! You know?

I think she'll do a great job.

As long as she has my picture on her desk.

I'm sure she would. You and [former Vice President] Joe Biden next to each other!