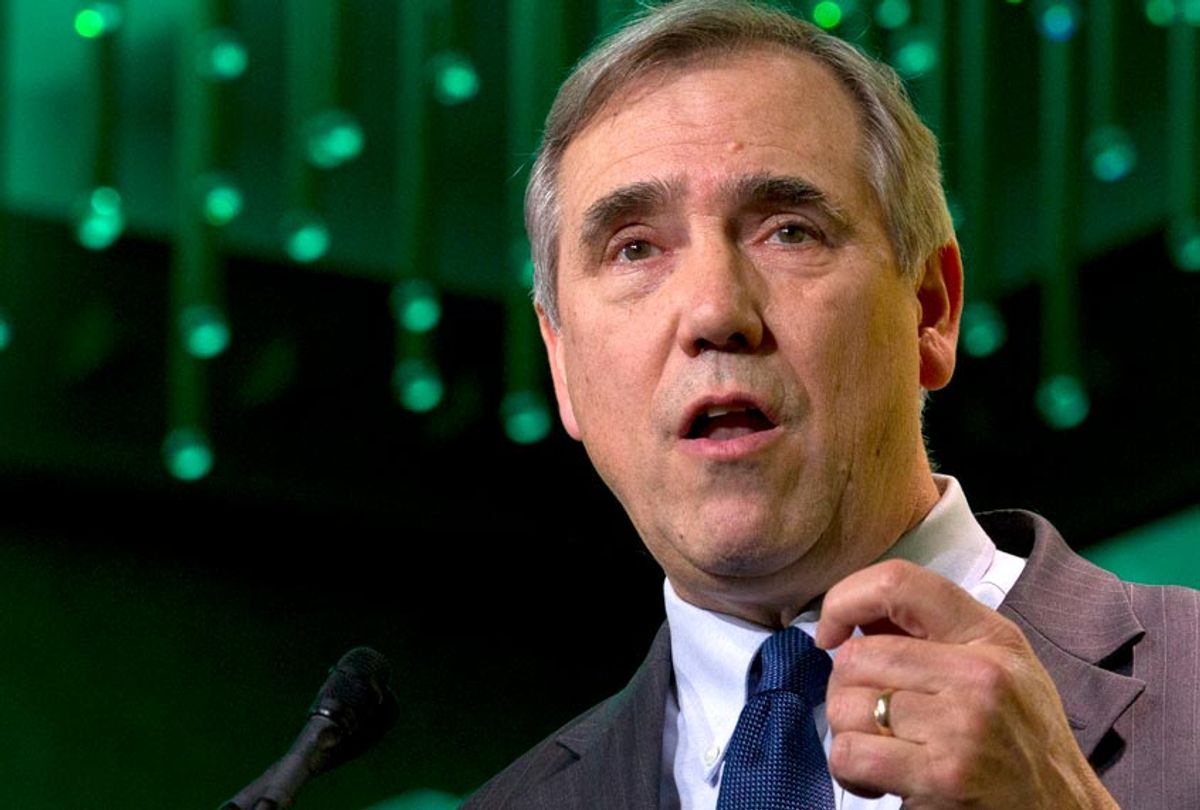 Sen. Jeff Merkley, D-Ore., has been a prominent critic of President Trump's family separation policy and its impact on children. On Tuesday Salon reached out to Merkley again to ask about the two special guests he has invited to watch Trump's State of the Union address with him in the U.S. Capitol.

They are Albertina Contreras Teletor and Yakelin Garcia Contreras, a mother and daughter who were separated at the border last year due to Trump's policies. As Teletor explained in a press release sent out by Merkley's office, "We fled our homes seeking protection from violence and a better life for my daughter. The treatment we were met with was horrifying and lamentable. We know that there are still parents separated from their kids, and we send love and strength to them. No child should be torn away from her mom or dad. We believe in an America that is better than the treatment we received, and we invite all Americans to join us in making that America a reality."

My conversation with Merkley has been lightly edited for clarity.

Senator, why did you choose that specific family? What is your connection to their stories and how did you meet them?

Well, as I reached out to immigration advocates to ask if they knew a family that would be interested in coming to the State of the Union, an advocate suggested that this family would be interested in coming. I was very struck by their story because they are representing -- here on Capitol Hill at the State of the Union in the presence of Trump -- the thousands of children who have been ripped out of their parents' arms.

Yakelin was taken away from her mother at the border. They tried to cross at a port of entry, as had been suggested by the president, but they were rebuffed because the president said one thing to the nation and a different thing to the border guards.

He said to the nation, "People should come to the ports of entry." He told the border guards, "Block people who are coming across, who are coming to assert asylum." So they were stranded on the Mexican side, and it's very, very dangerous territory. So they proceeded to cross the border and ask for asylum.

This issue of how we are treating those fleeing persecution as criminals, and the strategy of inflicting trauma on children — hurting children — in order to send a political message of deterrence, this comes from a very dark and evil place in the heart of this administration. We need to shine a very bright light on it.

I am interested that you said "a very dark and evil place in the heart of this administration." You also said that in a statement released earlier this month. I'm thinking of the Chuck Todd interview [on "Meet the Press"] with Sen. Sherrod Brown where Brown said that Trump is a racist and Todd challenged him by asking, "How can you know what's in his heart?" What makes you confident that there is evil in the heart of the Trump administration? Are these decisions indefensible from a policy standpoint?

If we go back to March 2017, the then-director of Homeland Security, John Kelly said, "We are considering as an administration separating children from their families to send a message of deterrence." He laid it straight out and it was discussed at many places in the administration, within the attorney general's office, within Homeland Security. We started to hear rumors that there was a pilot project under way. We now have the inspector general's report saying there may have been thousands of children taken away from their parents before the official implementation of child separation in May of last year.

Every time it was presented — when it was presented by John Kelly, when it was discussed in the internal papers that I released a few weeks ago, when it was announced by Attorney General Jeff Sessions — they all talked in terms of, "We are going to do this to deter individuals from seeking asylum in the United States." They understood that by treating children in this manner, by inflicting trauma on the parents and the children, they would discourage people from seeking asylum in the U.S. To hurt children as a strategy of deterrence is an evil thing to do. That is a policy that no religion in the world, no moral code, no ethical code would support, deliberately injuring children as a political strategy.

Would you say the same thing that Brown said about Trump, that this is racist?

By the way, there is an enormous lie at the heart of Trump's presentation to the public. He has painted a picture in public of a horde of rapists and murderers surging across our border that have to be stopped. But his attorney general's office and Homeland Security have been absorbed with the issue of a transition, from Mexican men who are coming to the border looking for work to families who are fleeing the drug gangs of Central America. So he has inaccurately described the immigration challenge and he developed a strategy to deter families that was based on injuring children.

It is wrong, and the American people cried out when they found out about it, and it was shut down in this initial facet quite quickly. But then the president said, "If I can't separate children from their parents, I want to lock them all up together." He put out an executive order asking for a family prison system — in America, those are called internment camps — he wanted an internment-camp strategy for migrant families. He shut down the case manager program, even though the inspector general said 100 percent of the families showed up for their hearings. He shut down what worked, he shut down what cost less, and he took the strategy of criminalizing those who are fleeing persecution and hurting the children.

What point do you hope to specifically make to Trump, America or both by having this mother and daughter at the State of the Union. What do you hope he says when he sees them?

I think that the message is best put by the little girl who is turning 12. This is her birthday today. She said if she could talk to the president she would say to him, "Stop taking the kids away from their parents because it's just too hard on the kids." The pain she experienced ... she was with other girls who were hearing that their parents were being deported. They did not know if they would ever see them again. When you come from a traumatic situation, when you make the difficult trip to try to immigrate to another country, the one thing you have that gives you stability is the hand of your parent. When that parent is ripped away from you, your foundation is ripped away.

This is why those who are experts about children say that this is so deeply damaging to them. So the president has not only pursued that policy, we have in December a system of child prisons under Trump that housed 15,000 migrant children. Fifteen thousand, up from 7,000 in June of last year. We have his efforts to expand a new child prison in Homestead. It's not a new prison, but he wants to expand it, add 1,000 beds to it. We have his new strategy of shoving families back across the border to await their asylum hearing after they have asked for asylum, which puts them at great vulnerability in the chaos on the other side of the border, where they may not have families or friends who can protect them. The important thing is to shine a light on this entire strategy of treating those fleeing persecution as criminals, rather than treating them with the respect and dignity that we would have wanted any of our ancestors to be treated with.

Would you be willing to support any version of what Trump might be willing to call a wall on the border to secure a spending deal? What is your position on that?

I am very supportive of border security, in combination with using visas in the appropriate manner in America. Every Democrat in the Senate has voted for border security. We had a bipartisan bill in 2013 that worked on many, many aspects of immigration reform. What I'm not willing to do is say, "Let's waste Americans' money on a 4th-century strategy to address a 21st-century challenge of border security." Officials at the border will tell you that they need border guards, they need centers to know when people are crossing. What they don't need is a wall that doesn't work.