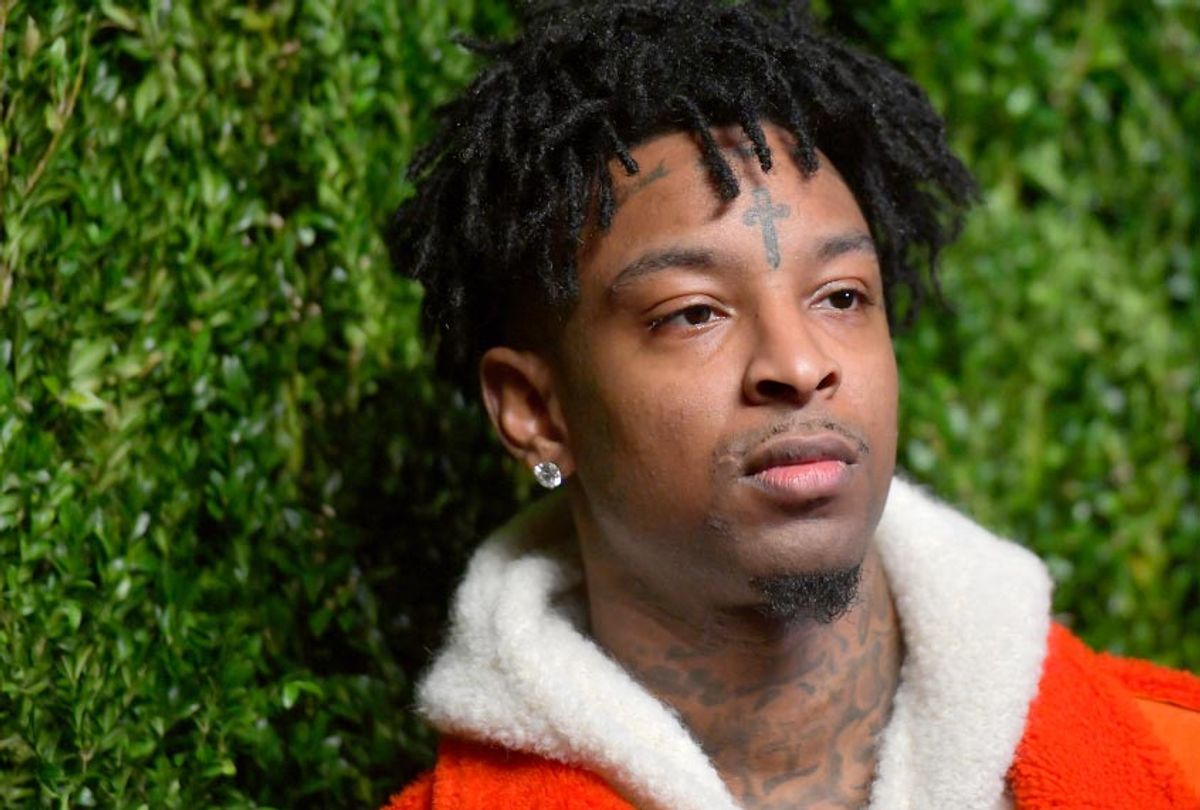 Grammy-nominated rapper 21 Savage was taken into custody by Immigration and Customs Enforcement officials on Sunday, who say he is in the country illegally. According to CNN reporter Nick Valencia, an ICE spokesman told him," His whole public persona is false. He actually came to the U.S. from the U.K. as a teen and overstayed his visa."

Commenting to the press about a detainee's "public persona"  — the rapper has long lived and is associated with the Atlanta hip hop scene — seems highly inappropriate for a government agency. It was also strategic, and successful. News of 21 Savage's immigration status echoed all over social media, and many fans ended up legitimizing ICE's statement — despite the agency's documented history of rogue and harmful actions and tactics — by expressing shock at the performer's origins.

The attendant jokes and memes reimagining 21 Savage's rap songs as delivered in a British accent were plentiful on Sunday, as was an attitude of scorn directed at him. Depicting the acclaimed musician, whose real name is She'yaa Bin Abraham-Joseph, as a liar and a fraud proved to be a fruitful distraction from the violence of detainment and deportation, as well as the facts.

An ICE spokesperson claimed that 21 Savage "initially entered the U.S. legally in July 2005, but subsequently failed to depart under the terms of his nonimmigrant visa and he became unlawfully present in the U.S. when his visa expired in July 2006. In addition to being in violation of federal immigration law, [21 Savage] was convicted on felony drug charges in October 2014 in Fulton County, Georgia."

But 21 Savage's attorneys countered in a statement that the rapper has been detained on "incorrect information about prior criminal charges and [ICE is] now refusing to release him on bond of any amount, despite the fact that he has a pending U-Visa application (as the victim of crime) with USCIS (U.S. Citizenship and Immigration Services), and that he has relief from removal available to him." The statement added that 21 Savage "does not have any criminal convictions," "never hid his immigration status from the US government" and that his address and whereabouts have been widely known since the rapper filed for the visa in 2017, raising questions about why he was just detained this past weekend.

While ICE's own claim places 21 Savage as arriving in the U.S. when he was 12 years old — meaning he had no control over his legal status — in an updated statement released Tuesday, the rapper's attorneys say that 21 Savage came to America when he was seven. This age corresponds with what the rapper's co-manager, known as Mega Meezy on Twitter, contends: that the two attended the same elementary school in Atlanta.

The new statement from his attorneys confirmed that 21 Savage was in fact born in the U.K., and that in 2005 he visited his birth country for a month before returning to the U.S. His attorneys say his legal status then expired in 2006, and "he, like almost two million other children, was left without legal status through no fault of his own" and 21 Savage applied for a visa in 2017 after becoming aware that one was required.

"Mr. Abraham-Joseph has three U.S. Citizen children, a lawful permanent resident mother and four siblings that are either US Citizens or lawful permanent residents," the statement continued. "He has exceptionally strong ties in the United States, having lived here since he was in the first grade. Because of his length of residence in the United States and his immediate relatives, Mr. Abraham-Joseph is eligible to seek Cancellation of Removal from an Immigration Judge."

So, whether 21 Savage was 12 or far younger when he arrived in the U.S., is there anything fraudulent about a rapper claiming a hometown that he has spent more than half his live in, as ICE originally alleged? Is there anything extraordinary about a person who moves somewhere as a child and then feels deeply connected to the community they have been a part of for decades?

But as civil rights attorney (and occasional contributor) Dan Canon told Salon in email, "It's not uncommon for law enforcement to engage in a PR battle in high-profile cases. There are virtually no consequences for doing so in most jurisdictions, even for public officials who tell outright lies about an accused, because the hurdles for the accused to obtain any kind of civil or criminal relief are usually too high. The Trump administration is particularly committed to fear-mongering propaganda about immigrants overall, and especially immigrants of color. This is just ICE's brand, and no one is reining them in."

The timing of his arrest, especially when paired with the publicity, can also be seen as suspicious. Just days before his arrest, 21 Savage added a line to his hit song "A Lot" about the horrors of the family separation immigration policy, from the perspective of being a father. While performing on "The Tonight Show," 21 Savage finished his last verse:

"Started from the bottom straight from the gutter, so I had to go a lil' harder/The lights was off, the gas was off, so we had to boil up the water/Been through some things so I can't imagine my kids stuck at the border/Flint still need water/People was innocent, couldn't get lawyers."

While the circumstances of 21 Savage's detainment remain murky, there seems to be no clear reason why he would be held in ICE custody without bond and while awaiting a ruling on his visa application.

"This is a civil law violation, and the continued detention of Mr. Abraham-Joseph serves no other purpose than to unnecessarily punish him and try to intimidate him into giving up his right to fight to remain in the United States," his lawyers said in a statement. "ICE can only continue to detain individuals who are a threat the community or a flight risk to not show up at their hearings. Obviously, our client is not a flight risk, as he is widely recognizable, and a prominent member of the music industry."

21 Savage is nominated for a Grammy for Record of the Year and Best Rap Performance this year, though he will likely miss the ceremony on Feb. 10 if he is forced to remain in custody. And aside from his music career, he is well-known for his charity work throughout the Atlanta area, including his annual back to school drive, and campaigns against gun violence and in support of single mothers.

"ICE's operations are almost totally opaque, even to the accused and their counsel," civil rights lawyer Dan Canon said, which speaks to the lack of information and curious timing around 21 Savage's arrest.

"Our immigration detention system is designed to keep people locked up for long periods of time by default," Canon continued. "It's standard practice to detain anyone — applicants for asylum, permanent residents, even lawful citizens — for months or years at a time, often in heinously awful conditions, on the barest of suspicions."

As Canon alludes, the treatment of 21 Savage — a wealthy, visible artist with means and a platform — is a window into the overall plight of the nearly 700,000 undocumented black people in this country.

"The hundreds of ICE assaults and detention of Black immigrants is an endemic in the United States," an online petition to free 21 Savage from ICE custody, started by Black Lives Matter co-founder Patrisse Khan-Cullors, says. "The circumstances of Mr. Abraham-Joseph's detention stand as a testament to the consistent and historically under-reported harassment and targeting of Black immigrants. The US' violent history of criminalizing Blackness intersects with its deadly legacy of detaining and deporting Black and Brown immigrants."

ICE as an institution and its tactics as a government agency have been under scrutiny for myriad reasons, with several high-profile progressive leaders calling for its abolishment. Yet, the way the ICE spokesperson attempted to weaponize 21 Savage's identity and immigration status to manipulate public opinion is telling of a larger pattern from the agency and its targeting of black people specifically.

Over the last two years, black immigrants have been vulnerable to the travel ban of predominantly Muslim countries; to the cancellation of the Temporary Protected Status program, which affects immigrants from Sudan, Haiti, El Salvador, and Honduras; and random acts of prejudice, like what happened to black American, Philadelphia-born Peter Sean Brown, who says he was nearly deported to Jamaica at ICE's request.

"America's immigration system has always treated people of color as second-class. The Trump administration's use of that system makes it all the more transparent," Canon said. "It's a more subtle form of ethnic cleansing than, say, Jackson's forced relocation of American Indians or FDR's internment of the Japanese, but it's ethnic cleansing all the same."

There is hope for 21 Savage's case to turn out favorably for him and his family. Rep. Hank Johnson, D-GA, has sent a letter to ICE on the rapper's behalf noting 21 Savage's expansive community efforts in Atlanta and Jay-Z has enlisted an attorney to help with the case. But still, 21 Savage has been separated from his children for three days and counting. Other detained immigrants are often jailed hundreds of miles away from their families, can be moved across the country with no notice, and have few visitation rights, all of which illustrates how our immigration detention system is, as Canon puts it, "unspeakably cruel."