Bullied boy named Trump sleeps through State of the Union, emerges as symbol of the resistance

Today, 11-year-old Joshua Trump wakes up as a well-rested celebrity 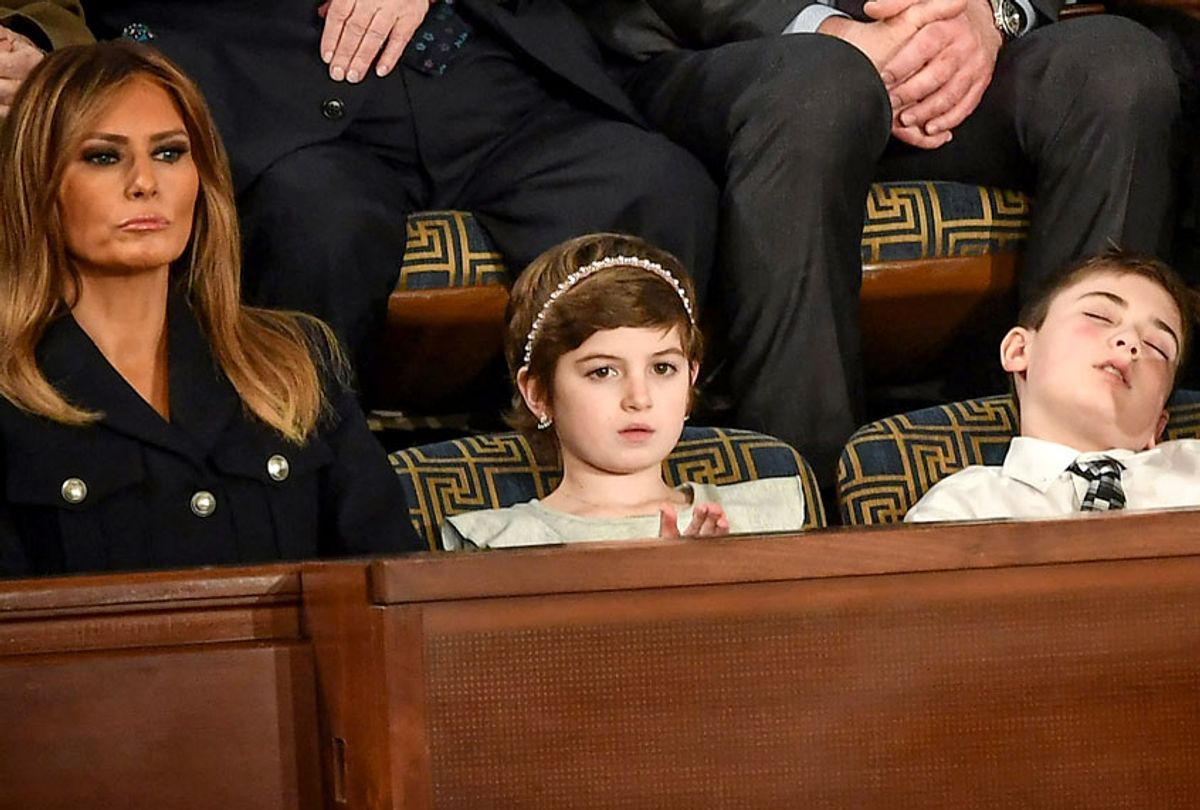 First lady Melania Trump, Grace Eline and Joshua Trump, during the State of the Union address at the US Capitol on February 5, 2019 in Washington, DC. (Getty/Mandel Ngan)
--

Joshua Trump, the 11-year-old boy who shares a last name with President Donald Trump, has had a difficult few years. In fact, students bullied the sixth grader so much because of his last name that he had to be home-schooled.

The preteen drew headlines last year after his parents said Joshua was sad all the time because of the bullying he had suffered as a result of his last name.

His parents said the bullying started for Joshua, who is not related to the president, when President Trump began running for office.

"I pulled him out of school and homeschooled him for a year," his father said.

Joshua's parents are working on getting his name legally changed. For now, his school has agreed to change his last name to his father's name, Berto, in their system.

Joshua's story found its way to the ears of the first family, who seated the 11-year-old two seats away from first lady Melania Trump at the State of the Union address on Tuesday night. It was from that coveted position that Joshua could be seen napping amid applause, flashing cameras, Nancy Pelosi's shade and Trump's renewed promise to build his $5.7 billion "wall" along the U.S.-Mexico border.

It is unclear when, exactly, Joshua fell asleep. During Trump's speech, as cameras panned to the audience at rare moments when everyone was clapping and standing, a blank space where Joshua should have been was apparent. It was then when Joshua's open-mouth snoozefest was caught by an alert photographer: Getty's Mandel Ngan. In the photo, Joshua can be seen sleeping next to Grace Eline, a 10-year-old cancer survivor who, notably, is wide awake.

Joshua's catnap was not lost on viewers at home, who considered his State of the Union snooze as either: a symbol of just how annoyed America is about a near-permanent state of partisan gridlock that literally brought the government to a record-long standstill; a hero of the anti-Trump resistance; or simply adorable.

Melania Trump has made tackling bullying, like the kind Joshua faced, one of her main priorities in the White House — the cornerstone of her "Be Best" initiative. But critics and political observers have pointed to the disconnect between her "Be Best" mission and her husband, who regularly engages in harsh and personal attacks on his critics on his favorite social media platform: Twitter.

In a biography of Joshua, the White House said the sixth-grader is a fan of science, art and history and hopes to pursue a career that has something to do with animals.

"His hero and best friend is his Uncle Cody, who serves in the United States Air Force," the White House said.

Today, a well-rested Joshua Trump wakes up as a celebrity.