Deal or no deal? With border security at a stalemate, we're headed for another shutdown

The situation hasn't changed: Republicans likely won't make a deal, because they don't really care about a wall 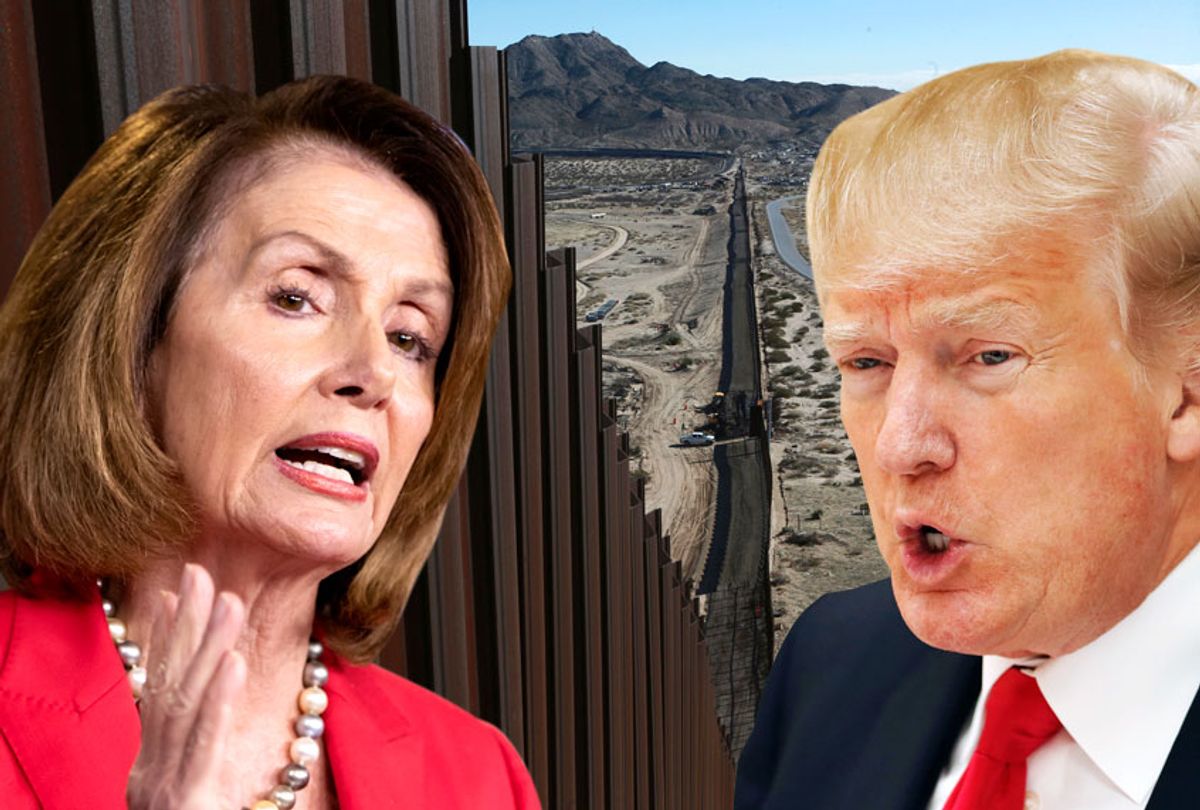 Is the United States headed for yet another government shutdown in the middle of February? Signs aren't looking good: The New York Times reports that talks on a border security bill have broken down yet again, because of Republican unwillingness to make concessions on immigration in exchange for beefed-up border security.

Despite all the Sturm und Drang of the last government shutdown, it appears that the fundamental issue causing the impasse hasn't changed: Republicans want to give Donald Trump a "wall" -- or at least some kind of border security he can pass off as a wall -- but they don't want it badly enough to work for it. They keep sitting at the bargaining table with Democrats, but refuse to offer Democrats any meaningful compromise in exchange for Trump's wall.

It's the equivalent of trying to buy a house but only offering balls of lint, wadded-up receipts and a few Canadian nickels from your pockets as the down payment. And that's all Republicans keep doing over and over: Bringing Democrats to the table and asking for a wall, without negotiating in good faith to get it.

One major source of the problem is enough to give philosophers a headache: The "problem" Trump wants to stop — a supposed crime wave coming in over the border — exists only in his head. The "solution" he offers is symbolic, with no practical value. Even if there were a crime wave (which, again, there isn't), there's no reason to believe a wall would stop it. So it's tough for congressional Republicans to work up much enthusiasm to fight for a wall, because they know it's pointless and only serves to gratify the ego of the reality TV star they made their leader.

To make it all worse, the entire discussion is being conducted in bad faith. For all Trump's lurid talk about lawlessness and violence, he and his fellow immigration hardliners don't really care about crime at all. "Crime" is just the cover story for the real agenda, which is systematically targeting as many people of color as possible for expulsion in a bid to make America whiter again, as is clearly evidenced by the administration's various efforts to limit legal immigration by people they deem to be the wrong color, profess the wrong religion or possess the wrong ethnic background.

Conservatives have resorted to trying to fake an emergency out of sheer desperation, with Trump sending troops to the border in hopes he can trick people into believing they were needed. The good news is that Democrats seem unafraid to call the Republican bluff on this. Newly-elected California Gov. Gavin Newsom is pulling back the majority of National Guard troops that were sent to the Mexican border, arguing that they may be needed to deal with real problems, not the imaginary ones sprouting from the president's head.

“The border ‘emergency’ is a manufactured crisis, and California will not be part of this political theater,” read an excerpt from Newsom's planned speech on Tuesday.

The Republican reliance on bad-faith arguments has worked for them in the past on issues ranging from climate change to starting a war in Iraq. In the era of Trump, the tactic of getting what you want by lying about why you want it seems to be failing.

Democrats are demanding that in exchange for beefed-up border security Congress will put a limit on the number of people Immigration and Customs Enforcement can detain. Such a limit would presumably force ICE to prioritize deporting those people who have actually committed crimes, instead of continuing an indiscriminate policy of major sweeps and mass deportations of people who may have lived here for years, holding jobs and paying taxes, and have committed no real crimes.

This demand puts immigration hardliners in a bind. Their official concern is "crime," but their real motivation is a desire to kick out as many Latino immigrants as possible. The proposal laid out by the Democrats is focused on crime and meets the ostensible demands of the hardliners. But it does nothing to further the mass expulsion of brown or black immigrants from Spanish-speaking countries, so the anti-immigration fringe is rejecting the plan, and coming up with more lies to justify doing so.

For his part, Trump is actively making the problem worse by continuing to harp on the wall, noting in his State of the Union that "the proper wall never got built" and promising, "I'll get it built."

Now he's heading to El Paso, Texas, where he'll hold a rally on Monday evening. He's reportedly planning to push his wall fantasy some more by falsely claiming that a border fence recently constructed along the Rio Grande in the area reduced crime in the city.

This is entirely false: There is no relationship between crime rates in El Paso and border fencing. In fact, that city has long enjoyed comparatively low crime rates, both before and after the fencing was built. No doubt Trump's rally will be another of his attempted racial provocations: El Paso is about 80 percent Hispanic and overwhelmingly Democratic. In 2016, Hillary Clinton got two and a half times as many votes there as Trump did.

Of course, provocative behavior may well garner Trump the headlines and cable news coverage he craves. His team of racial provocateurs likely hope the rally will result in images of largely Latino protesters outnumbering the white rally-goers, which can be used to terrify the aging, paranoid white people who watch Fox News. That may stir the passions of the president's racist base, but it will ultimately weaken the already weak Republican hand when it comes to any real-world border security bill.

This whole fiasco should serve as a stark reminder that all this talk about "crime" is just a cover for the true Trump agenda, which is flat-out racism. Republicans are already struggling to make a connection between border security and crime, given that crime rates are low overall and that immigrants (legal or otherwise) commit crime at lower rates than native-born Americans. Whatever happens in El Paso will be about about Trump's singular obsession with hating immigrants and his preference for symbolic gestures and racist trolling over substantive policy.

As I've argued before, there's no reason to believe that Trump really wants a resolution to this so-called problem anyway. Racist trolling, exaggerated histrionics and repeated government shutdowns are good for at least one thing: They distract the media and the public from the ever-expanding investigations into Trump's seemingly bottomless corruption.

Every time this president torpedoes his own party's efforts to strike a deal on border security, he keeps alive an issue that will reliably shift the focus away from his own likely criminality. As long as it serves Trump's interests to keep making silly demands that will never be met, he will keep on doing it. Even if he has to destroy the nation and the economy in the process.