The casual, brutal racism in Northam's medical school yearbook is not random. It reflects a long and ugly history 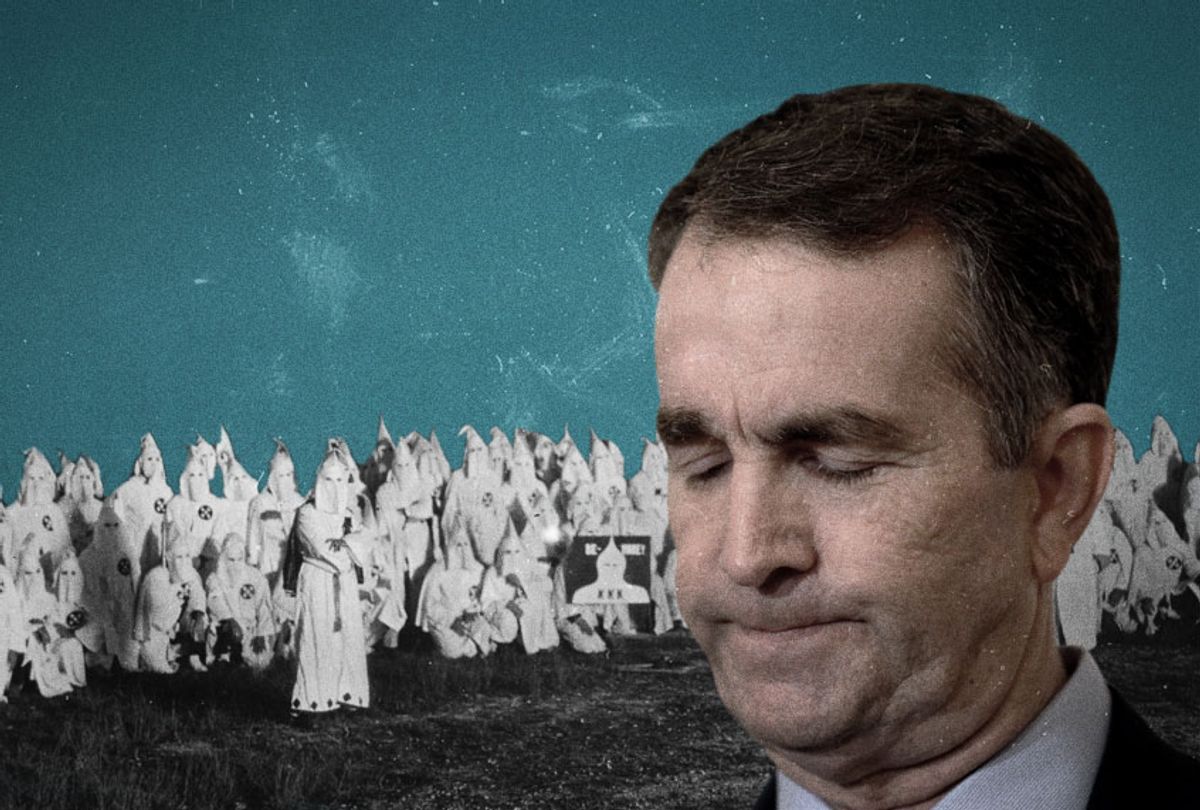 Virginia Gov. Ralph Northam's predicament has been upstaged over the last few days by that state's widening scandal, as Lt. Gov. Justin Fairfax -- who would replace Northam if the latter resigns -- now faces multiple accusations of sexual assault. Nonetheless, Northam needs to go. His confusing back-and-forth story about whether or not he engaged in blackface race minstrelsy while in medical school is disqualifying in itself, whether or not Northam is one of the men in the now-infamous photo on his 1984 yearbook page.

A governor's term is relatively short. Those are but a few years as compared to the centuries of troubled and horrible history that Northam's 1984 yearbook photo channels and legitimates.

There are monsters in Ralph Northam's yearbook. These are the other white men, those future doctors and healers, who wore blackface or Ku Klux Klan robes (which are intended to symbolize the ghosts of Confederate soldiers) as they laughed and joyfully postured. Racial terrorism and the suffering of black people seemed funny to them.

This is all another reminder that how to be black in America is to be stuck in a waking nightmare. It reflects a one-way abusive relationship, across the color line, that has existed for centuries.

There are is a whole vocabulary to describe this state of affairs.

Black people also have an internal dialogue and script they use to navigate this nightmare world. "Hands up, don't shoot." "Never forget 'The Talk.'" "Don't walk too fast, don't walk too slow." "Smile lest you be perceived as an angry black man or an angry black woman." "Be nice but not too nice lest you be perceived as 'condescending' or 'disrespectful.'" "Officer, I am unarmed. I am innocent. Please don't hurt or kill me." "Officer, I am complying with your commands. Please don't shoot me while I take my ID from my wallet."

Black people are often forced to wonder: If they are killed by police officers, or by a George Zimmerman-style vigilante, how will the news media distort their lives?

There are incantations and curses that are used against black people in this nightmare America world, against which no armor or force field can defend.

"The officer was in reasonable fear of his or her life." "Make America Great Again!" "I was scared so I had a right to Stand My Ground." "Do we know that they are really racist in their hearts?" "White economic anxiety."

Of course there is the violence -- lynchings, pogroms, prisons, ethnic cleansing, ghettoization, police brutality and thuggery, right-wing domestic terrorism, hate crimes, street vigilantes. Last but not least, there are a president and a political party who wallow in white identity politics and intentionally do harm to black people and other nonwhites as a way of maintaining control over their voters and followers.

In this horror movie for Black America you know the monster is real. You try to warn people and they do not listen. And on other days you are the protagonist Ben in George Romero's classic 1968 zombie film "Night of the Living Dead." You are fighting off ghouls -- both metaphorical and real -- and are the most reasonable and intelligent person in the room, trying to save everyone. At the end of the movie you still end up dead. Your sanity and wisdom are no match for racism and bigotry.

This all distills down to one basic fact. America is a sick society in which black people -- who through their blood and stolen labor built the country's wealth and at almost every turn have fought to improve its democracy -- are still unwanted, unsafe, intimidated and unprotected. Even in the 21st century, when a black man named Barack Obama was twice elected president.

There are so many millions of our fellow Americans who happen to be white and who are good, kind, just, fair and wonderful. Americans we call our friends, lovers, life partners, parents, brothers, sisters, relatives, neighbors, friends, teachers, compatriots and allies. Nevertheless America is a country where whiteness, historically and through to the present, is a social and political force that is not kind or good or just. This dualism constitutes one of the great existential dilemmas of the color line.

"Do no harm" is the doctor's credo and oath. But from that oath several questions follow: Do no harm to whom? Do those supposedly healing hands of Dr. Ralph Northam and the other white men in blackface and Klan robes hurt the black and brown bodies they touch?

America is a country where "medical apartheid" was and remains the norm. There are large racial disparities in health outcomes--including mortality--for most illnesses in America including cancer, hearth disease, respiratory ailments and many common and curable ailments.

Health care provided in predominantly black and brown and poor communities is substandard, compared to that provided in more affluent majority white communities.

Black women are much more likely to die from childbirth than are white women. This is a function of how racism, sexism and class inequality intersect.

Black people have historically been subjected to cruel and inhumane medical experiments by the U.S. government, hospitals and other health care providers, universities and even private citizens.

Harriet Washington explains this in her landmark book "Medical Apartheid":

But in dissecting this shameful medical apartheid, an important cause is usually neglected: the history of ethically flawed medical experimentation with African Americans. Such research has played a pivotal role in forging the fear of medicine that helps perpetuate our nation’s racial health gulf. Historically, African Americans have been subjected to exploitative, abusive involuntary experimentation at a rate far higher than other ethnic groups.

The medicalization of violence against black bodies has its origins in slavery, where black human property was often sold to medical schools for experimentation. White doctors such as J. Marion Sims, "the father of modern gynecology" committed horrific violence against black women in order to improve the health of white women. Washington discusses this as well:

Enslavement could not have existed and certainly could not have persisted without medical science. However, physicians were also dependent upon slavery, both for economic security and for the enslaved “clinical material” that fed the American medical research and medical training that bolstered physicians’ professional advancement.

An African-American woman named Henrietta Lacks had her cells harvested from her body without permission in 1951 by a physician at Johns Hopkins Hospital in Baltimore. These cells are still being used in cancer research, almost seven decades later.

In Mississippi and other parts of the country poor black women -- as well as some poor white women and other people deemed to be "imbeciles," or "unfit" or a "public nuisance" -- were sterilized without their consent. This practice continued until the 1970s.

Historically and into the present, black men are much more likely to be diagnosed with schizophrenia and other mental disorders than are whites. This disparity is rooted in stereotypes about black men and violence, and in the way mental health professionals in the U.S. and elsewhere are often used as weapons against marginalized communities.

When I look at the blackface and Ku Klux Klan images in Ralph Northam's yearbook I experience many jolts to my memory.

I think of my uncle -- an intelligent and educated man -- who never went to the doctor because of that "Tuskegee syphilis deal." One day he started to feel lightheaded and experience fainting spells. His wife dragged him to the doctor, but he was dead several weeks later, of an illness that could have been treated or prevented. Fear of doctors killed him.

I think of the other stories I have heard from black friends about relatives who were not given proper medical care by white doctors and other health care professionals. I think of my own experience several years ago, when a young white doctor presumed that because I was a black man I must therefore be poor and unintelligent and a "thug". When I confronted him about his behavior, he summoned a mangled apology, telling me he was confused because to his ears I sounded "white" and "educated" when I spoke. He said he was acting "out of habit."

These stories are not fictional. They are not isolated. They are true, and all too common.

Maybe Jordan Peele, the director of "Get Out," will make his next horror movie about those white doctors in Klan robes, both past and present, real and metaphorical. Then again, too many white audience members (and others as well) will believe that such things are fantastical and could never happen.