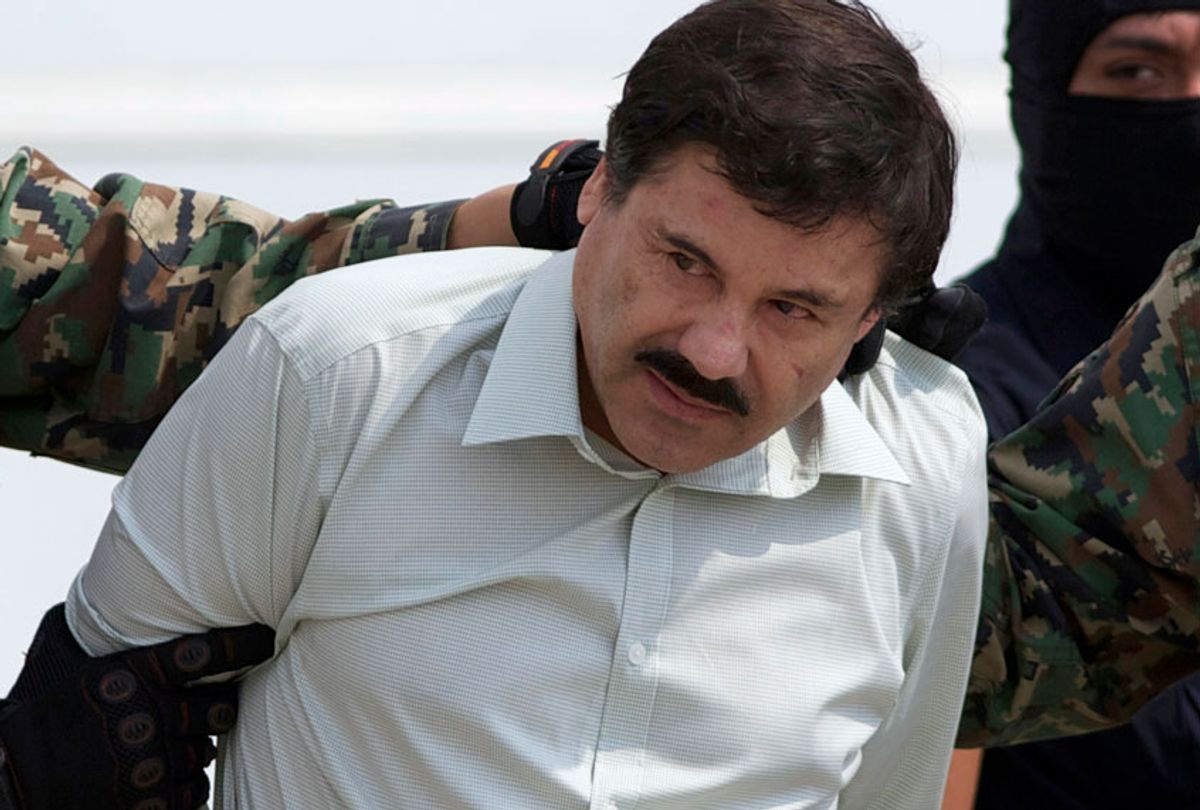 Joaquín "El Chapo" Guzmán Loera, the notorious Mexican drug lord, has been convicted on 10 criminal counts and faces a mandatory sentence of life in prison.

The 61-year-old Guzmán was found guilty of numerous federal charges after a high-security trial in New York that lasted two and a half months. Charges included distribution of cocaine and heroin, illegal firearms possession and money laundering, according to the BBC. El Chapo (which translates into "Shorty") is believed to have been the organizer of the Sinaloa drug cartel, which authorities believe was the biggest exporter of illicit drugs in the U.S. He used his wealth to become one of the most powerful men in Mexico.

The story of El Chapo's conviction could have come straight out of a movie. He was arrested in January 2016, five months after he escaped from a Mexican prison through a tunnel, and was extradited to the U.S. a year later.

The trial revealed a number of lurid details about El Chapo's life. He allegedly drugged and raped a number of girls as young as 13, referring to them as "vitamins" because he believed having sex with them improved his vitality. Witnesses also claimed to have seen him personally murder people in brutal ways, including beating two individuals who had joined a competing cartel until they were "completely like rag dolls" before shooting them in the head and burning their bodies. Another man was burned, imprisoned and buried alive in a graveyard. El Chapo even had his own cousin killed when he discovered that the man had lied about being out of town.

El Chapo's trial also revealed unflattering details about Mexican politics, including an accusation that he had given a $100 million bribe to former Mexican President Enrique Peña Nieto in order to end the manhunt against him.

"We are obviously disappointed with the jury's verdict in the trial of Joaquín Guzmán Loera but are respectful of the process and the jury's decision," defense attorney Eduardo Balarezo said, according to CNN. "We were faced with extraordinary and unprecedented obstacles in defending Joaquín ..."

This respect for the jury's process did not extend to the witnesses cooperating with American prosecutors, whose characters were repeatedly attacked by the defense team during the trial. Defense attorney Jeffrey Lichtman claimed that these witnesses had "lied every day of their lives — their miserable, selfish lives."

One person who was clearly pleased with the outcome was U.S. District Judge Brian Cogan, who told the jury that their behavior on the panel "made me very proud to be an American."

El Chapo's trial also had another implication for American politics — to many observers, it illustrated why President Trump's proposed border wall would be ineffective in stopping the drug trade. As law professor Luis Gómez Romero explained in an article republished by Salon:

A high-tech border fence constructed in Arizona long before Trump’s inauguration has proven virtually useless in stopping drugs from crossing into the U.S.: Mexican smugglers just use a catapult to fling hundred-pound bales of marijuana over to the American side.

“We’ve got the best fence money can buy,” former DEA chief Michael Brown said to The New York Times in 2012, “and they counter us with a 2,500-year-old technology.”

Then there’s the other ancient technology perfected by Guzmán: the tunnel.

Officials have discovered about 180 cleverly disguised illicit passages under the U.S.-Mexico border. Many, like the one Guzmán used to escape prison, are equipped with electricity, ventilation and elevators.

Trump has admitted that anyone could use “a rope” to climb over his wall, but believes that more border guards and drone technology would prevent infiltration.