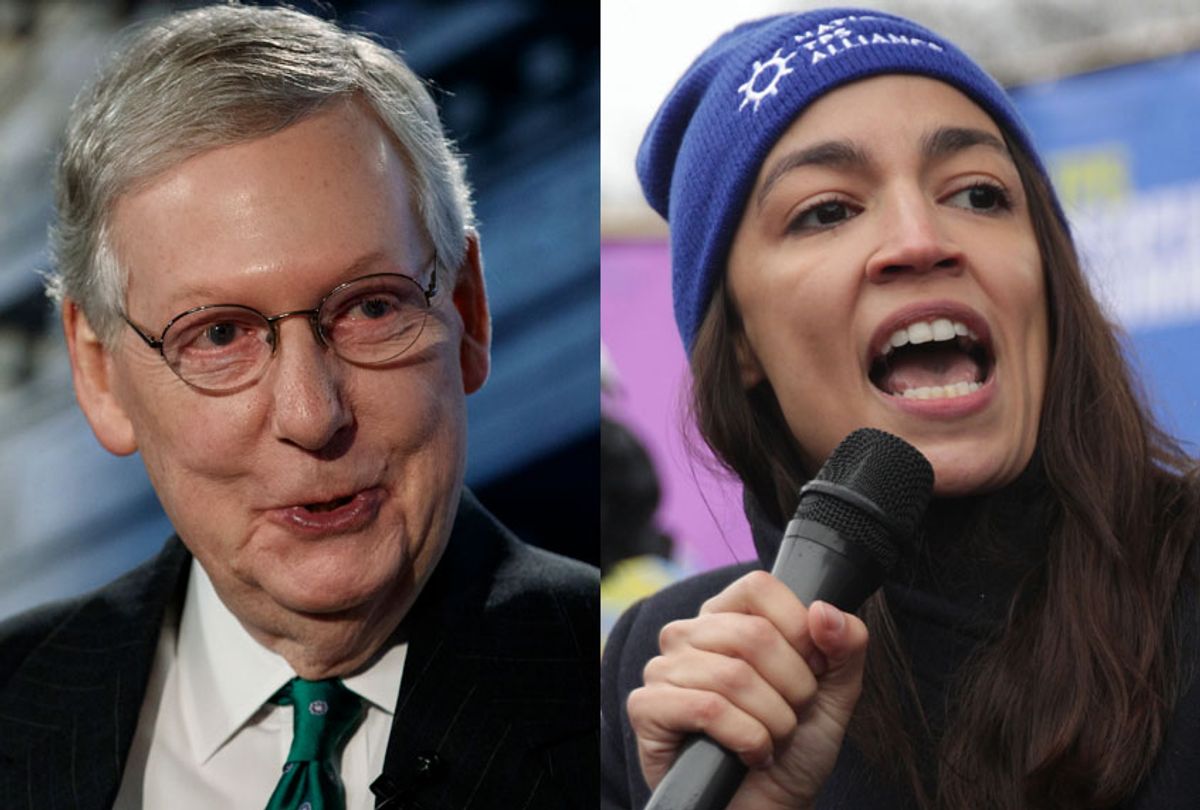 Senate Majority Leader Mitch McConnell plans on bringing the so-called Green New Deal to a vote, presumably in the hope of forcing the numerous Senate Democrats who will potentially be their party's 2020 presidential nominee to stake out a position on the controversial set of policy proposals.

"I've noted with great interest the Green New Deal," McConnell told reporters at a press conference on Tuesday. "And we're going to be voting on that in the Senate. Give everybody an opportunity to go on record and see how they feel about the Green New Deal."

The Green New Deal has already been met with controversy within the Democratic Party. After Rep. Alexandria Ocasio-Cortez, D-N.Y., and Sen. Ed Markey, D-Mass., released a Green New Deal blueprint last week, House Speaker Nancy Pelosi distanced herself from it by saying that "it will be one of several or maybe many suggestions that we receive. The green dream or whatever they call it, nobody knows what it is, but they’re for it right?"

Similarly presidential prospect Sen. Sherrod Brown, D-Ohio, told a breakfast sponsored by the Christian Science Monitor that "I don’t need to co-sponsor every bill that others think they need to co-sponsor to show my progressive politics. I want to get something done for people now."

In a since-deleted blog post from Ocasio-Cortez's office, the New York congresswoman described the Green New Deal as containing the following provisions:

It guarantees to everyone:

The Green New Deal also promises to prioritize fighting climate change, pollution and other threats to the environment that risk undermining the sustainability of life on this planet.

It is unclear how Democratic senators will vote on the possibility of a Green New Deal once it is brought to the Senate floor. A number of Democrats in the Senate have either already declared their presidential candidacies or are expected to do so, including Sens. Cory Booker of New Jersey, Sherrod Brown of Ohio, Kirsten Gillibrand of New York, Kamala Harris of California and Amy Klobuchar of Minnesota. Sen. Bernie Sanders of Vermont, though technically an independent, has also said that he might run for president in 2020.

One possible hint as to how they might vote comes from this report by CNBC:

Democratic liberals, including all of the senators currently running for president, have come out in support of the legislation, which calls for generating 100 percent of the nation's power from renewable sources within 10 years. Scientists have said that dramatic, immediate action is necessary to stem the catastrophic effects of climate change.

Democratic moderates have been less than enthusiastic about the proposal. House Speaker Nancy Pelosi derisively referred to the House version of the bill as a "green dream," while only 11 of the 47 senators who caucus with the Democrats have signed on to sponsor the bill.