A valentine from "American Gods" goddess of love: Permission to own your power

Salon talks to Yetide Badaki, the goddess of love, about the new season of "American Gods" and the power of Bilquis 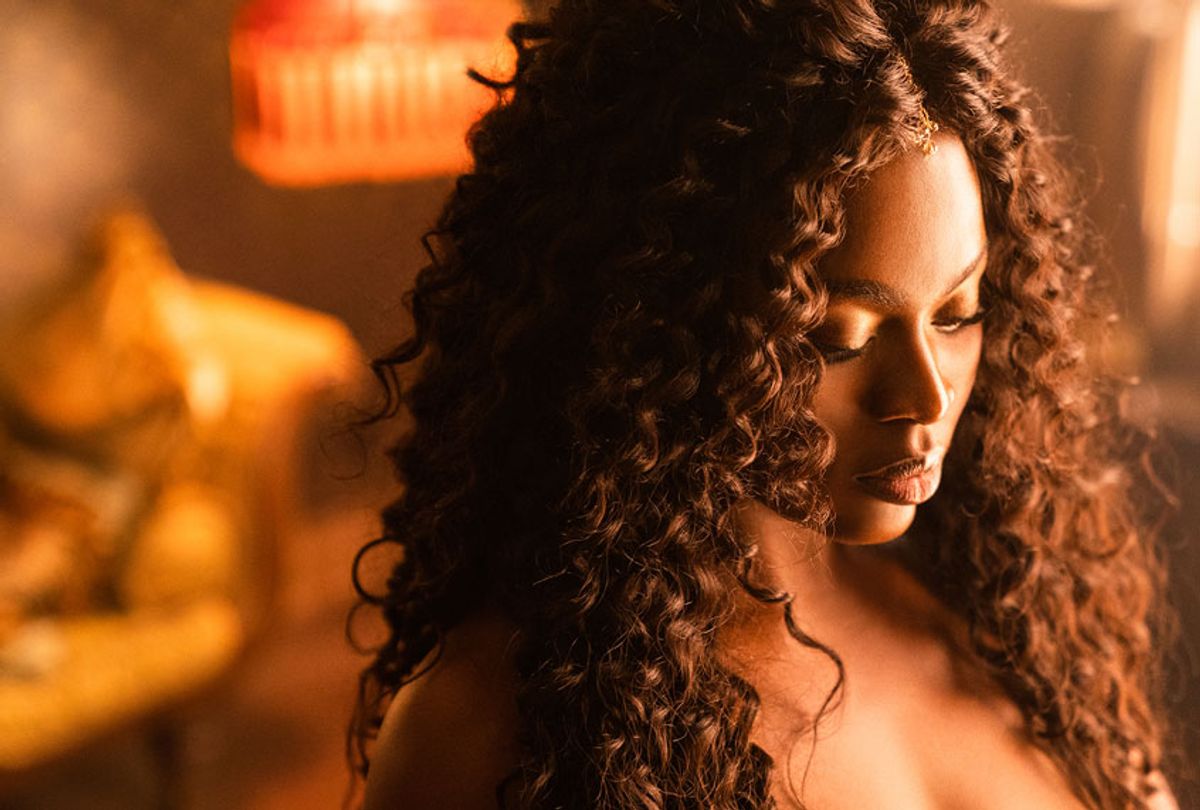 When the goddess of love appears before me, the color that announces her is not pink or red, but yellow. The shade saturates the blazer Yetide Badaki is wearing, a bright and warm “ta-dah!” against the rest of her dark outfit. It sets off the gloss of each ringlet on the riot of curls and makes her already bright smile leap forth, a herald to the hug she offers in greeting. Of course, one accepts.

The pop of citron, she explains, is an example what she describes as giving herself permission to be bold, an unexpected statement from a woman best known to “American Gods” worshipers as Bilquis, a deity who by default is the most attractive person in any room she’s in.  Yellow, in the framework of color psychology, is the most visible hue on the spectrum. It evokes happiness and optimism, the heart of flowers and sunshine.

No actor is their character regardless of how closely we associate the real person with the part she plays. And Badaki opens our conversation by revealing this tidbit of self-discovery: in many regards, she’s been in retreat. Content to dim her glow. She noticed this, she says, while watching episodes of “Pose” or “RuPaul’s Drag Race.”

“I would be pulled in and I had to dissect it of course, because I'm a geek. I'm like, ‘Why do I feel like this? Why is it when RuPaul walks down the runway and I go, 'Yes mother!' What is that?’" she said in a recent sit down in Pasadena. “I realized what happened was I was getting permission to not be small.”

As she continues, the emotion in her voice surges.  “Right now, are living through such a time of . . . Oh boy, didn't mean to get emotional. But as women, as immigrants, as I mean, my heart is out there with everyone in front of the White House right now with the temporary protected status individuals. There's so much of being told, like that you are ‘less than.’ So I'm really trying to embrace, even if it's just color, that there is power within and that's OK.”

A word about Bilquis before going further: Her better-known moniker is the Queen of Sheba, a ruler who appears in Judeo-Christian texts as well as the Koran and Ethiopian legends. Depending on the source, she’s an otherworldly temptress or a stunning dynastic ruler. In Neil Gaiman’s book, Bilquis is an avatar for all love goddesses, although she only appears briefly and in the guise of a sex worker.

In Starz’s lushly rendered series, which returns Sunday, March 10, Badaki is empowered by Gaiman (as well as executive producers Bryan Fuller and Michael Green, who exited the production after season 1) to expand the character in ways that make her a major player.

So it was that the Nigerian-born performer, a naturalized citizen of the U.S. who proudly identifies herself as a geek (and a longtime fan of Gaiman’s literary works as part of that) received her widest introduction to audiences early in the first season. In her introductory scene she meets up with a lonely widower, gives him the best sex of his life,  and, in the process of doing so, completely absorbs him, body and soul, through her vagina.

It’s a curious interpretation of a love goddess blessing, particularly in an age when romance is expected to be enabled by technology. Bilquis is part of the pantheon of Old Gods led by Mr. Wednesday, aka Odin. In the series, these mostly-discarded deities are going to war with the New Gods, a threatening force led by a deity known as Mr. World and given renewed force by an entity known as Technical Boy, the personification of the Internet.

“In the way that we see Bilquis and love in this season, we get to see a god that actually does listen and does recognize, acknowledge, the fact that we do in turn need the other,” she observed. “A lot of the other gods do not like to be reminded of the fact that we need the worship, or the attention, of the everyday person in order to continue.

“So I like the fact that Bilquis is aware of being a part of a circuit,” she continued. “What I also love about the way that we see Bilquis and love in this season is that love is not passive. I think that's a very, I believe, a manufactured idea. That, oh! Something is loving, so it's passive and it's moldable and . . .  No. We have so many examples of history of where love was in fact the powerful force that moved something forward.”

Viewed in the context of an age where the new standard for the single and searching is to seek partners by swiping left and right, eschewing the inconvenient trappings of romance, the visual of a cosmically powerful entity representing love completely absorbing people seems cynical, nearly vampiric.

Badaki doesn’t deny this. “What I find fascinating about it too is that I always . . . people would say, 'Oh! You know that person came to an end.' But did they? They live in eternal bliss.”

The smile breaks into the conversation again. “It's funny because you do see it from your character's viewpoint. And from Bilquis's viewpoint, she's offering a gift. Even to those that some may deem undeserving in some way. She's ending their existence in this particular phase, but she's still giving them the opportunity for eternal bliss.”

Although the visual of Badaki’s performance provides one of the most memorable "American Gods" images, initially her role in this universe was largely silent. This changes with the second season when the goddess of love is, quite literally, trapped in the middle of a brewing war to end all wars.

“For season two, it was kind of like, ‘OK, now let's have her talk,’” said Gaiman who, like Badaki, sat for interviews as part of the Television Critics Association’s Winter Press Tour. “You know, she's not a superhero with a magic vagina. She's the love goddess, and she's caught between the good and the bad, or not that — the old and new. And what her own side consists of is something that we're going to find out.”

“And one of the things that was so thrilling for me was going, OK, l don't know if she can do this,” he continued, explaining that until season 2, Badaki had largely played her role without much dialogue. “But she's amazing. She is absolutely . . . unashamed is not even the right word, because she's proud of who she is and what she is. And she's, you know, a 6,000-year-old love goddess who is hanging on and is now getting back to who she was and doing some of that with the aid of technology.”

Badaki echoed this, pointing out the broader meaning  of love as depicted via Bilquis. “'She's being absolutely truthful. She's not promising any side. And she's saying, 'Evolve or die. We need to figure out what serves us all in order for all of us to survive.'"

To a segment of viewers, however, the fact that Badaki, a black woman with a dark complexion, plays this role holds a higher significance. In discussions about social and cultural structures that still rule today’s world, affecting how women are treated in the workforce and in the realm of courtship and dating, Badaki’s sensual representation of black female divinity, even in Bilquis’ scariest moments, is impactful enough to have earned her a fervent new fanbase. (One that stands apart, I suspect, from those watching her on “This Is Us,” where she appears in a recurring role.)

“What really resonated with me was meeting women, meeting — no, people. You meet people and they say, ‘That gave me permission to own a part of myself.’ To find the .  .”

She pauses for a moment, finding the words.

“I hesitate to use the term 'beauty,' because it's not about a surface thing, but beauty in the idea that there is good and power that we sometimes feel that we need to suppress. And it has been inspiring to meet people who say that they felt they were given permission with Bilquis to let that part of them shine.”

Badaki also appreciates the conversations it sparked, specifically about the term that’s driving her: permission. "A lot of the things that I believe impact us negatively are able to occur because they are pushed into silence by shame," she said. "Shame is a powerful silencer, and it has been a joy to be able to be part of a discussion that shines a light in a way that —”

She stops short, in a way that tells me she’s making a split-second decision.

“OK, I don't know how much time we have, but I'll share this little anecdote.

“I mean, seeing a powerful woman, a woman own her sexuality on top of it, that's not something we were really that familiar with before," she said. "And I saw how many times that is something that is used against us, to try and shame and silence us. And one example was, I got an email the other day. And the title was a password that I used to use.”

Badaki opened the message and discovered it was from a blackmailer. “It says, ‘Hi. I've hacked into your phone and your laptop and your cameras and just to keep it short, I have intimate footage of you and if you don't send this much [money] here, I'll send it to all your friends and family.’”

Her response to this horror, descended into her inbox from nowhere? “I start laughing. I played the goddess of love. I consumed a man through the crown on the other side. What do you have that you're going to send to my friends and family?

“And in as much as I laughed, I felt such power in that moment.”