MSNBC's Joe Scarborough rips former party: "The hypocrisy of the Republicans is beyond breathtaking" 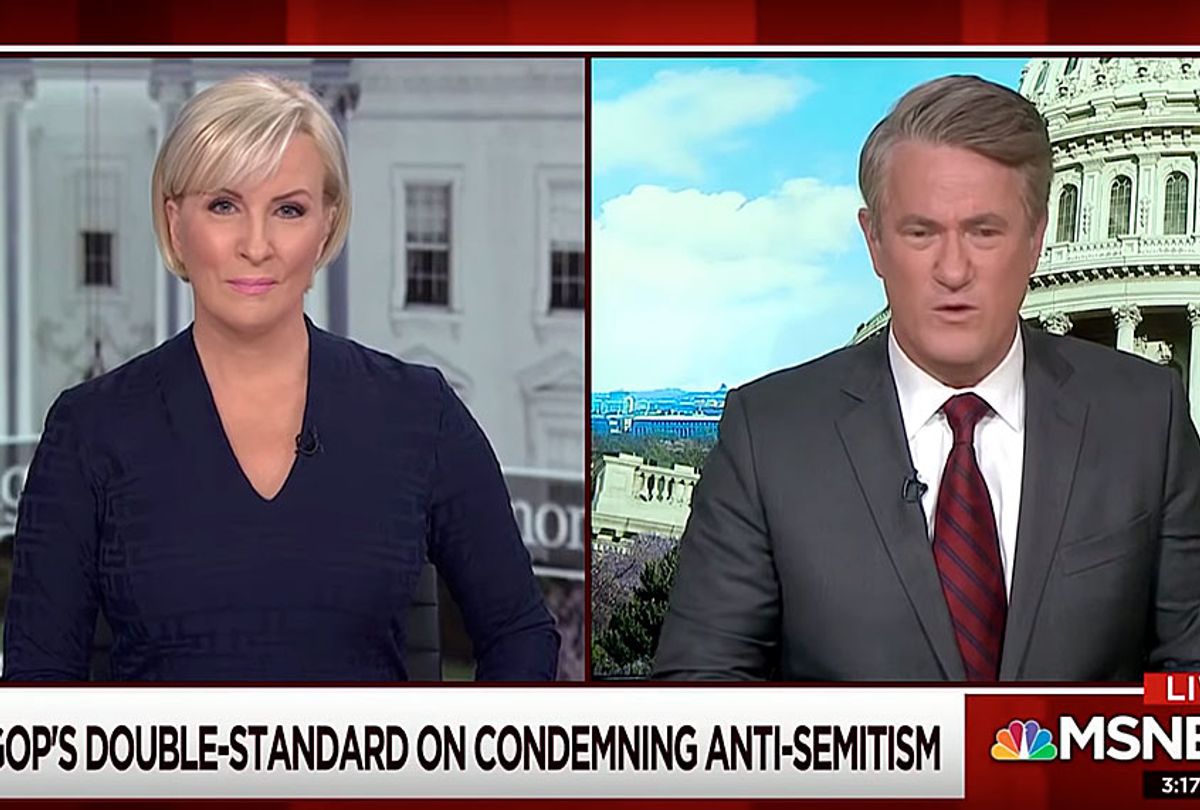 MSNBC’s Joe Scarborough hammered Republicans for pretending to care about bigotry after nominating the most prominent “birther” as their presidential candidate to succeed Barack Obama.

The “Morning Joe” host has been strongly criticizing GOP lawmakers for calling out allegedly anti-Semitic comments by Rep. Ilhan Omar (D-MN), saying that Republicans have not taken a stand against President Donald Trump’s bigoted statements and actions.

“The hypocrisy of the Republicans is beyond breathtaking,” Scarborough said. “We can do this in sequential order. In early December 2015 Donald Trump talked about a Muslim ban, banning over 1.5 billion people from entering this country because of the god they worship — pure bigotry, unconstitutional, a rank violation of the First Amendment. Then he talked about a Muslim registry, Republicans said nothing.”

“Then he claimed that he didn’t know who David Duke was or who the Ku Klux Klan were or what they did, on the Sunday before Super Tuesday,” Scarborough said. “Republicans said nothing. Then he attacked an Indiana judge born in America, because his parents were born in Mexico, and he actually said that that American judge couldn’t be fair and do his job fairly because there was Hispanic blood in him. Republicans said nothing.”

“Then he starts putting Star of Davids over dollars and Hillary Clinton’s image, Republicans say nothing,” Scarborough continued. “Kevin McCarthy suggesting that Jews are buying the midterm elections by putting up pictures of George Soros.”

“Then during the caravans, Republican congressmen saying that Jews like George Soros were funding the caravan in hopes of stirring up their base,” he added. “The anti-Semitism, I mean, I haven’t even touched on Charlottesville! There are so many this Republican majority and the House of Representatives and this Republican president have used racism and bigotry and, of course, the original sin was Donald Trump’s birtherism, and yet they shamelessly attack one horrible anti-Semitic tweet, which should be condemned, but they are the last people to throw stones because they don’t live in a glass house, they live in a glass tower that has the words Trump etched in crystal all over it."