"We have a crisis at our southern border, but no crisis justifies violating the Constitution," Marco Rubio says 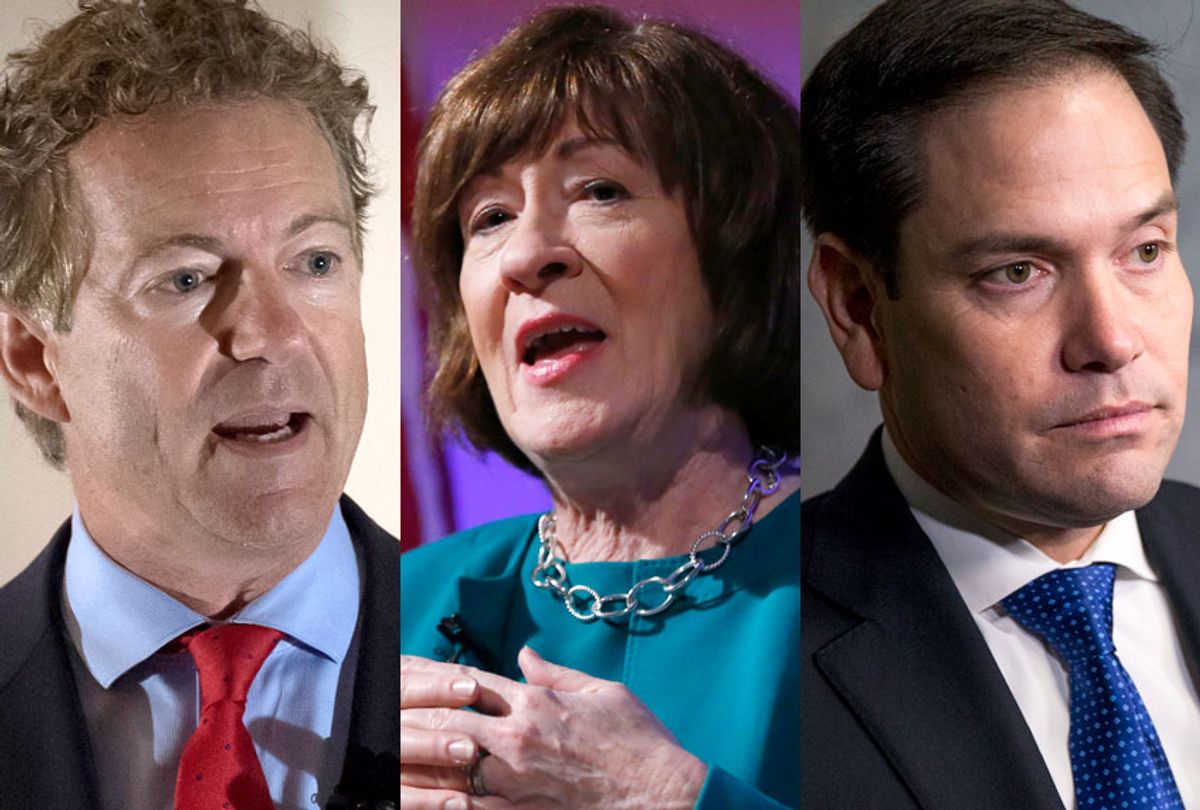 Sen. Marco Rubio, R-Fla., joined the chorus of Republican lawmakers who have spoken out against President Donald Trump's move to declare a national emergency at the nation's southwestern border, calling it a violation of the U.S. Constitution.

"We have a crisis at our southern border, but no crisis justifies violating the Constitution," Rubio said in a statement, arguing that Trump's declaration could enable "a future president" to "use this exact same tactic to impose the Green New Deal,"a Democratic-backed economic and environmental initiative that aims to eliminate carbon emissions within 12 years.

"I will wait to see what statutory or constitutional power the resident relies on to justify such a declaration before making any definitive statement," Rubio continued. "But I am skeptical it will be something I can support."

The White House announced on Thursday afternoon that it would declare a national emergency at the border. The decision came after the commander-in-chief said he was not pleased with a bipartisan agreement reached by Congress earlier this week to avert a second government shutdown over border security and immigration.

"I can't say I'm happy. I can't say I'm thrilled," Trump told reporters as in response to the deal reached by Democrats and Republicans, which provides him with a fraction of the funds he has requested for his wall along the southern border. It includes $1.375 billion for 55 miles of new border fences — a snippet of the $5.7 billion Trump had previously demanded for the construction of 200 miles of walls along the southwestern border.

"President Trump will sign the government funding bill, and as he has stated before, he will also take other executive action - including a national emergency - to ensure we stop the national security and humanitarian crisis at the border," White House press secretary Sarah Sanders said in a statement. "The pPresident is once again delivering on his promise to build the wall, protect the border and secure our great country."

Declaring a national emergency would allow Trump to start constructing his wall immediately by circumventing the legislative approval required from Congress. Trump is reportedly seeking to redirect funds from the Treasury Department's drug forfeiture fund, according to NBC News. Republicans lawmakers and White House officials, including Jared Kushner, have indicated they would prefer Trump not rely on such an option to build the wall because of the legal challenges that would follow.

Sen. Rand Paul, R-Ky., also expressed his discontent with the president's plan, tweeting on Thursday that he was "disappointed" both with Congress' deal on border security spending – which he slammed as "massive, bloated, secretive" – and "with the president’s intention to declare an emergency to build a wall."

"I, too, want stronger border security, including a wall in some areas," Paul wrote. "But how we do things matters."

Rubio and Paul joined a handful of Republican lawmakers who had already expressed concern over Trump's plan. Sen. John Cornyn, who represents Texas, a state that Trump has claimed is being overrun with drugs, crime and human trafficking caused by migrants seeking illegal entry.

"My concerns about an emergency declaration were the precedent it would establish," he said, according to NPR. "I also thought it would not be a practical solution, because there would be a lawsuit filed immediately. And the money would presumably be balled up associated with that litigation. I thought there were other, better alternatives."

Sen. Susan Collins, who has consistently attempted to position herself as a moderate Republican, said in a statement Thursday that "declaring a national emergency would be a mistake." Collins, who is up for re-election in 2020, argued that the National Emergencies Act, which Trump is likely to invoke, was only "intended to apply to major natural disasters or catastrophic events, such as the attacks on our country."

Sen. Lindsey Graham, R-S.C., warned on Monday that there could be a "war" among Republicans should Trump declare a national emergency at the nation's southern border.

"It seems to me that he's gonna have to go it alone," Graham said. "But there could be a war within the Republican Party over the wall."

In a January appearance on Fox News, Sen. Thom Tillis, R-N.C., stated that he hates the idea of Trump declaring a national emergency at the border.

"I hate the idea of an emergency," he said. "I always worry about that abuse with future presidents. The president is right to say the billions of doses of drugs that are coming across the border every year and the tens of thousands of people that are dying of overdoses is a crisis. He’s also right to say that weapons, human trafficking – there’s a humanitarian crisis. There's a health crisis. There's a number of things that you could potentially use to justify it. I hope he doesn't go that far."