Shutdown unlikely? Trump says he is not "happy" about the bipartisan agreement on border security

"I can't say I'm thrilled," Trump told reporters as he met with members of his Cabinet at the White House 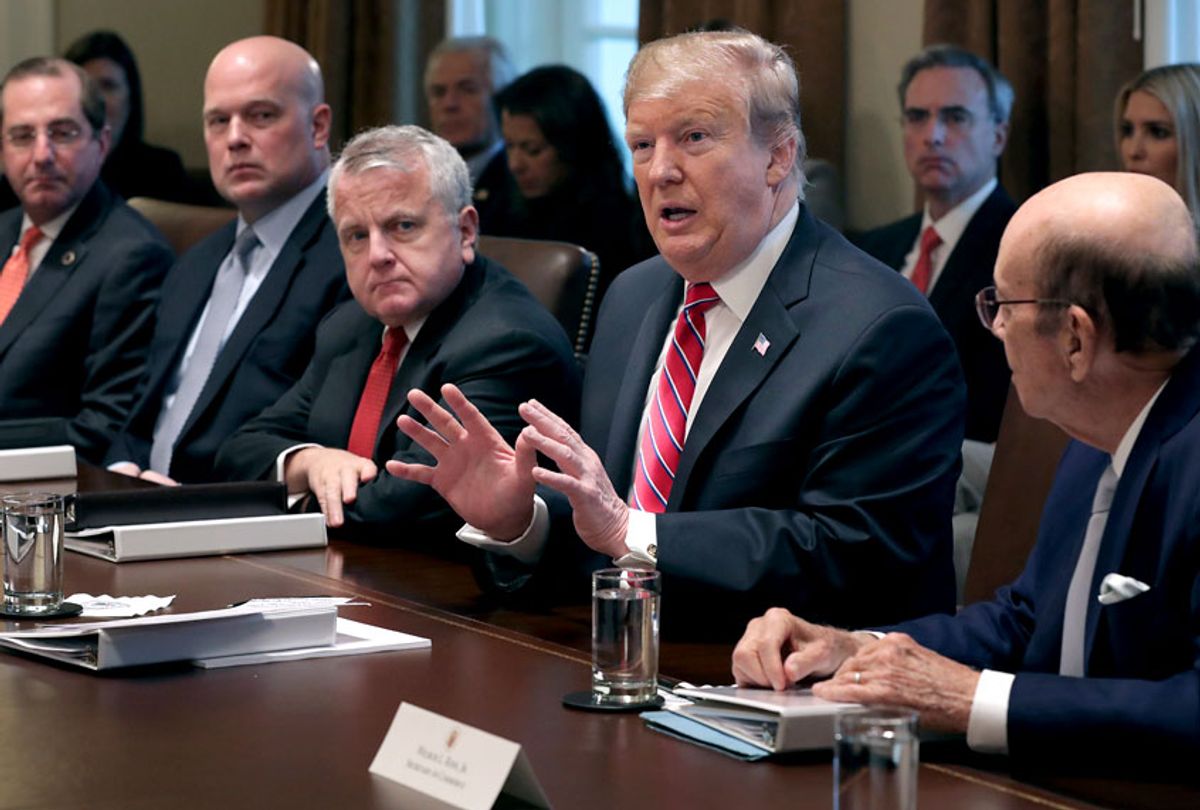 Donald Trump talks to reporters during a meeting with members of his cabinet, including Health and Human Services Secretary Alex Azar, acting Attorney General Matthew Whitaker and Commerce Secretary Wilbur Ross, in the Cabinet Room at the White House February 12, 2019 in Washington, DC. (Getty/Chip Somodevilla)
--

President Donald Trump said Tuesday that he is not pleased with a bipartisan agreement reached by Congress in "principle" to avert a second government shutdown over border security and immigration.

"I can't say I'm happy. I can't say I'm thrilled," Trump told reporters as he met with members of his Cabinet at the White House one day after Democrats and Republicans reached a deal giving Trump a fraction of the funds he has requested for his wall along the U.S.-Mexico border.

At the same time, Trump said another government shutdown looks unlikely. "If you did have it, it's the Democrats fault," he added. "I would hope that there won’t be a shutdown. I am extremely unhappy with what the Democrats have given us."

Trump's comments cast doubt on the prospects of reaching a compromise, which must pass the House and Senate and get signed by the president before the clock strikes midnight Friday. If Congress and Trump do not get a spending bill signed, large portions of the federal government will run out of money and shut down just three weeks after the the longest budget impasse in U.S. history ended.

The agreement includes $1.375 billion for 55 miles of new border fences – a figure that Fox News host Sean Hannity suggested was peanuts compared to the $5.7 billion Trump had previously demanded for the construction of 200 miles of walls along the southern border.  Hannity slammed the deal as "garbage" on his show Monday night and warned that any Republican supporting the compromise would "have to explain" his or her position.

Other conservatives attacked the deal, claiming that it fails to fulfill a central tenant of Trump's presidential campaign: Trump repeatedly promised that Mexico would fund the across the 2016 trail. "Trump talks a good game on the border wall but it's increasingly clear he's afraid to fight for it," author and commentator Ann Coulter tweeted Tuesday. "Call this his 'Yellow New Deal.'"

On CNN, former Republican congressman Charlie Dent said, "You have to say the president lost."

"He lost because he set an unrealistic expectation. He talked about a wall and Mexico paying for – 2,000 miles. He has walked it back. Now that we are having a serious conversation, he is going to get 700 miles, which is what I supported when I was a co-sponsor of the Secure Fences Act," Dent added Tuesday. "It was done with expert consultation. He is doing the things that need to be done, but is not going to get this pie in the sky wall that he foolishly promised during the campaign."

In past negotiations, Trump bowed to conservative backlash over funding. During the first round of negotiations in December, after right-wing pundit Ann Coulter said she would not vote for Trump in 2020 if he could not secure funds for the border wall he promised, Trump changed course and told congressional Republicans that he would not sign a spending bill that did not include money for his wall.

This time around, however, it appears lawmakers from both parties are determined to avoid another shutdown after a 35-day budget impasse forced hundreds of thousands of federal workers to go without pay until Trump reopened the government with a short-term spending bill that gave Congress until Feb. 15 to pitch a new deal. Senate Majority Leader Mitch McConnell (R-Ky.) welcomed the agreement Tuesday.

"I look forward to reviewing the full text as soon as possible and hope the Senate can act on this legislation in short order," McConnell said on the Senate floor.

Trump has renewed his threat of declaring a national emergency on the southern border, which would allow him to start constructing his wall immediately by redirecting taxpayer money from other projects — without approval from Congress. Republicans lawmakers and White House officials, including Jared Kushner, have indicated they would prefer Trump not to rely on such an option to build the wall because of the legal challenges that would follow.

"I'm considering everything," Trump said at the Cabinet meeting Tuesday.

"Trump's reaction leave the deal's fate in doubt, but negotiators said that, with the president’s assent, there would be time for the legislation to pass the House and Senate and be signed ahead of the Friday midnight deadline when large portions of the government, including the Department of Homeland Security, will run out of funding and begin to shut down.

Negotiators said the deal would fund all government operations through the end of September, potentially removing any more shutdown threats for the remainder of the fiscal year."