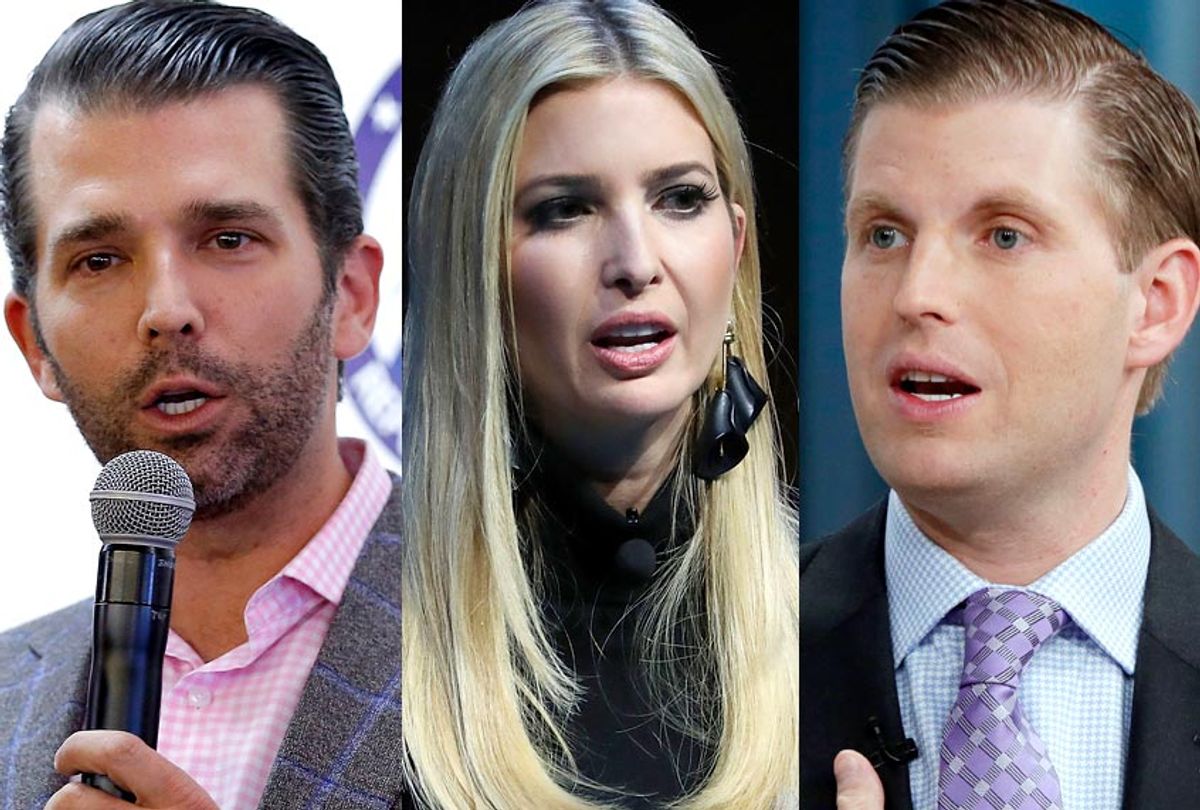 The company, which the president still owns but is currently being run by his sons Donald Jr. and Eric, announced plans to build as many as 30 hotels under the lower-cost brands Scion and American Idea at a reception at Trump Tower soon after the president's inauguration.

Despite claims that the company was working on dozens of deals, not a single hotel has opened under the would-be new brands. Now Trump's children have announced that plans to move forward have been scrapped for the time being.

“We live in a climate where everything will be used against us, whether by the fake news or by Democrats who are only interested in Presidential harassment and wasting everyone’s time, barraging us with nonsense letters,” Eric Trump said in a statement Thursday. “We already have the greatest properties in the world and if we have to slow down our growth for the time being, we are happy to do it.”

Only one hotel was actually in the works, a 17-acre, 100-room hotel and conference center in Cleveland, Mississippi, through a partnership with local developers Dinesh and Suresh Chawla. That project was expected to cost the Trump Organization $20 million before they pulled out this week.

The New York Times reports that the company also faced local opposition for possible hotel deals in cities like Dallas and St. Louis, where potential partners were “scared away by the prospect of intense media coverage and legal and financial vetting.”

But more than future developments or tentative deals are at risk: The Trump Organization has repeatedly lost branding and management contracts with hotels in New York and overseas. The company was paid to have its name removed from two hotels in New York and Toronto. The majority owner of a Trump hotel in Panama ordered the the Trump name to be pulled off the entrance sign with a crowbar.

Trump is also facing multiple lawsuits accusing him of illegally profiting from the presidency. Two lawsuits filed by the attorneys general of Maryland and the District of Columbia allege that Trump is in violation of the Constitution’s emoluments clause, which prohibits gifts or payments from foreign governments. Lobbyists for countries like Saudi Arabia have bought up hundreds of rooms at Trump’s Washington hotel while doing business with the administration, The Post reported.

Earlier this month, Sen. Elizabeth Warren, D-Mass., and Rep. Pramila Jayapal, D-Wash., demanded answers from the Trump Organization on why T-Mobile executives booked more than 50 rooms at the hotel while asking the Trump administration to approve a merger with Sprint.

The Trump Organization has also begun to purge undocumented workers from at least five of its golf properties after it was reported that federal and local investigators are probing the company’s hiring of such workers.

Trump’s longtime former lawyer, Michael Cohen, who also served as an executive at the Trump Organization, is expected to testify before three different congressional committees about a wide range of topics before he heads to prison on numerous federal charges.

The Trump Organization has also taken a hit from a self-imposed ban on foreign developments. During the campaign, Trump bragged to the New York Times that his company was working on 120 deals in countries like Saudi Arabia, China and Israel but any such deals were scrapped after he won.

Even Trump has admitted that becoming president has cost him a lot of money, an ironic twist for a candidate who was accused of trying to profit from his presidential run and was reportedly considering using his campaign to launch his own television network.

“I lost massive amounts of money doing this job,” Trump told the Times two weeks ago. “This is one of the great losers of all time.”