When it comes to raising money Booker has a gift, for his Senate race he out-raised even Mitch McConnell on Wall St 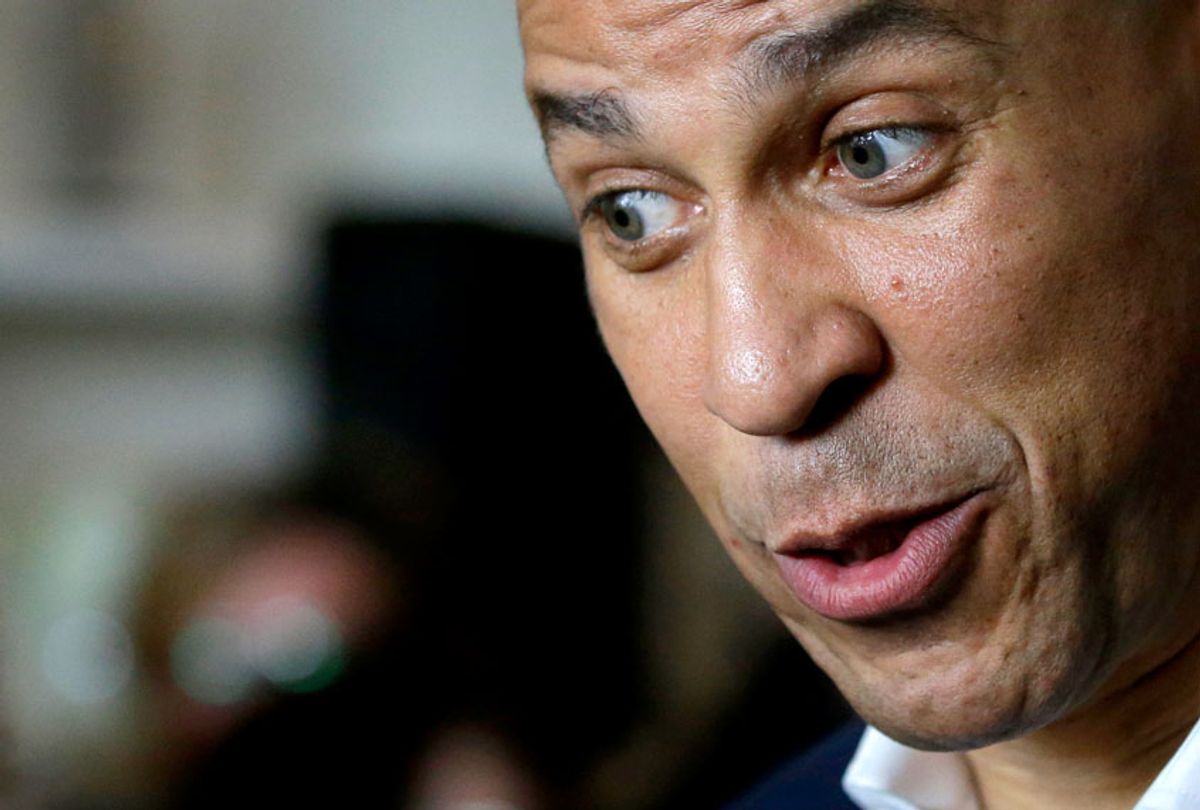 For years there has been speculation that Senator Cory Booker would run for President even as he was assembling the required resume to make such a bid.

There’s no doubt the nation is better off because Cory Booker is one of 100 people that populates what the Constitution’s framers intended to be our nation’s deliberative body.

His signature First Step Act, which reforms the Federal sentencing system that for decades promoted the draconian and immoral mass incarceration of millions of people primarily of color, would be a lifetime legacy all by itself.

Certainly as charming and charismatic as Senator Barack Obama was in 2008, his resume as a presidential candidate didn’t contain anything nearly as substantial.

As the Brennan Center For Social Justice observed, the First Step Act was essential to reverse the Federal government’s  bi-partisan get tough on crime strategy that resulted in a 700 percent increase in the population of the Federal prison system since 1980 as the system treated drug abuse and addiction as a criminal matter as opposed to a public health crisis.

And it would be safe to say, you don’t get to Booker’s deep understanding of the magnitude of the damage done by America’s misguided ‘war on drugs’ unless you have the granular understanding he has of what it does to communities of color like Newark where generations of children were orphaned by it leaving an army of grandparents to raise them.

Booker’s success at herding a Noah’s ark–like menagerie of political figures that included Jared Kushner, as well as conservatives Republican Senators Charles Grassley and  Mike Lee, is tangible evidence of his facility for translating his personal engagement of wealthy and powerful individuals into being part of advances for the collective well being.

And yet, as we suffer through the chaotic first term of President Trump, it would be wise for prospective supporters to delve more deeply into that transactional aspect of Booker’s biography that’s played out right here in the Soprano State to discern just what baggage the Senator might carry.

Elections are by definition an exercise in comparisons.

And if Democrats are to be successful in painting Donald Trump as self-dealing and acting for his own benefit, rather than the national interest, how will they draw that contrast successfully with Booker, considering his steadfast unconditional embrace of Senator Bob Menendez, whose  corruption trial ended in a hung jury?

The Menendez rants about the FBI and the U.S. Department of Justice’s prosecution of his case are eerily the same as Donald Trump’s twitter attacks on the Mueller probe. And the fact that the entirety of New Jersey’s Democratic elected power structure, led by Booker, backed Menendez, ignoring how he conducted himself, leaves Jersey Dems looking just like the GOP Congress they rightfully now chastise for enabling Trump with their silence.

What does it say about our politics if we have to rely solely on the criminal justice system to insure that the people we elect to high office don’t abuse it? Under this debased standard if it is not indictable is it none of our business?  Are ethical lapses acceptable if they are committed by members of our own party?

The first time I meet Cory Booker it was a bit tense. I was working at WNYC and I had heard that he was holding a fundraiser in Manhattan for his ill-fated first campaign for Mayor in 2002.

It seemed that Booker’s soliciting east of the Hudson (Wall Street) to raise money actually supported the narrative being offered by his rival, Newark’s long time incumbent Mayor Sharpe James. James insisted that Booker, who had already been elected to the City Council, was an ‘outsider’ looking to use Newark only as a stepping stone.

At Booker’s New York City fundraiser I worked my way past the velvet rope check-in and once inside encountered his communications director Jen Bluestein, a formidable force who was none to pleased to see me. She demanded to know what the point of my attendance was.

Evidently, the thought of my roaming free range in the club filled with wealthy New York City donors with a microphone was counter to his campaign’s narrative that he was running a grass roots campaign to reclaim Newark from the corrupt political machine.

Much of Booker’s success in raising money was from his appeal to wealthy individuals outside of Newark that he represented a refreshing incorruptible new face to lead the state’s biggest city.  Newark had largely languished since the 1967 civil unrest that left 26 dead and was violently ended by the New Jersey State Police and the National Guard.

Booker exploited the status of urban public education as a wedge issue, which pitted the teacher union against  the communities of color they served. Booker’s embrace of the charter school movement put him on the same page as Governor Christie and landed him on the same pro-charter non-profit board of directors as  current Trump Secretary of Education Betsy DeVos.

At the time, the Booker-Christie-DeVos corporatist critique of the Newark public schools fixed blame on the teachers for the city’s lack of educational achievement, ignoring entirely the whole host of other socio-economic trends that had been undermining Newark for generations.

It’s not easy to solicit big money from the corporate elites in hopes of augmenting authentic social progress. Usually there’s an inherent top down ethos that comes with those kinds of gifts.

Consider the 2010 high-profile $100 million grant to fund school reform in Newark Booker got from Facebook’s Mark Zuckerberg that he and the billionaire rolled out for the first time on “Oprah” along with Gov. Christie.

Dale Russakoff, the author of “The Prize: Who’s In Charge Of America’s Schools?” told NPR’s Terry Gross  back in 2015 the splashy national rollout left much of the Newark community feelingly left out and marginalized.

“Well, it played disastrously in the community because, immediately, nobody understood why do we have to turn on “Oprah” at 4 o’clock to find out what’s going on in our own city?,” Russakoff said. “And if you want to save the schools for the benefit of our children, why weren’t we told? And, by the way, there’s a very large consensus on the ground in Newark at this time that the schools really need change, that the schools are failing in unacceptable ways.”

Russakoff continued, “And so there wasn’t really, you know, a roadmap for how to do that, but there were a lot of people, including some very skilled, experienced teachers, who deeply understood the needs of the children in Newark who would have been eager to be part of that conversation. And not only were they insulted that they were left out, there was an agenda that was crafted that didn’t have the benefit of their really important insights into what was needed in Newark.”

Ultimately, at least $20 million went to consultants and Russakoff recounted the money was spent “the way the wealthy donors wanted it spent. And the priorities were not about getting money to the classroom or to the children. The priorities were to have to this kind of business model, top-down reform that had become very popular in the reform movement.”

In the Fresh Air interview Russakoff acknowledged that Booker  had “an incredible talent”  for  “framing issues and getting the nation to pay attention to them or at least getting a wide audience of people to pay attention to them and to pay attention to him in the process. But what he wasn’t strong on was in the patient, tedious, kind of unglamorous work of taking those promises and hammering them out into a different reality. He tended to have — you know, to be ready to go on to the next thing.”

Being able to access huge sums of money can be a double-edged sword, whether it be for a charity or for your campaign war chest. In American politics being able to do so is a prerequisite and yet there’s always the transactional taint that can follow the prolific fundraiser.

In 2014, WNYC’s Sarah Gonzalez reported that as a freshman Senator Cory Booker got $1.87 million in campaign cash from Wall Street, which ranked him as the top beneficiary from the sector of the economy that makes money with money.

Booker even outperformed Republican Majority Leader Mitch McConnell in that 2013-14 cycle, who lagged a half-million behind the newcomer. Booker also came in first place in attracting campaign largesse from the real estate industry.

As Esquire’s Charles Pierce pointed out Booker has “a tightrope” to walk because he “can’t help but be the candidate of the establishment, as defined by the Clinton and Obama administration. More than a few people remember him chiding the 2012 Obama campaign for being too hard on the private equity industry.”

At Booker’s press conference announcing his run for the presidency he sounded themes of social and economic justice.

For Booker, and similarly situated  contenders, the real challenge will be convincing Democratic primary voters he can actually bring real change for the 99 percent, despite the fact that in the past he’s been funded by the one percent that have profited so handsomely from the status quo.

This story was originally published in INSIDERNJ.com