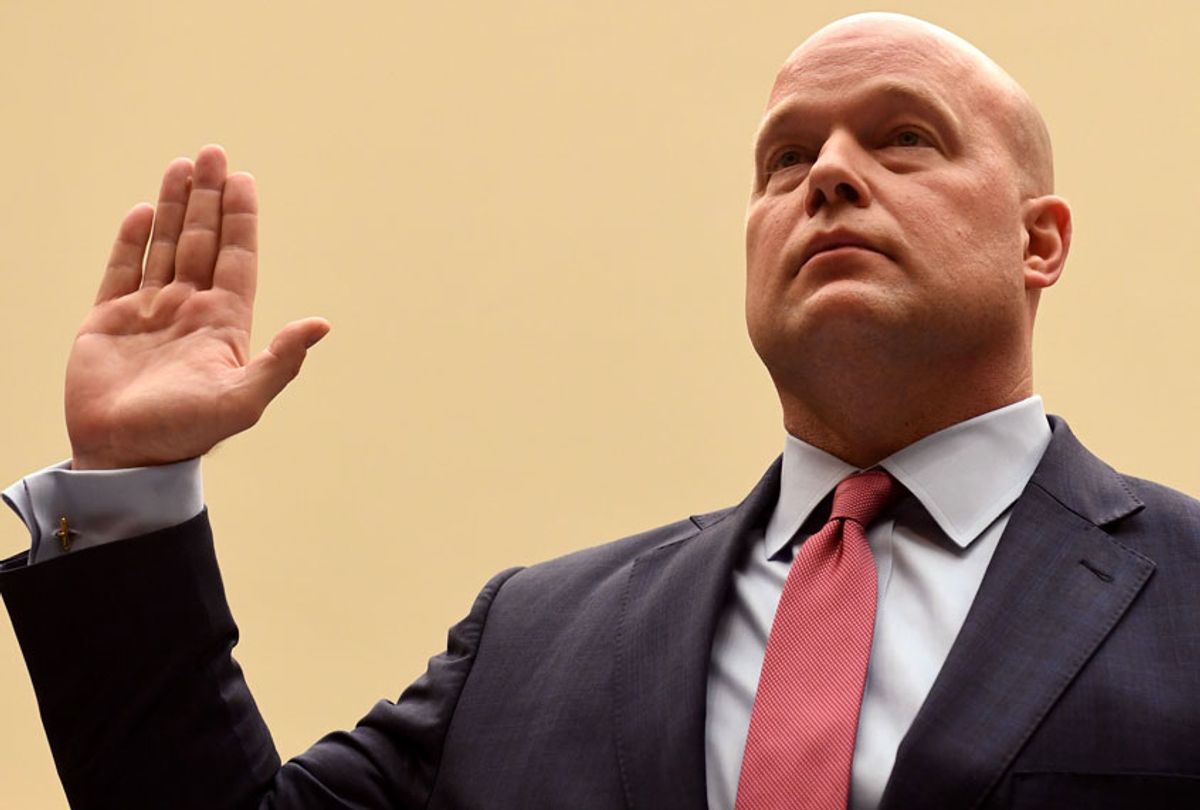 Acting Attorney General Matt Whitaker is sworn in before testifying at a House Judiciary Committee hearing on oversight of the Justice Department, at Capitol Hill in Washington, DC, on February 8, 2019. (Getty/Saul Loeb)
--

In a piece published by The New York Times on Tuesday, it was revealed that Whitaker was hired by Trump as a temporary replacement to Attorney General Jeff Sessions in part because he promised to "jump on a grenade" for the president.

As federal prosecutors in Manhattan gathered evidence late last year about President Trump’s role in silencing women with hush payments during the 2016 campaign, Mr. Trump called Matthew G. Whitaker, his newly installed attorney general, with a question. He asked whether Geoffrey S. Berman, the United States attorney for the Southern District of New York and a Trump ally, could be put in charge of the widening investigation, according to several American officials with direct knowledge of the call.

Mr. Whitaker, who had privately told associates that part of his role at the Justice Department was to “jump on a grenade” for the president, knew he could not put Mr. Berman in charge, since Mr. Berman had already recused himself from the investigation. The president soon soured on Mr. Whitaker, as he often does with his aides, and complained about his inability to pull levers at the Justice Department that could make the president’s many legal problems go away.

Because Whitaker had testified under oath to the House of Representatives that "at no time has the White House asked for nor have I provided any promises or commitments concerning the special counsel’s investigation or any other investigation," he is now under the congressional microscope to determine whether or not he committed perjury.

Trump also received assistance from Republicans who were not necessarily explicitly asked to provide it. In July 2017, Florida Rep. Matt Gaetz placed a call to one of the House's premiere conservatives, Rep. Jim Jordan of Ohio, arguing that it was time "to go play offense." The concern of both Gaetz and Jordan was that Republicans had handed Democrats a tool that they could use to destroy Trump's presidency by publicly praising Mueller after he was appointed in the aftermath of Trump firing former FBI Director James Comey. Trump and his lawyers publicly and privately encouraged Gaetz and Jordan to investigate those conducting the investigation, and only a few days later the two men drafted a letter to then-Attorney General Jeff Sessions and Deputy Attorney General Rod Rosenstein to reopen the investigation into Hillary Clinton's email scandal.

"Mr. Gaetz and Mr. Jordan began huddling with like-minded Republicans, sometimes including Representative Mark Meadows, a press-savvy North Carolinian close to Mr. Trump, and Representative Devin Nunes of California, the head of the House Intelligence Committee," the Times reported, identifying this period as the time when "the president’s fiercest allies in Congress and the conservative media were busy trying to flip the script on the federal law enforcement agencies and officials who began the inquiry into Mr. Trump’s campaign." That story has been reinforced by a tweet from The Atlantic writer Natasha Bertrand who claims that Nunes refused to recuse himself from the Trump investigation despite promising to do so, and is believed by some insiders to have funneled information about the probe to Trump himself.