Conway suggests Mueller may never release his findings: "Let's see if there's a report to discuss"

Conway also said if Mueller releases his report, it may never become public 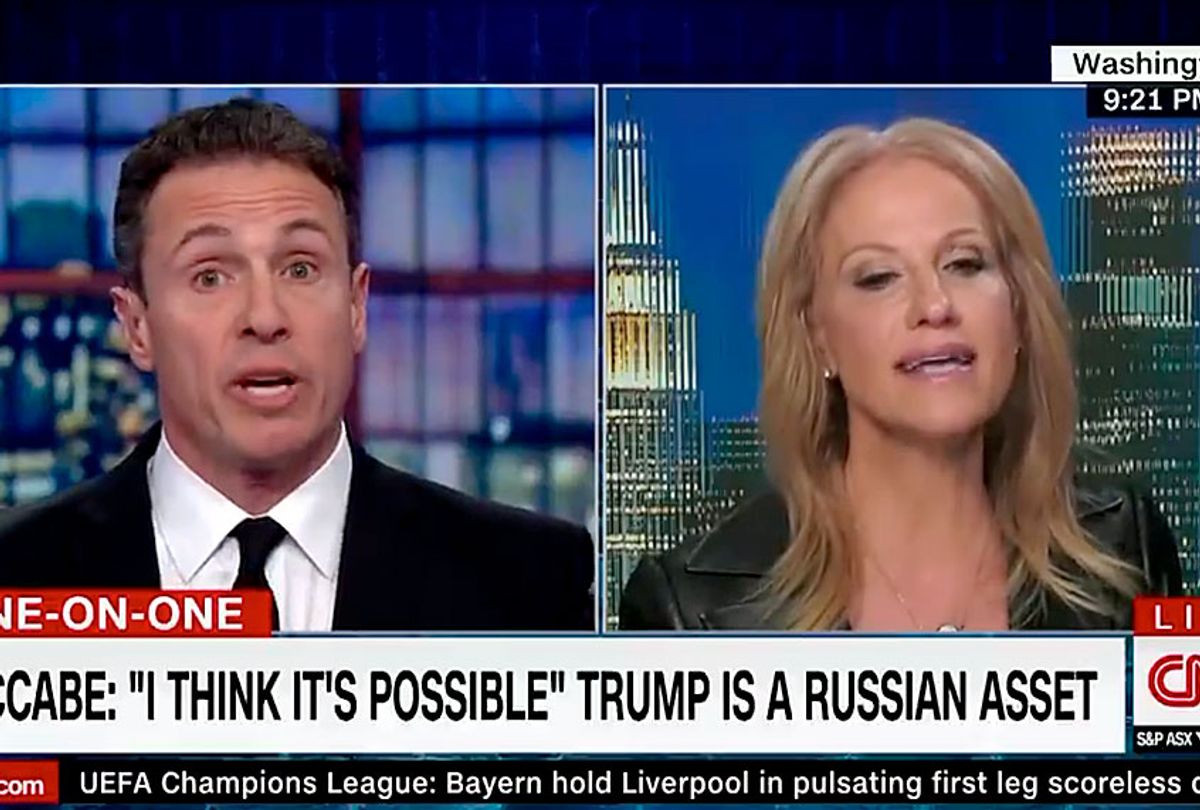 White House counselor Kellyanne Conway suggested that special counsel Robert Mueller may never release a final report about the Russia investigation — and if he does, it may never become public.

In yet another combative and lengthy appearance with CNN's Chris Cuomo, Conway hinted Mueller's long-awaited report on Russian interference in the 2016 election and allegations of collusion or obstruction of justice by the commander-in-chief, his presidential campaign or administration might not be completed.

"Let's see if there's a report to even discuss," Conway told the CNN anchor on Tuesday.

"Yeah," Cuomo interjected as Conway went on an offensive against Democratic lawmakers investigating the president.

Cuomo directed the conversation back to the highly-anticipated report, calling for the findings to be made public when it's finished.

"Forget about the Democrats. Focus on the facts," Cuomo insisted. "That report should be made public, and I hope you agree with that. And I hope the president does, as well. He should want it more than anybody."

"No, it's not," Cuomo corrected. "The AG's going to decide what to with it, and that's your boy, so hopefully it'll come out." (Cuomo is right: Mueller's responsibility is to deliver the report to the attorney general, who can decide where to proceed from there. Newly-confirmed Attorney General William Barr vowed to allow Mueller to complete the probe and make as many of the findings findings public as he is able during his confirmation hearings.)

Conway, however, made no promises.

Conway and Cuomo also squabbled over former acting FBI Director Andrew McCabe, who is currently on a media blitz to promote his new book, "The Threat: How the FBI Protects America in the Age of Terror and Trump." McCabe recently revealed that Justice Department officials discussed whether there was support within the Cabinet to invoke the 25th Amendment for the removal of the president. He has also broken his silence about why he ordered an obstruction of justice investigation into President Donald Trump in the days after former FBI Director James Comey's firing.

Conway described McCabe as a "known liar and leaker" and claimed that he "tried to overthrow a democratically-elected president." She and Cuomo then argued over the credibility of McCabe versus that of Trump.

Trump, for his part, has vehemently denied all allegations of collusion with Russia during the 2016 presidential campaign and has repeatedly railed against Mueller's investigation into the matter as a politically-motivated "witch hunt" and a "hoax." He has been upping his attacks on McCabe ever since the former acting FBI director returned to the public stage to discuss his new book. Most recently, Trump claimed McCabe committed treason by plotting a supposed "coup" against him after McCabe revealed he had considered ousting the president's via the 25th Amendment.

Citing Fox News host Sean Hannity, an informal adviser to the president, Trump wrote, "'The biggest abuse of power and corruption scandal in our history, and it's much worse than we thought. Andrew McCabe (FBI) admitted to plotting a coup (government overthrow) when he was serving in the FBI, before he was fired for lying & leaking.'"