Chris Cuomo suggests Sean Hannity is more powerful than Trump: "What he says, the president does"

Hannity, who's as an informal adviser to Trump, urged him on Fox News to declare a national emergency at the border 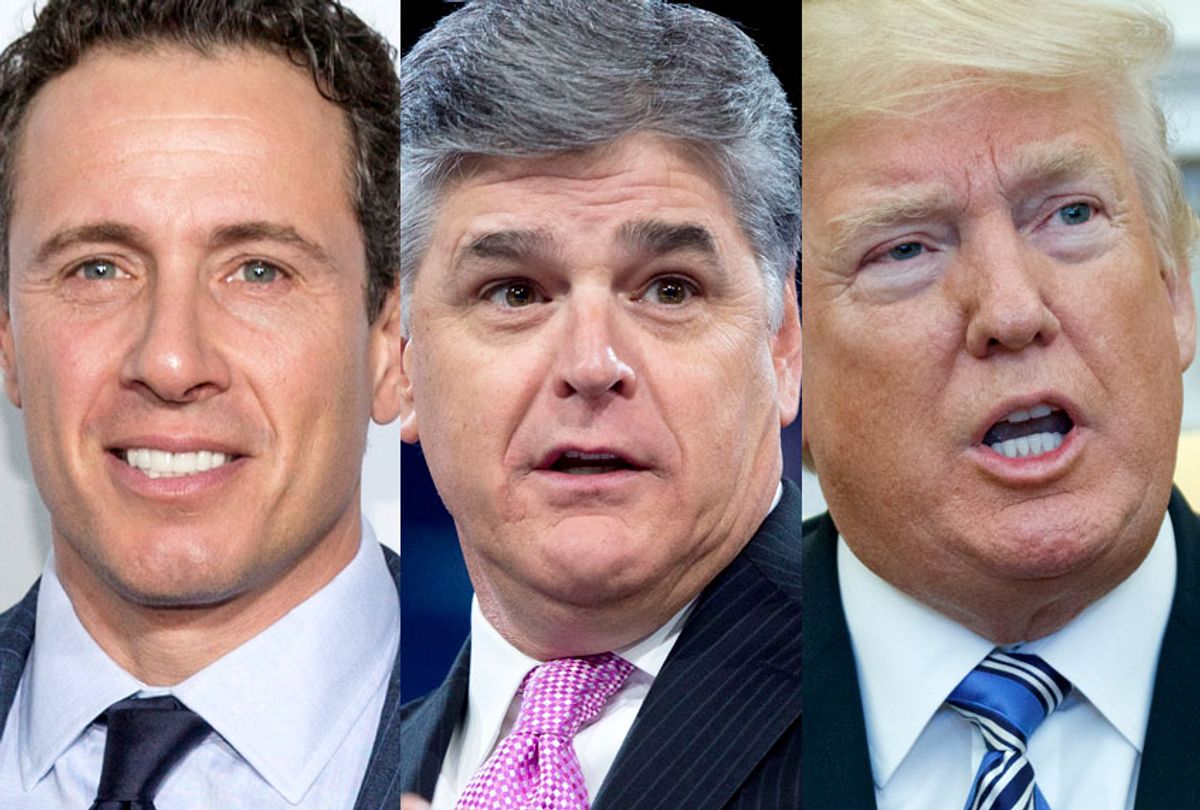 CNN's Chris Cuomo called Fox News host Sean Hannity "without a question the most powerful person in the media."

Hannity, who acts as an informal adviser to the president, urged President Donald Trump on Tuesday to declare a national emergency at the U.S.-Mexico border.

"This is the time," Hannity said on his primetime show. "That is a necessity."

The White House announced the next afternoon that it would declare a national emergency at the border. The decision came after the commander-in-chief said he was not pleased with a bipartisan agreement reached by Congress earlier this week to avert a second government shutdown over border security and immigration.

"I can't say I'm happy. I can't say I'm thrilled," Trump told reporters as in response to the deal reached by Democrats and Republicans, which provides him with a fraction of the funds he has requested for his wall along the southern border.

The bipartisan agreement includes $1.375 billion for 55 miles of new border fences — a figure that Hannity previously suggested was peanuts compared to the $5.7 billion Trump had previously demanded for the construction of 200 miles of walls along the southwestern border.  Hannity slammed the deal as "garbage" on his show Monday night and warned that any Republican supporting the compromise would "have to explain" his or her position.

"President Trump will sign the government funding bill, and as he has stated before, he will also take other executive action - including a national emergency - to ensure we stop the national security and humanitarian crisis at the border," White House press secretary Sarah Sanders said in a statement. "The president is once again delivering on his promise to build the wall, protect the border and secure our great country."

Declaring a national emergency would allow Trump to start constructing his wall immediately by circumventing the legislative approval required from Congress. Trump is reportedly seeking to redirect funds from the Treasury Department's drug forfeiture fund, according to NBC News. Republicans lawmakers and White House officials, including Jared Kushner, have indicated they would prefer Trump not to rely on such an option to build the wall because of the legal challenges that would follow.

"We've never seen that before," Cuomo interrupted. "What he says, the president does."

"It's not that clear," Gaetz interjected, noting that Trump and the Fox News host "have exchanges and robust discussions, and they bounce ideas off of each other." The congressman also said it was good that the president is seeking advice from "a lot of different people and is not stuck in the cocoon of the West Wing."

"We could go on all night, as a statement against interest of how crazy it is that with all the expertise the president is privy to – that he chooses someone like me to listen to about major policy matters is something that I could really scrutinize all night," Cuomo said.

"I reject the premise the Hannity is someone like you," Gaetz said, laughing. "You're very different."

"We are different. But when it comes to what either of us knows about national policy, and how to lead and how to govern, we're both at zero," Cuomo said. "That's why we're on TV and not in elected office, and he knows it. He'd be in public service if he thought he could do it better than everybody else."