Prada, Gucci and now Burberry: Are brands under fire for offensive designs doing it on purpose?

Why are these companies all making the same awful mistakes at the same time? 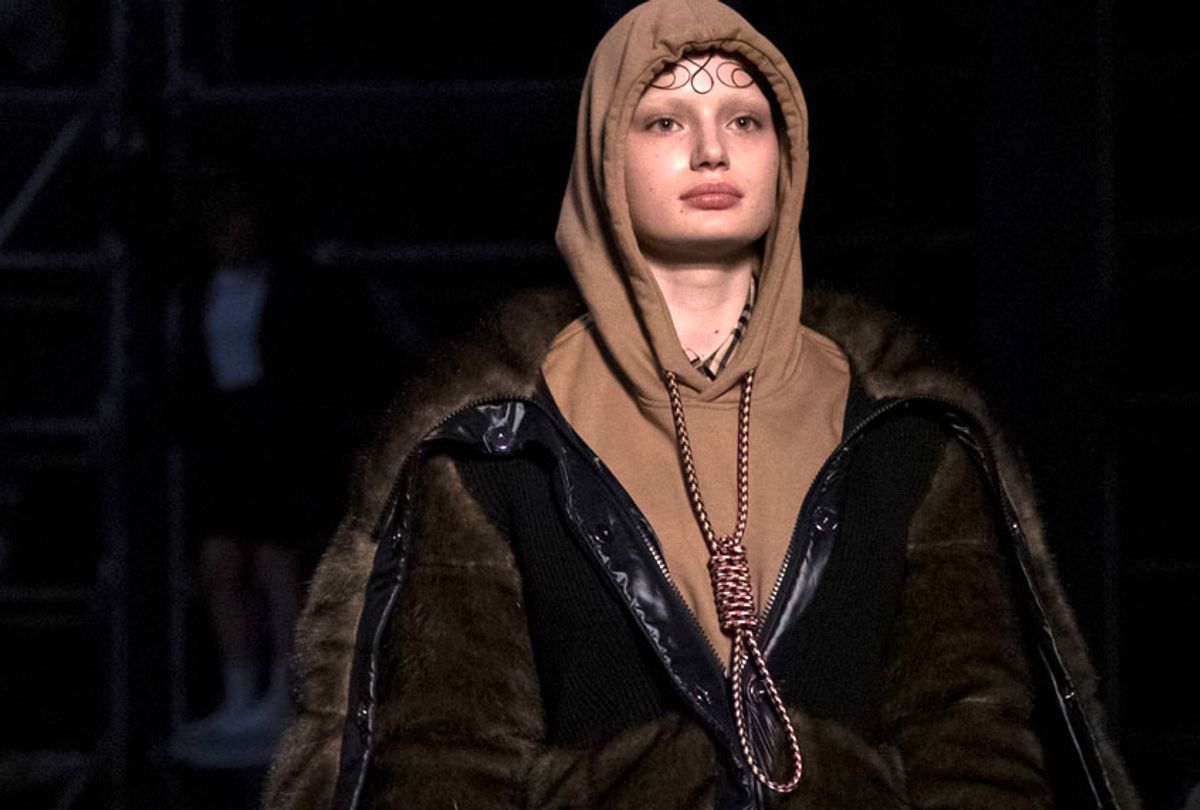 A model wearing a creation by Burberry at the Autumn/Winter 2019 fashion week runway show in London. (AP/Vianney Le Caer)
--

Burberry is the latest fashion designer brand to come under fire for using racist and offensive imagery in its new collection. The company ventured away from its quintessential check pattern and debuted a hooded sweatshirt at London Fashion Week on Sunday, in which the drawstrings that typically hang from a hood were swapped out for a rope tied into a noose. Burberry was widely criticized for evoking racial terror via lynching, as well as suicide.

In response to the hoodie, model Liz Kennedy wrote on Instagram, "Suicide is not fashion," she said. "Riccardo Tisci and everyone at Burberry it is beyond me how you could let a look resembling a noose hanging from a neck out on the runway. How could anyone overlook this and think it would be okay to do this especially in a line dedicated to young girls and youth. The impressionable youth. Not to mention the rising suicide rates world wide. Let’s not forget about the horrifying history of lynching either."

Burberry released several statements of apology, saying that they had pulled the sweatshirt from the line. "Though the design was inspired by the marine theme that ran throughout the collection, it was insensitive and we made a mistake," CEO Marco Gobbetti said. Chief creative officer Riccardo Tisci issued a similar statement, claiming that the sweatshirt was "inspired by a nautical theme" but that he now sees it was "insensitive."

But Kennedy added in her Instagram post that with literally hundreds of ways to tie a rope, it should not be "overlooked" that Burberry landed on this particular one. Sharing her personal experience with the designer brand, she continued:

"I left my fitting extremely triggered after seeing this look (even though I did not wear it myself). Feeling as though I was right back where I was when I was going through an experience with suicide in my family. Also to add in they briefly hung one from the ceiling (trying to figure out the knot) and were laughing about it in the dressing room. I had asked to speak to someone about it but the only thing I was told to do was to write a letter. I had a brief conversation with someone but all that it entailed was 'it’s fashion. Nobody cares about what’s going on in your personal life so just keep it to yourself' well I’m sorry but this is an issue bigger than myself."

Gobbetti also said in his statement that "The experience Ms. Kennedy describes does not reflect" Burberry's values. "We will reflect on this, learn from it and put in place all necessary actions to ensure it does not happen again."

Burberry isn't the only brand making headlines like this. Earlier this month, designer brand Gucci was embroiled in controversy after unveiling a sweater with a design that resembled blackface. Images of the black turtleneck, pulled up over a model's mouth and featuring a mouth cut-out emphasized by wide, bright-red lips, made the rounds as actual instances of blackface were front and center in political news after Virginia Gov. Ralph Northam's medical school yearbook was unearthed. Like Burberry, Gucci apologized and said it was discontinuing the sweater, adding, "We are fully committed to increasing diversity throughout our organization and turning this incident into a powerful learning moment for the Gucci team and beyond."

Yet just a couple of months ago Prada was criticized for window displays touting its Pradamalia line which also evoked racist imagery. Prada's SoHo Manhattan storefront displayed trinkets that appeared to be monkey-like and colored black, with oversized red lips. After the backlash ensued, Prada apologized and pulled the window displays. "They are imaginary creatures not intended to have any reference to the real world and certainly not blackface," the company said in a statement. "Prada Group never had the intention of offending anyone and we abhor all forms of racism and racist imagery."

The fashion industry struggling with (and faltering on) diversity and inclusion is nothing new. As Washington Post fashion critic Robin Givhan wrote, "Chanel scrawled a verse from the Koran across the bodice of a dress and appropriated Native American headdresses. Dutch label Viktor & Rolf covered white models in black body and face paint, creating a look that called to mind a high-fashion minstrel show. Even American designer Marc Jacobs caused a stir when he incorporated fake dreadlocks on white models in a New York runway show."

But the new merchandise from Prada, Gucci, and now Burberry stands out because of the timing —  the latter two launching these designs during a fraught Black History Month —  and more generally for feeling especially egregious in an era when brands should know better than to "inadvertently" sell clothes using racist imagery or insensitivity to mental health. Even Northam's meager defense to maintain his gubernatorial post — albeit a dubious and controversial one — centered on his claim that it had been many decades since he darkened his skin for a Michael Jackson dance contest.  But in the year 2019, who over the age of 20 doesn't immediately recognize the painful, racist imagery of blackface and lynching? (Well, besides Megyn Kelly?)

In response to public outcry, some of the brands have either reinforced their professed commitment to diversity or promised to increase it — suggesting, then, that a lack of corporate diversity is to blame. While diversity continues to be a major problem in fashion, acting as if no one spoke up or expressed concern about the message of the clothes ahead of time is, at least in the case of Burberry, at odds with Kennedy's description of what transpired.

As she said in her Instagram post, "The issue is not about me being upset, there is a bigger picture here of what fashion turns a blind eye to or does to gain publicity. A look so ignorantly put together and a situation so poorly handled. I am ashamed to have been apart of the show. #burberry."

Others on social media had a similar reaction. "This shit is for attention," Dani Kwateng-Clark, senior culture editor at Broadly, tweeted. "There's no fathomable way that fashion pulls from art and culture, yet is completely oblivious to triggering symbols. When will this mess end?"

"At this point, they are trolling us," tweeted Shelby Ivey Christie, who hosts the podcast, Girl with the Bamboo Earring, on blackness and fashion.

While we can't know for certain the underlying motives, the fact that these fashion brands with their robust creative divisions and publicity machines are all making similar mistakes and following the same formula for attempted recourse does raise a disturbing question: Are designer brands manipulating consumer and influencer disgust and dismay over traumatic images as a marketing strategy?

Salon's Amanda Marcotte and author of "Troll Nation" told me, "The old saying that 'there's no such thing as bad publicity' seems to be panning out for these companies. Sure, they get blowback and criticism when they do something obnoxiously racist, but they also get their name into the news cycle and remind consumers that they exist."

She fears these luxury fashion brands might also be more strategic about the controversies, beyond simple trolling. "Even more troublingly, I worry that these controversies might help their image with certain kinds of consumers," Marcotte added. "The brands are now even more strongly associated with eliteness and whiteness, qualities that still appeal to the moneyed customers they're trying to get. Plus, they now have a reputation for being 'politically incorrect,' which, as Trump's success with wealthy donors can tell you, is exactly the sort of thing that opens the wallets of the still very white, still very conservative wealthy elite."

Following the release of Gucci's sweater, there was a concerted effort from some celebrities and former consumers who called for a boycott of the company. Rapper 50 Cent posted a video to Instagram of him burning a Gucci shirt in protest and declared, "I'm not supporting their brand anymore."

If luxury brands are trolling for publicity and profit, or worse, how should the public engage with them? Do boycotts and social media outrage give the companies the publicity they already potentially crave?

"One of the reason trolling is so maddeningly effective is it feels like there's no good way to respond," Marcotte told me. "Outrage feeds the trolls, but ignoring them allows their bigotry to spread unchecked."
To hold brands accountable, she continued, it's important to name racist trolling for what it is. "With these brands, for instance, it might not be enough to be outraged at the racism," Marcotte added. "Instead, it may be more helpful to point out that the repeated racist 'mistakes' are looking less like mistakes all the time. That recasts people who buy their products not as politically incorrect rebels, but rubes who are being cynically exploited for money."