Morning TV confessionals: From Nick Sandmann to Jussie Smollett, these interviews fail us 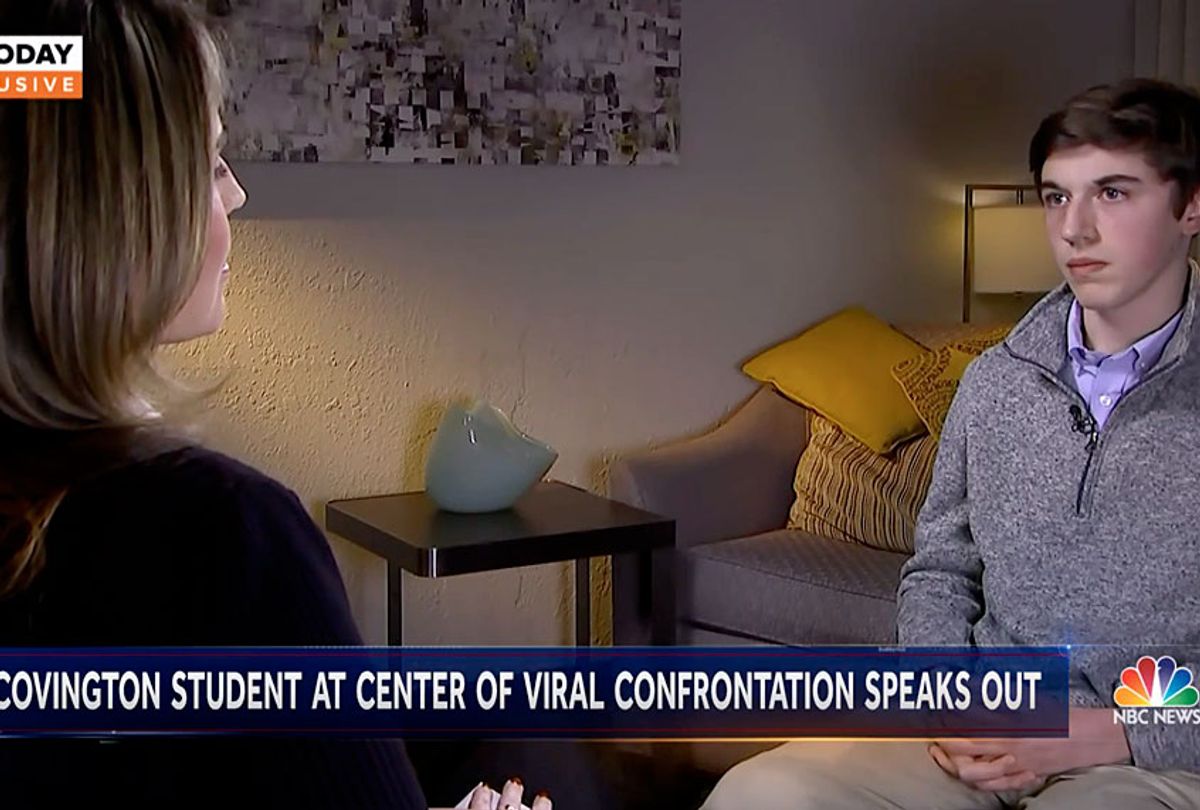 Although “The Oprah Winfrey Show” has been off the air since 2011, its namesake never stepped out of the spotlight long enough to miss her. Except we do, if only for a few fleeting moments, whenever a morning television anchor like Savannah Guthrie or Robin Roberts interviews a celebrity, whether said public persona makes a career of fame or finds fame thrust upon him.

When Oprah had a weekday talk show, actors such as Liam Neeson or Jussie Smollett could make their case to America in a forum understood to be a place of revelation, healing and restitution, for better or worse, true or false. Covington High School student Nicholas Sandmann might have been featured alongside his parents and, very likely on the same stage together or separately, the Omaha tribal elder Nathan Phillips.

In his interview with Guthrie, Sandmann did say he respects Phillips and would like to talk to him. One imagines Oprah, and the producers of “Oprah,” would have been delighted to facilitate such a meeting. Certainly the camera angles would have been a lot friendlier to all parties.

But in 2019 television lacks any such powerful confessional largely immune to partisan rancor, leaving embattled people in the public eye to turn to morning television platforms such as NBC’s “Today” or ABC’s “Good Morning America.”

There, headline makers can explain themselves with the knowledge that what they say will largely go uncontested. At most, their statements will be slightly questioned. They can shape the narrative as they see fit, receiving benediction by way of a journalist’s empathetic mien in reaction to their replies.

Doing so does not solve the overlying  problems that brought them to the interviewer in the first place. Instead these sit-downs tend to amplify tensions, without purchasing additional understanding from the public. Part of this is due to a view of mainstream media informed by virulent tribalism. Part is due to morning television's perceived place in the broadcast news spectrum.

“Today” and “Good Morning America” are reposeful entries into the day, hybrids of entertainment and headlines mainly fueled by human interest appeal. Such formats and filters are not well-suited to sufficiently grapple with the uncomfortable nuances of stories related to racial animus and our class divide. Neither, for that matter, is the American daytime talk show. Either way, coverage related to highly explosive social issues tends to be feelings based, downplaying substantive inquisition.

More often, then, when modern morning TV host/anchors sit down with subjects like Neeson or Smollett, critics rake them over the coals for failing to deliver harder and more skeptical queries. Previously private figures like Sandmann receive a kid glove treatment, regardless of the circumstances and machinations that have attracted newsroom cameras. And lately it seems that the interviewers are more frequently emerging from these encounters worse for wear in the public's perception than the people interviewed.

Roberts' and Guthrie's capabilities are not in question, mind you. Guthrie rose through the ranks of NBC News, serving as a White House correspondent prior to joining "Today." Roberts is a Peabody Award winner and a recipient of the Walter Cronkite Award for Excellence in Journalism. At their best neither shies away from prodding interviewees with tough questions when the need arises, hence the sustained criticism for treating recent celebrity subjects like, well, celebrities.

Roberts, for instance, only gently questioned aspects of Smollett's story that have provoked intense scrutiny, such as his refusal to hand over his phone. In light of recent developments — the "Empire" star was arrested in Chicago Thursday on charges of disorderly conduct for allegedly filing a false police report about a physical attack that he described as including racist and homophobic slurs, which the police now suspect him of engineering himself — the anchor's late interview inquiries of "What do you feel people need to hear the most from the story?" and "What do you say to a young gay man, a young gay person?" only add credence to assertions that her overall handling of Smollett was unduly soft given the specious details of his account, which now appear to have fallen apart.

When taking on Sandmann, a teenager whose family hired a publicity firm with ties to the Republican party after unflattering video of his Washington, D.C. confrontation with Phillips went viral, critics deducted points for Guthrie’s deference to her subject, not to mention the choice to feature the interview in the first place.

Notice that Guthrie’s on-camera interview with Sandmann was conducted in person, edited to afford ample views of her facial expressions, many of which brim with what appears to be empathy and unquestioning concern for his feelings as opposed to the substance of his responses. A subsequent “Today” interaction with Phillips was conducted via satellite, and her line of inquiry centered on Phillips’ response to Sandmann’s establishing narrative, asking him to clarify the nature of his military service on top of that. Put more simply, the initial one-on-one interview pursued understanding, the second demanded rebuttal and justification of the subject’s reliability.

In most of these circumstances neither the subject nor the interviewer is in a position to come out looking better.  And I’d theorize this may be due, at least partly, to the structure perfected by Oprah, where there was some expectation of revelation and admonishment and in some cases, a sense of penance served.

That's less possible in 2019 than in 2011, mind you. Those tuning in to watch Guthrie interview Sandmann, or Roberts seeking an explanation from the hero of the “Taken” franchise or emotional insight from the star of “Empire,” likely harbored specific feelings about the subjects of each subject before watching their gentle, low-heat TV grillings.

And one can't ignore the matter of the forum in which Neeson first made his spontaneous, on the record confession about indulging a racist impulse many years ago, a rage-filled response to his friend’s rape by a black man. In his words, he responded to her pain by walking the streets with a “cosh” (a bludgeon) “hoping some ‘black bastard’ would come out of a pub and have a go at me.” That's horrifying.

Roberts walked him through his account on camera with a multicultural group of audience members featured in the background, watching dispassionately as he recounted the tale in virtually the same way that he did  in an interview published in The Independent, which broke the story. Only this time we could watch him talking.

While watching Roberts interrogate Neeson and refuse to buy his excuse of being a product of growing up in Northern Ireland in a violent era, shadows of the “Oprah” influence and that of retired ABC legend Barbara Walters, are noticeable — particularly when she brings up the concept of the “teachable moment.”

There are several of those here, certainly, such as this: Had Neeson made that unbidden admission to Barbara or the almighty Oprah — and to us, his brothers and sisters, that he had sinned in through his thoughts and words, in what he had done and what he had failed to do — the public’s reaction may been more muted.

Ironically it is a nighttime talk show host, Trevor Noah on "The Daily Show," who points this out in one of his viral “Between the Scenes” videos, in a response to audience member’s solicitation of his thoughts on Neeson.

Oprah’s audience may have gasped and shaken their heads, he says, but the host’s talent of dispensing subtle absolution likely would have left the sense of Neeson’s story as a powerful cultural learning.

But the actor's confession emerged first in print, by way of a journalist who went on to explore the implications of such a statement coming from an international film star, as well as the psychological impact of processing a loved one’s sexual assault.  Mostly, though, what stuck in the public's perception was the realization that a popular mainstream action star once angrily stalked the streets with the intent of unleashing violence upon a black man in retribution for a crime that man did not commit. The guy worshiped by Keegan-Michael Key's and Jordan Peele's parking valet characters on “Key & Peele” as “the Liam Neesons,” no less.

This week Noah has displayed less patience and charity toward Smollett, sparing no bit of mercy for the "Empire" actor's passionate defense of his ongoing and increasingly bewildering allegations about being a victim of a racist and homophobic attack in Chicago. This mostly because the police investigation has been ongoing, and at the moment, Smollett is the one on his way to criminal  court.

He could, however, draw a solid conclusion about Smollett’s tearful moments during the one-on-one interview with ABC’s Roberts that aired on February 14: “Either this guy is telling the truth or he deserves an Emmy for that interview. Because if all of that was just a performance, I don’t care what he’s lying about, you can’t cancel him. He’s too good to not be on TV!”

Well, he is going to be all over TV, at least in the short term: On Wednesday Chicago police charged Smollett with filing a false police report, a Class 4 felony. At present, consider his career to be cancelled. Sandmann’s NBC interview, on the other hand, may mark the beginning of what could be an extended stay in the spotlight, the first station in a developing media story casting him as the plaintiff in a $250 million defamation suit against The Washington Post, a newspaper.

Neeson’s status as a movie was never in real peril. Anyone doubting this can be referred to the filmography of Mel Gibson, winner of two Academy Awards in 2016 and co-star of the 2017 holiday comedy “Daddy’s Home 2.”

Besides, in the long view of his story, Neeson already has made his amends. In his interview, when Roberts asks if he understands “the pain of a black person hearing what you said,” he replies, of course. “Violence breeds violence, bigotry breeds bigotry,” observes the star of a franchise showcasing brutal, vendetta-driven cinematic violence.

One might characterize that moment as  “Oprah”-esque . . . almost. Seconds later, Neeson awkwardly jams in a plug for “Cold Conflict”: “See the movie, it’s a good movie by the way . . . having said all that.” The real lesson here is that guys like him understands the value of cutting to a break. History and consumer habit tells him, and us, that regardless of what happened in the past or disgusts us in the present, odds are in a few months we’ll be right back.