Many Americans want a new national story: How about this one?

Can we rebuild democracy, and America's civic culture, with a progressive new national myth? It's worth trying 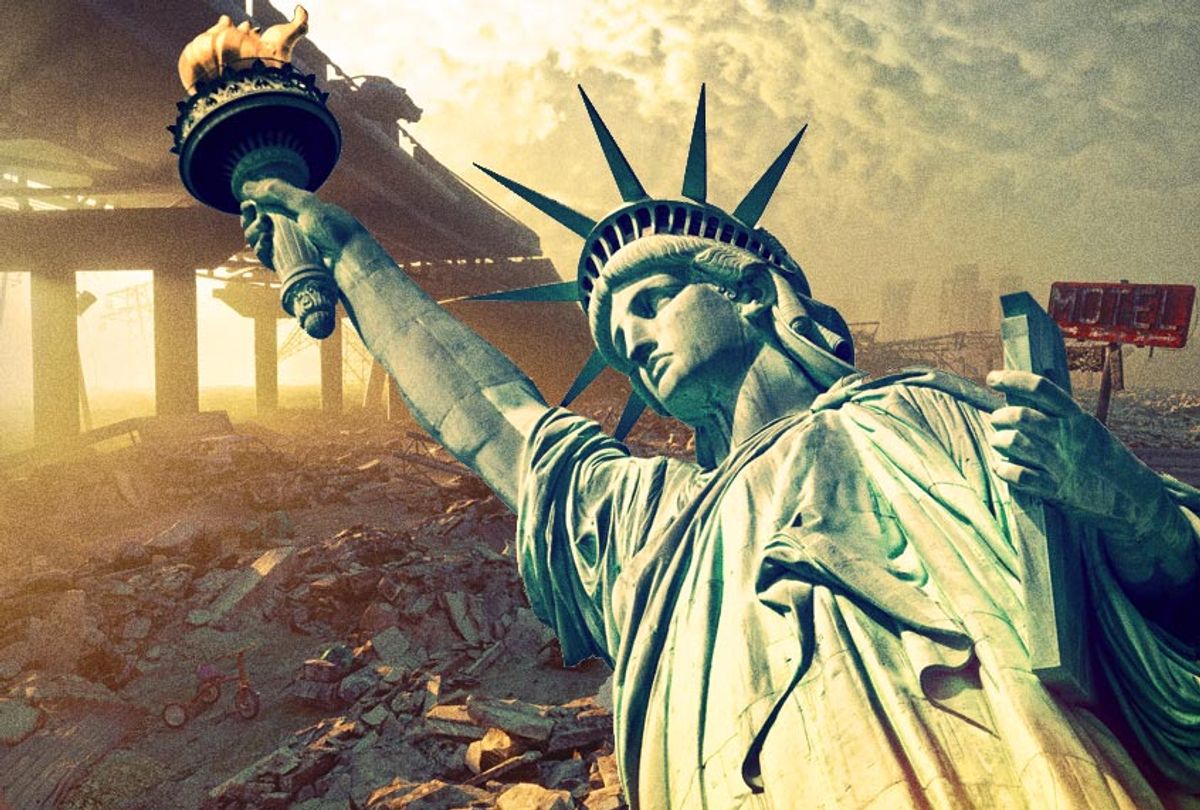 The 18 Yale students who crowded into a seminar room one September morning in 1999 for a course entitled “New Conceptions of American National Identity” didn’t know what they were in for. Nor did I, their instructor. Nor did most Americans know what the nation itself was in for, as we know now, 20 years later.

Or do we? What have we learned about American national identity since 9/11, since the Afghanistan and Iraq war fiascos, since Hurricane Katrina and other climate disasters beyond any one nation’s power to prevent, and since 2016, when the accumulation of injustices in our own streets and suites erupted in blind rage to empower a casualty and carrier of what he called the “American carnage” to “fix it”?

One thing I thought I knew on that first day of that 1999 class was that “The New Colossus,” a grand civic poem that Emma Lazarus wrote in 1883 for the Statue of Liberty, signified what had really made America powerful in the exceptional and, yes, troubling ways that had brought most of my students’ grandparents or parents to the country and the students themselves to my class:

Not like the brazen giant of Greek fame,
With conquering limbs astride from land to land;
Here at our sea-washed, sunset gates shall stand
A mighty woman with a torch, whose flame
Is the imprisoned lightning, and her name:
Mother of Exiles....
“Keep, ancient lands, your storied pomp!” cries she
With silent lips. “Give me your tired, your poor,
Your huddled masses yearning to breathe free,
The wretched refuse of your teeming shore.
Send these, the homeless, tempest-tossed to me,
I lift my lamp beside the golden door!”

No other nation had peopled itself and become strong that way, as I could see from the surnames of the young American citizens who’ve taken my course: Remes, Bumatay, Kim, Ly, Jarrow, Fiskin, Espitia, DeShong, Dizon and on and on. Yes, white Americans had slaughtered Native Americans and had conquered, abducted and subordinated Latinos and Africans who hadn’t joined the United States of their own volition. Ernst Renan’s 1882 essay “What is a Nation?” showed my class that every nation lies to itself about its suppression and forcible incorporation of varied peoples into a supposed national family. The historian Benedict Anderson’s brilliant "Imagined Communities" showed us that members of even supposedly homogeneous nations know and feel bound to one another mainly through school textbooks, market exchanges and national story lines -- collective fictions like “The New Colossus” and myths dramatized in movies and other mass media -- that tell them who they are as a people and what they share and owe to one another.

What makes those national story lines true? When Lazarus’ new colossus welcomed the world’s huddled masses in 1883, a still-open frontier and burgeoning labor markets beckoned them too. But as a rising plutocracy’s Gilded Age clamped down on republican civil society, the Golden Door began to resemble the biblical Golden Calf that some Israelites fabricated and worshiped idolatrously even as Moses was bringing them the tablets of the Covenant. Even universalist, republican France, which gifted the Statue of Liberty to the United States, was just as hypocritical in dissembling its oppression of colonies and its grinding inequities at home.

What no other nation besides the U.S. had done at the time of the American Revolution was to establish itself officially on universal, “self-evident truths” about equal dignity and unalienable rights, instead of on nationalist myths of divine destiny, blood kinship and sacred soil – Blut und Boden, as Germans called it. America’s exceptional national story line told of a gunshot, fired by “embattled farmers” against an empire in 1775, that was “heard ’round the world,” as Ralph Waldo Emerson put it, heralding the Enlightenment’s entry into history.

In that American myth, a new, republican citizen was rising against divine-right monarchy, aristocracy and mercantilism. History seemed to have destined Americans, “by their conduct and example, to decide the important question, whether societies of men are really capable or not of establishing good government from reflection and choice, or whether they are forever destined to depend for their political constitutions on accident and force,” wrote Alexander Hamilton in 1787, urging ratification of the Constitution.

That Constitution made the American nation all the more exceptional, precisely in abducting and plunging into its “white” midst masses of people who, because the Constitution existed, had the highest possible stakes in making the country make good on its enlightened, constitutional response to Hamilton’s “important question.” Some former slaves and their descendants became the national myth’s strongest adherents and most eloquent champions, insisting that citizenship isn’t a racially, ethnically, sexually or economically exclusive club but a joint public effort to reach goals in common that no subgroup or lone ranger can reach by acting on its own.

Twenty years ago, most of my students and I took that creative American tension and its emblematic, progressive struggles as given: In America, “the language of hegemony and the language of dissent were all but inseparable,” as the literary historian Sacvan Bercovitch told us in "American Jeremiad." Speaking truth to power was daunting and sometimes lethal, but ultimately it was irrepressible in our civic culture and national character.

So we’d been told, and it certainly seemed true on the night of Barack Obama’s election in 2008, when thousands of Yale students, including my own, poured spontaneously out of their residential colleges and into the historic Old Campus, bursting,  unbidden and unrehearsed, into singing rounds of “The Star Spangled Banner.” The groundswell of unabashed, “liberal” patriotism seemed to answer Hamilton’s question again, and the answer was echoed as Obama, in Chicago’s Grant Park, affirmed that “government of the people, by the people, and for the people” had not perished from the earth.

But now it seems that the United States needs a rather different story line -- that it has needed a new one at least since 9/11 and the Iraq War fiasco discredited its claim to herald a classically liberal, capitalist, democratic world order. Certainly we’ve needed a better national story since 2005, when Hurricane Katrina showed us all that climate change’s causes are all-too-human (and disproportionately American.) Surely we need one now that reactions to proliferating injustices in our streets and suites have elevated a carrier and casualty of accident, force and fraud to subvert Hamilton’s Constitution.

Have we decided his “important question” by proving ourselves incapable of democratic self-government after all? Have the swift, dark undercurrents that are also transforming other nations and notions of order swamped all hope that even America’s worst crises make us exceptionally promising? Are we back at the foot of Mt. Sinai, worshiping a Golden Calf?

Some New England Puritans thought so in 1701. They founded Yale because they thought that Harvard was dragging the holy Puritan mission into a swamp of slippery deals, in a world increasingly connected and flattened by commerce. The world isn’t flat, Yale’s founders insisted. It has abysses that open suddenly at our feet and in our hearts, and young Americans need myths and coordinates that are clear and potent enough to help them plumb those depths, face the demons in them and in themselves, and sometimes defy worldly powers on behalf of a higher one.

I’ve reckoned with those claims this week in an assessment for the Los Angeles Review of Books of historian Daniel T. Rodgers’ "As a City on a Hill," which tells how the Puritan lawyer John Winthrop, first governor of the Commonwealth of Massachusetts, tried to offset the “carnall lures” of its early capitalist profiteering with stricter enforcement of its “weal,” or common good. “It is a true rule that particular estates cannot subsist in the ruin of the public,” Winthrop warned. That sounds like today’s Commonwealth of Massachusetts senator, Elizabeth Warren, when she tells entrepreneurs and investors that their private success depends on public investments in education, infrastructure and more:

One of John Winthrop’s favorite public narratives was the biblical account I’ve cited of Moses versus worshipers of the Golden Calf. Winthrop took up Moses’ daunting rule in leading a wayward, sometimes-fickle people from slavery to a new promised land. So did Yale’s founders, who put Hebrew on its seal and called it a “school of prophets,” likening themselves to the Israelites leaving Egypt. So did John Adams and Thomas Jefferson, who proposed that the Great Seal of the United States depict Israelites crossing the Red Sea. So did Martin Luther King Jr., who invoked the Exodus myth often in leading his formerly enslaved people toward a new American promised land.

All these “national” story lines converged at Yale’s 1964 commencement, when university president Kingman Brewster Jr. -- himself a descendant of the Elder William Brewster, who ministered to a Puritan “exodus” on the Mayflower -- presented an honorary doctorate of laws to King. They shook hands across not only the color line but also across time and space, bending the poetry of a national story line toward power.

We needn’t revert to Winthrop’s puritanism to renew a narrative that’s progressively national and exceptional, without being ideologically “nationalist” in the ways that the current occupant of the White House wants. My classes on American national identity have pondered that challenge.

G.K. Chesterton called America “a nation with the soul of a church” because its civic compact requires faith, even as it wisely refrains from imposing a particular doctrine and leaves room (as Winthrop’s commonwealth did not) for respectful non-believers like me and many of my students. To pull off that balance, and to prevent militarized, bureaucratized states from hovering like crows over the nests that nations make, as the historian Robert Wiebe put it in "Who We Are," a fine book defending our anthropological need for nations even when they're economically and technologically outmoded and misrepresented by states.

To nurture and defend familial nations against brazen nationalism, we’d need to tap and channel American civic culture’s mythic wellsprings and story lines vigorously toward national service projects for the young and larger contributions from “particular estates” that prevent “the ruin of the public” and of private estates themselves. Anyone who claims otherwise is likely a nationalist defender of mythically “sacred” blood and soil and the Golden Calf, but not a patriot of the liberal American nation through whose Golden Door my students’ families and mine escaped the cobwebs and chains of ethno-racial superstition and nationalist war.