"There aren't that many hate crimes occurring in the country . . . so they have to make them up," Carlson claims 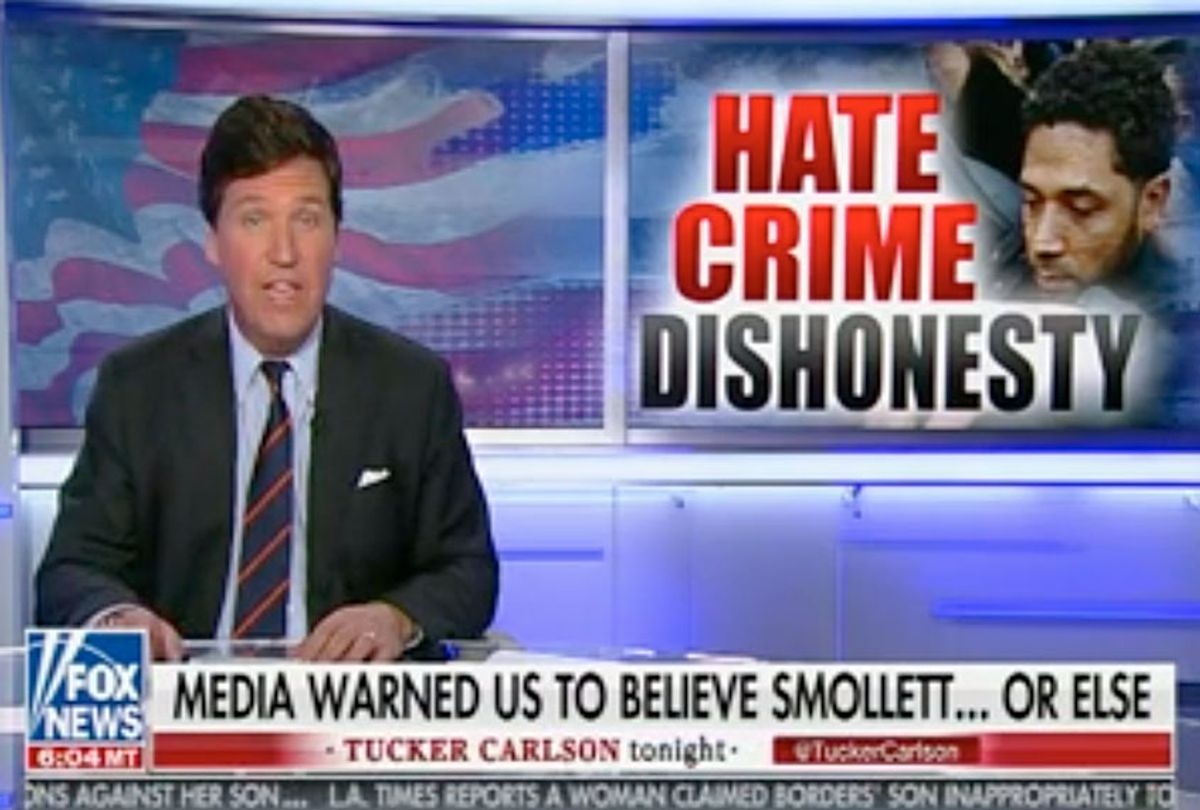 "The problem is there aren't that many hate crimes occurring in the country," Carlson said, in response to the latest news about "Empire" actor Jussie Smollett. "So, instead, reporters take their numbers wholesale from partisan activists who pose as researchers or from wholly fraudulent organizations like the Southern Poverty Law Center. These groups use moral panics to gin up fund-raising. They get rich doing it. So, of course, they continue."

The Southern Poverty Law Center, in actually, is a non-profit that tracks hate groups across the U.S. and reports their activities to the public, law enforcement agencies and the media. The SPLC released a report last week that reveals the number of hate groups across the country surged to 1,020 in 2018 – a 20-year high – and that extremists today include white supremacists, black nationalists and neo-confederates. Additionally, the latest FBI statistics from 2017 show that hate crimes increased by 30 percent  across the country. (The FBI has not released figures for 2018.)

Carlson, however, did not mention those numbers on his primetime show.

"It's just not a very hateful place. So they have to make them up," Carlson said. "How do they do that? They do it – and this is key – by counting accusations as crimes. An accusation is not the same thing as a crime – it's not even close."

The Fox News host alleged the press issued the following message surrounding Smollett's allegations:  "Shut up, and believe it – or else you're a bad person, if not clinically insane."

Smollett received international media attention last week after he claimed he was brutalized in a racist and homophobic attack in Chicago. As an investigation into the actor's allegations unfolded, Smollett was arrested Thursday morning by Chicago police for allegedly filing a false police report. Law enforcement officers later claimed that an alleged attack against Smollett was actually a "publicity stunt" devised by the actor over a desire for a better salary. Smollett, meanwhile, has maintained his innocence.

The actor's case, according to Carlson, reveals that "the few people who are willing to think for themselves turned out to be absolutely right, and the press is scrambling to explain how exactly did that happen. How could reporters who are literally paid to be skeptical have fallen for such an obvious lie?”

"This is the new official story, the one you are going to be hearing for a long time, the one your kids will be learning about in school," Carlson continued. "And it's this: A specific hate crime may not have happened in this case, but hate crimes overall are incredibly common. And the incidence of them is rising."

"The problem with what you just heard is it's a crock. It's totally false," the Fox News host added. "In fact, it's probably untrue. Anyone who says otherwise — like the people you just heard — is either intentionally misleading you or doesn't understand the numbers — and that would include most journalists. Type in the phrase 'hate crimes' into Google, and you will see story after story claiming that thousands of these atrocities take place every year in our country — and the incidence of them is rising."

Watch the full segment in the clip below: