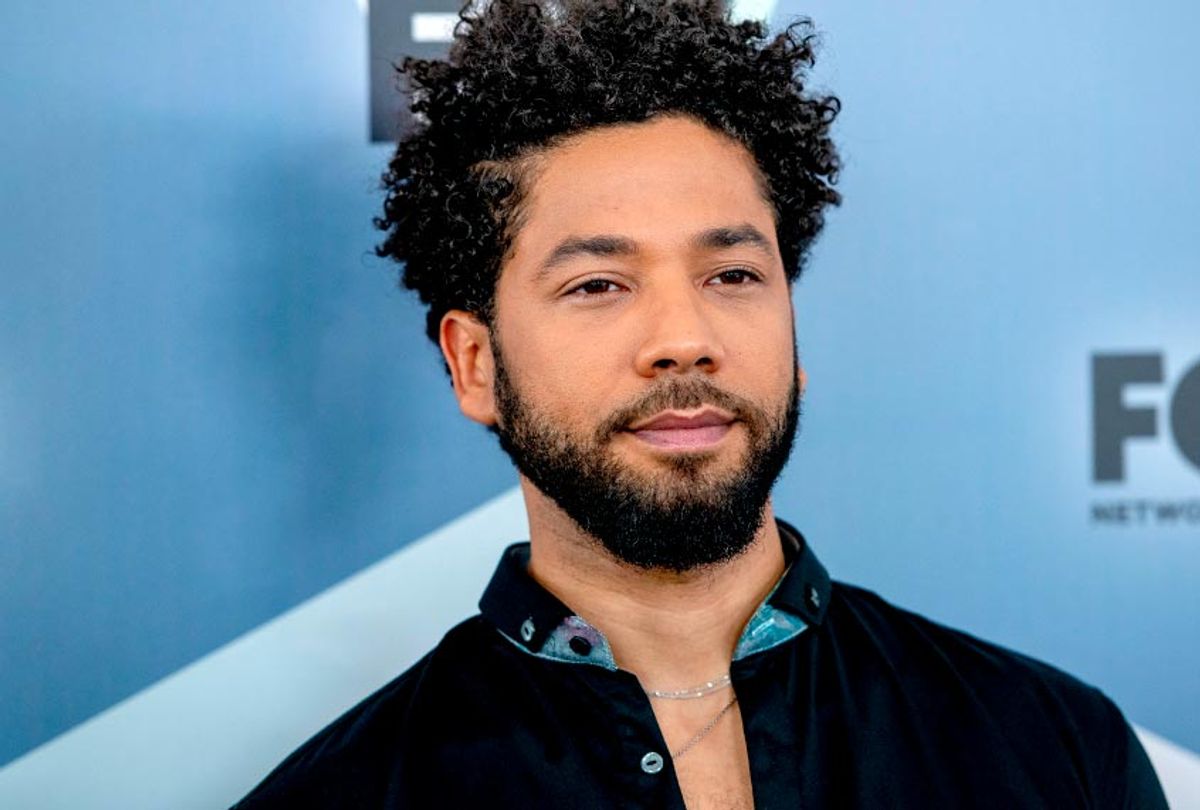 "Empire" star Jussie Smollett was brutally attacked early Tuesday morning in Chicago and the incident is being investigated as "a possible hate crime," police say, according to multiple outlets.

"Police say two people approached a 36-year-old man and got his attention by yelling out racial and homophobic slurs," the Chicago Tribune reported. "The offenders began to 'batter' the man with their hands and poured an unknown chemical substance on him, according to police." Before fleeing the scene, one of the attackers wrapped a rope around his neck, police added. Smollett took himself to the hospital and is said to be in "good condition."

"Given the severity of the allegations, we are taking this investigation very seriously and treating it as a possible hate crime. Detectives are currently working to gather video, identify potential witnesses and establish an investigative timeline," a CPD spokesman said in a statement.

"Jussie is a true champion for LGBTQ people and is beloved by the community and allies around the world," the organization GLAAD said in a statement.

On the Fox show "Empire," which premiered in 2015 and films in Chicago, Smollett's character, musician Jamal Lyon, is gay. And the actor confirmed his own queerness to Ellen DeGeneres in 2015 after an appearance on her show. "There's never been a closet that I've been in," Smollett said, adding that he simply prefers to not talk about his personal life."But it is in no way to hide or deny who God made me. You know?" he continued. "My mama knows. My mama likes me a lot."

The horrific attack against Smollett adds to a particularly vicious month of discrimination, violence and neglect against the LGBTQ community. Last week, the Supreme Court voted in a 5-4 decision to allow President Trump's transgender military ban to go into effect. While the policy is still on hold for now, pending an injunction, many lamented the cruelty of the action against LGBT people and what it means for the future of this country.

"This is a survival issue," Chase Strangio, attorney at the ACLU, told Democracy Now! "This is a question about whether the largest employer in our country can tell transgender people that they are not welcome, that they cannot actively be who they are and retain their employment. So we should be incredibly concerned not only about what this means for trans people, for our employment, for our healthcare, for our survival, in absolutely every context, but also whether or not we’re going to accept a government policy that’s premised on the idea that we don’t exist, and that if we do exist, we should not be protected in any way."

That same week, The Atlantic published a bombshell exposé detailing decades of sexual abuse allegations against "Bohemian Rhapsody" director Bryan Singer. A key theme throughout the decades of alleged abuse is the accusers were gay boys and young men unprotected by wealth or family, making them especially vulnerable to seduction, manipulation and abuse. Cesar Sanchez-Guzman, who has accused Singer of rape, claims the director said to him after the alleged attack, "Nobody is going to believe you." (Singer denies all allegations of sexual misconduct.)

Earlier this month, Timothy Dean was found dead inside prominent Democratic donor Ed Buck's apartment in Los Angeles, marking the second gay black man to be found dead there in the span of 18 months. Buck has not been arrested or charged with any crime, though Dean's death is still under investigation. LaTisha Nixon, mother of the first alleged victim, Gemmel Moore, believes Buck should be held responsible. "He will not stop," she  wrote on Facebook. "He will continue to hurt and kill black men. There are 2 people now that have lost their lives."

Days later, Vice President Mike Pence's wife Karen Pence returned to the classroom to teach art at a private Christian elementary school that bans LGBTQ student and parents and refuses admission to anyone who supports sexual/gender equality. Potential employees also must sign a pledge affirming that marriage can only be between a man and woman and acknowledge that "homosexual or lesbian sexual activity, polygamy, transgender identity" is in violation of the school's moral code.

These events and revelations also magnify and bring into context the controversy around Kevin Hart's previous homophobic tweets and jokes, which the actor and comedian has repeatedly dismissed as old news during the controversy that ensued when he was announced as Academy Awards telecast host. He chose to give up the Oscars hosting gig rather than apologize in a meaningful way and address the real harm at the core of his jokes, which described wanting to use anger or force to prevent his son from being gay. "I'm going to ignore it because it's 10 years old," Hart told DeGeneres after he stepped down from the job. "I've apologized for it. I'm not going to pay it any mind, because when you feed into that stuff, you only add more fuel to the fire."

The violence against Smollett, against transgender people, against queer youth and their families, makes patently clear that jokes at the expense of the LGBTQ community are not only never funny, but dangerous, as they contribute to a general climate of intimidation and derision which can enable, encourage, or overlook violent crimes. Journalist and activist George M. Johnson wrote on Twitter Tuesday: "Little homophobia becomes big homophobia. Those jokes become thoughts Those thoughts become actions Those actions become death. Any homophobia or defense of it is a threat to the existence of LGBTQ folk." It is a simple, yet urgent point that Hart and others who defended him refused to grasp.

But this specific attack against Smollett also illuminates the connectedness of racism and homophobia under the guise of white supremacy, and the intersections of violence felt specifically by queer people of color. A fight against white supremacist violence — whether that takes the form of the policies of the current administration or cold-blooded hate crimes against marginalized people — is recklessly incomplete without the inclusion of homophobia and transphobia and a vision to eradicate both.

While hate and violence against anyone who is not white, cisgender, heterosexual, Christian, American-born and male have been wide-reaching and enduring in the U.S., they gain strength from the unrelenting xenophobic fear-mongering by the powerful. And yet — even worse — this climate is allowed to flourish without consequence when an administration and constituency holds up each individual or potential act of violence from an immigrant, or a Muslim, or a black person, as justification for more hate in policy and ideology, but ignores the ever-growing violence of right-wing extremism in this country and abroad. White supremacy was at the center of the Pittsburgh synagogue shooting, too many mass shootings to list off, and now, according to the police, in the attack against Smollett Tuesday. When will we as a nation say enough?