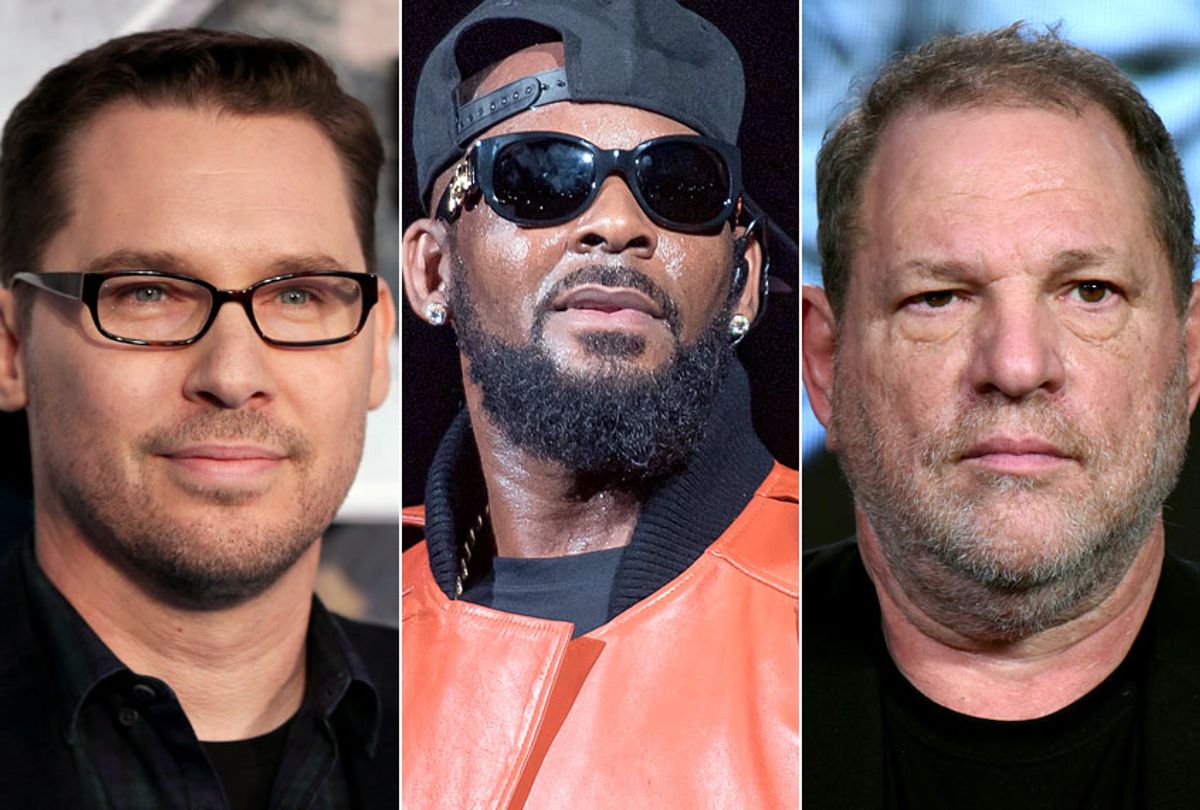 Director Bryan Singer, who was fired from the helm of the Oscar-nominated "Bohemian Rhapsody" during production, is at the center of a new bombshell #MeToo exposé from The Atlantic, detailing decades of allegations of sexual abuse of underage and teenage boys. The article is the result of a 12-month investigation that includes the reporters speaking with more than 50 sources, and publishing accusations from four men who've never told their stories publicly before. (Singer denies all allegations of sexual misconduct.)

Like Harvey Weinstein and R. Kelly before him, allegations of sexual misconduct have dogged Singer for decades. And, as with the other two one-time industry titans, the depth and breadth of the stories, heard by people both inside and out of the industry, have not yet hurt the hit-maker's career. It's a devastating yet familiar story: Wide circles of complicity shield powerful men from accountability, time and again, because profitability trumps the safety and well-being of the most vulnerable of those around them. The accusations against Singer come mostly from queer men who were minors at the time of their alleged encounters.

"Almost from the moment his star began to rise, Singer, who is now 53, has been trailed by allegations of sexual misconduct," The Atlantic reported. "As one prominent actor told us, 'After the Harvey Weinstein news came out, everyone thought Bryan Singer would be next.'"

But as one of the top directors in Hollywood, whose movies have earned more than $3 billion in the box office, the jobs continue to roll in. Aside from the success and accolades of Golden Globe-winning "Bohemian Rhapsody," (which he was fired from for unrelated reasons, but remains credited) Singer was tapped this fall to direct "Red Sonja," in which the protagonist is a survivor of sexual assault.

The accusations against Singer range from seduction and manipulation of underage boys to rape. But what remains the same is the alleged victims' years of trauma following their alleged encounters with Singer, including substance abuse problems, depression, PTSD and overall instability.

Like R. Kelly, who allegedly preyed on black girls who were predominantly from low-income backgrounds and lacked systems of support, "[t]he portrait of Singer that emerges is of a troubled man who surrounded himself with vulnerable teenage boys, many of them estranged from their families," The Atlantic reports. "Their accounts suggest that Singer didn’t act alone; he was aided by friends and associates who brought him young men. And he was abetted, in a less direct way, by an industry in which a record of producing hits confers immense power: Many of the sources we interviewed insisted, out of fear of damaging their own career, that we withhold their name, even as they expressed dismay at the behavior they’d witnessed."

In The Atlantic investigation, Victor Valdovinos alleges that Singer molested him when he was just 13 years old, on the set of Singer's third film "Apt Pupil," which was filming at his middle school near Los Angeles. He claims Singer enlisted him as an extra and his father said he remembers dropping Valdovinos off for filming and thought his son might become an actor.

But he didn't. At 16, Valdovinos became a parent, was kicked off the football team and dropped out of high school for six months. Later he went to jail and has struggled to keep a job. "What if he never did this to me—would I be a different person? Would I be more successful? Would I be married?" he questioned, according to The Atlantic. And when the Weinstein floodgates opened, "Valdovinos thought, 'Me too—only I was a kid.'"

Around the same time of "Apt Pupil," Singer was becoming well-known in the gay Hollywood scene, according to the Atlantic, and mostly for throwing pool parties at his house, in which a source says appeared more like high school parties because the guests looked so young.

A man The Atlantic calls Ben described himself as "fat and socially awkward" when he says he met Singer, shortly after his family had kicked him out when he was just 16. According to the story, Ben "says he was passed around among the adult men in Singer’s social circle" and at the time wasn't able to separate the attention he was receiving from the alleged sexual abuse. Ben says he and Singer engaged in sex acts when he was 17 or 18. "He would stick his hands down your pants without your consent," Ben said. "He was predatory in that he would ply people with alcohol and drugs and then have sex with them."

A man The Atlantic is referring to as Andy claims that he met Singer through the Digital Entertainment Network orbit, a company — which Singer invested in — that planned to produce television and films for gay teens. He says the first time he and Singer allegedly had sex, Andy was 15, and Singer was aware of his age. He also claimed that Brad Renfro, then 15, who starred in "Apt Pupil," initially watched them uncomfortably. Renfro died of a drug overdose in 2008.

Like Andy, Eric (not his real name) says he met Singer via DEN and had sex with him when was 17. "If you weren’t young and cute enough to be their boy, you could still ingratiate yourself by bringing boys to them," Eric told The Atlantic. "That’s how I met Bryan, and that’s how I wound up at the DEN estate—people trying to ingratiate themselves."

Eric now works in the film industry, but a decade of therapy has taught him that "adults are supposed to look out for kids." He also says he regularly attends Alcohol Anonymous meetings and has met other men who allege that they've been abused by Singer. "There’s a bunch of us," Eric told The Atlantic. "It’s like, 'You were one of Singer’s boys? Me too.'"

In December, Cesar Sanchez-Guzman filed a lawsuit against Singer, claiming he was raped by him in 2003, when Sanchez-Guzman was 17. His parents are born-again Christians and Sanchez-Guzman said he hid his sexuality growing up and in the years when he met Singer. After the alleged rape, he says Singer said to him: "Nobody is going to believe you."

The details included in The Atlantic investigation are disturbing and painful to read, especially on the longterm effects Singer's alleged victims have endured and the web of those around Singer who enabled his alleged predation, both the people in Singer's immediate circle who allegedly procured underage boys and the Hollywood executives and collaborators who, year after year, tuned out the stories alleging misconduct.

There's a theme that unites Singer's alleged victims: they were unprotected, mostly gay, mostly alienated from family and resources, which made them vulnerable to being seduced by and manipulated through attention, protection, and promises that their lives could change if they just went along. Like R. Kelly's alleged victims, many of whom were aspiring singers themselves, these kids were allegedly sold out and exploited before they could even come into their own. Those who have been complicit to these patterns of abuse justify it with profit and access, by saying they didn't know what was in plain sight and well known, by holding up a successful song or film as evidence that a product is worth more than a child’s well-being.

Singer responded to The Atlantic's story, categorizing it as a "homophobic smear piece" that was timed to take away from "Bohemian Rhapsody's" success. He described one of the reporters as a "homophobic journalist who has a bizarre obsession with me dating back to 1997. After careful fact-checking and, in consideration of the lack of credible sources, Esquire chose not to publish this piece of vendetta journalism." The authors of The Atlantic investigation say Hearst executives killed the Singer exposé after months of reporting, fact-checking and vetting, suggesting that perhaps the circle of complicity  —or at least uneasy silence — spans multiple industries.

Now that the story has been reported, who in Hollywood will stand up for the men who spoke out? "Bohemian Rhapsody" star Rami Malek said he was "not aware of" the allegations against Singer. "Who knows what happens with that," he told the Los Angeles Times, "but I think somehow we found a way to persevere through everything that was thrown our way."

Over the past year and a half of the mainstreaming of #MeToo, we have witnessed how pervasive experiences of sexual violence are and simultaneously how difficult justice is when teflon systems devalue the less powerful, and how powerful men, including alleged sexual predators, understand intimately how to operate without liability: by targeting kids that much of society doesn't care about, including black girls and queer teens, or by abusing women with less power and threatening them with personal and professional punishment if they refuse to go along. (Meanwhile, a privileged white kid in a MAGA hat gets a "Today" show interview and sympathy from the president.)

Moving forward, we are tasked with not just believing the stories and experiences of victims of sexual abuse, but also with refusing to accept the same predictable pleas of ignorance from those in the wide orbit of abuse. In the cases of Harvey Weinstein and R. Kelly, late-in-the-day denouncements meant to absolve collaborators and enablers felt like hollow gestures, carrying as they did little professional risk by the time many spoke out. But they knew. Everyone knew.

As Hannah Gadsby said in her poignant Netflix special, "The moral of our story is we don’t give a f**k about women or children. We only care about a man’s reputation." And until we upend the systems that allow power, profit, fame, reputation, access and connections to outmaneuver the welfare of children, our story will remain the same.