Who are the real thugs in America? Right-wing terror and the Trump era

Coast Guard officer Christopher Hasson planned massive carnage. Yet he and people like him are not called "thugs" 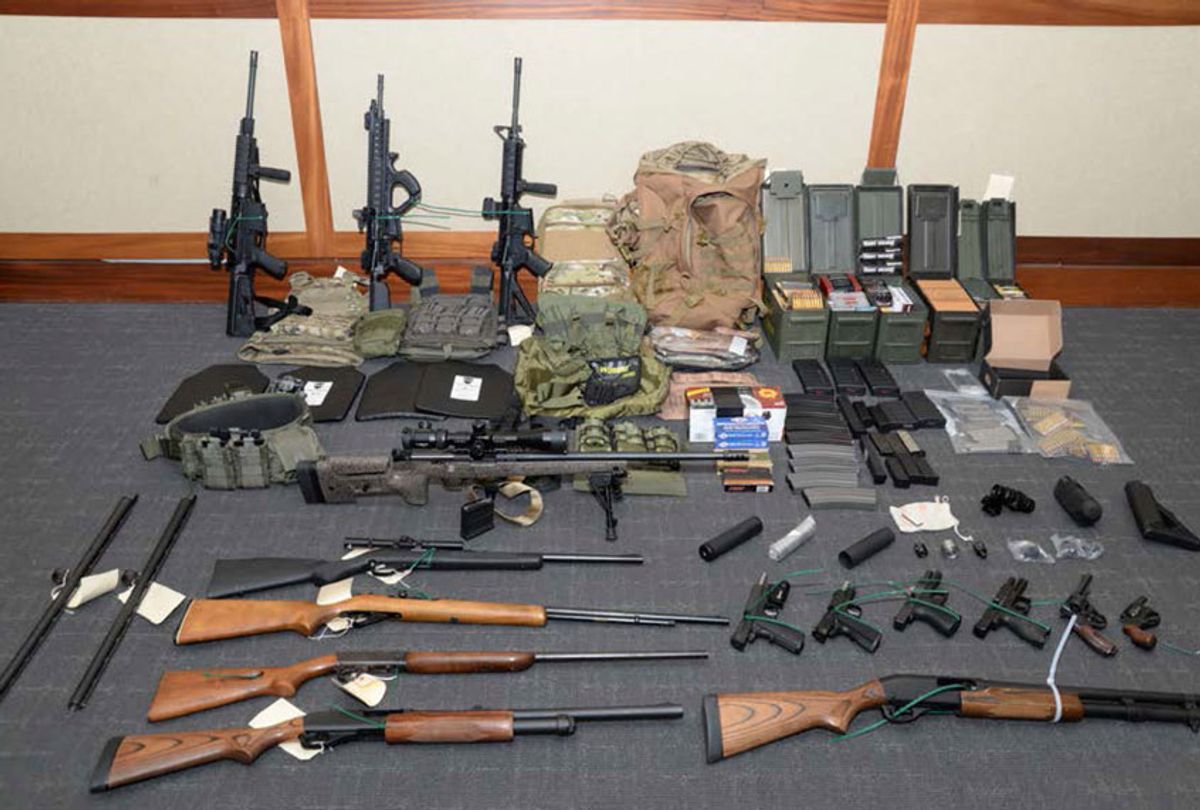 Hasson is a white supremacist and likely also a neo-Nazi. According to documents included in last week's court filing, his plan was to commit mass murder in order to start a "race war." His targets were prominent Democrats and members of the "liberal" media, apparently including Joe Scarborough of MSNBC, Rep. Alexandria Ocasio-Cortez, D-N.Y., and Sen. Richard Blumenthal, D-Conn. Hasson had amassed a significant arsenal that included at least 1,000 rounds of ammunition, 15 assault rifles and other firearms. As indicated by his internet search history, Hasson's right-wing terrorist campaign was closely allied to his support for Donald Trump. He had searched such terms as “what if trump illegally impeached” and “civil war if trump impeached.”

As I have observed on many previous occasions, there are questions that are rarely asked when white men plan or commit acts of mass murder and domestic terrorism. How and where was this person "radicalized"? What news media and other sources of information did he consume? Did his religion lead him to do this? What values were taught in his home? When will leaders of the "white community" speak up and denounce such acts? Is there a culture problem in White America? Should people who resemble Hasson, or who share his values, be barred from entering the country?

Donald Trump has issued an obligatory comment about Hasson's arrest, without directly condemning him. Why should he be expected to? President Trump is an instigator of this violence. Foot soldiers such as Hasson see themselves, with some justification, as following through on Trump's commands and encouragements. When Trump repeatedly declares the free press and the Democratic Party to be the enemies of the people, he is engaging in what is known as "stochastic terrorism" or scripted violence. Through that strategy the president and the right-wing media can beat the drums of violence and then deny responsibility for an outcome they encouraged.

Donald Trump is accounted as a hero and champion by neo-Nazis and other white supremacists. As former Republican National Committee chairman Michael Steele observed last Friday on MSNBC, "Why would we be surprised that a self-proclaimed nationalist would not speak out against a self-proclaimed white nationalist? ... These are his people. And he’s not going to thank law enforcement because he’s probably not happy about what law enforcement did.”

Hasson is part of a larger cultural problem in America in the age of Trump. A new report from The Southern Poverty Law Center suggests that there are now a record number of hate groups in America. Heidi Beirich, director of the SPLC's Intelligence Project, said in a statement last Wednesday:

The numbers tell a striking story – that this president is not simply a polarizing figure but a radicalizing one. Rather than trying to tamp down hate, as presidents of both parties have done, President Trump elevates it – with both his rhetoric and his policies. In doing so, he’s given people across America the go-ahead to act on their worst instincts.

The SPLC and other organizations have also documented how Trump's ascent to power has been accompanied by an increase in hate crimes and other violence targeting nonwhites, Muslims, Jews, gays and lesbians and other groups that Trump and his followers deem to be the enemy Other.

Christopher Hasson may not have belonged to an organized conspiracy, but he is not a "lone wolf" either. He is but one member of a dangerous rogues' gallery of right-wing domestic terrorists in Donald Trump's America.

We do not characteristically call such people "thugs." Why not? In America that word and the accompanying image is a slur and stereotype that is largely applied to black men and black boys -- and sometimes to black women and black girls.

"Thug" functions as a powerful signifier and object in America's collective subconscious. Even when not explicitly stated or uttered, the idea of black men and black boys as "thugs" -- meaning that they are preternaturally dangerous, inherently criminal, predatory, dangerous and violent, hyper-sexual, lacking in impulse control, socially irresponsible, and likely mentally or morally deficient -- is part of the country's collective subconscious and popular imagination.

This cultural script is so powerful that through the white gaze it can transform innocent black bodies into the perpetrators most responsible for the violence against them -- and thus responsible for their own suffering. This victim becomes the victimizer. Video footage of police officers shooting, beating, maiming or otherwise brutalizing unarmed black people is often twisted through white racial paranoia into showing a "scary" and "dangerous" person who is "armed with his incredibly strong, scary self". Through this negrophobic distortion of reality, to be black is to possess malevolent superpowers, almost to be a supernatural bogeyman or supervillain.

In America and around the world the idea (and often the literal person and body) of the black "thug" is also loved and hated, feared and desired. It is an object of desire and also disgust, something to be profited from but also to be exploited and marginalized. This is seen across the centuries in America, from the mythic "black beast rapist" of Jim Crow America forward to commercial hip-hop and Fox News crime hysteria in the present day. As Martin Luther King Jr. powerfully observed, to be black in America has historically meant to be made into a human thing that can and should be oppressed and exploited. The black "thug" is a manifestation of the "thingification" of black people.

But who are the real thugs in America? By his own admission Donald Trump is a sexual predator. (He later claimed that was idle boasting. No one believes him.) He has likely engaged in criminal behavior, including as tax fraud and other financial crimes. Public evidence points toward the compelling conclusion that Trump and his inner circle likely conspired with a hostile foreign power to manipulate the 2016 presidential election.

As the New York Times recently reported, Trump behaves like a Mafia crime boss who uses threats, bullying and other means of intimidation to secure loyalty -- and to punish any person who dares to challenge him. In keeping with his thuggish values and behavior Donald Trump has placed people in the highest levels of the American government who are manifestly corrupt and will do anything to aid and abet his illegitimate regime for their personal profit while they assault American democracy.

Donald Trump and other elite white men who share his values and do his bidding (along with others who may not be white or male) are the real thugs in America. But "white" and "thug" are rarely placed together in American public discourse. For many people, to make such a linkage is incomprehensible, unimaginable, offensive and rage-inducing.

To our own detriment as a country and a people, we do not call Donald Trump and his more violent supporters dangerous thugs. But that's what they are.